Election Tour 2017: Three in a bed, racing news and Cilycwm


Anyone hoping for smut after reading that headline will be sadly disappointed, but now that the lists of nominated candidates have been published, one or two interesting details have emerged.

For example, UKIP's candidate in Llandovery, Cliff Johnson, turns out to be hedging his bets by also standing for UKIP in St Thomas ward, Swansea. Will he fall at the first hurdle?

Three in a Bed

As we saw last week, Lee Waters AM (Lab., Barry Island) is extraordinarily sensitive about telling voters where he really lives, and has gone to great lengths to give voters in Llanelli the impression that he lives at a modest semi-detached bungalow in New Zealand Street.

This seems to be catching in the Labour Party, with no fewer than three Labour candidates in the county council elections all saying that their home address is 27 Llys Gwenllian in Kidwelly.

Cat swinging at this modest address is definitely out. 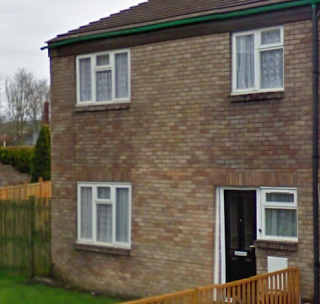 Anyone drawing up a list of council wards least likely to provide anything in the way of political excitement would rank Cilycwm 58th out of the 58 wards which make up Carmarthenshire. A not dissimilar ward over the border in Powys has the distinction of not attracting any candidates at all, and in quite a few other councils, wards like Cilycwm would most likely go uncontested.

But Cilycwm could give even some of the more turbulent wards in Llanelli a run for their money.

The ward was held for years by veteran Independent Tom Theophilus who finally departed from the Council Chamber in his ninth decade. In 2012 fellow blogger Jacqui Thompson came within 44 votes of unseating him, with Matthew Paul, then a Tory fox bothering barrister, trailing a distant third.

Things really hotted up in 2016 when seven candidates jostled for first place. In the event, it was comfortably won by Plaid, with Arwel Davies (Independent) coming a not-too-close second, Labour third and the now independent Matthew Paul fourth.

This time round the field is down to a more modest three candidates, with Jacqui Thompson having decided not to stand. Plaid had a very strong candidate lined up who had to withdraw very late in the day after he was refused leave to stand by a company he works for.

Matthew Paul's presence on the ticket once again and the possibility that he may finally be in with a chance, will probably be the cause of some twitching in the Executive Suite at County Hall, where the unique prospect of having a councillor who has seen a court room from a vantage point other than the dock will be unwelcome news for the legalistic Mark James and his "cavalier at best, incompetent at worst" inhouse legal team.

At least he can't come fourth this time.

Standing once again for Labour is Maria Carroll who runs a local shop and broadcasts from her social media platforms to the People's Republic of Cilycwm. Whenever Maria's name is mentioned, a well-known phrase which includes the words "box of frogs" almost always follows in the next breath.

Not long ago it was being put about in Llanelli Labour circles that Maria managed Tegwen Devichand's media relations, specifically Dafen Dolly's "dummy" Facebook account set up for dummy voters, and that it was all Maria's fault that somehow material from the neo-Nazis in Britain First had been shared.

This was grossly unfair on Maria because the offending material (now deleted) appeared on Dolly's personal Facebook page, not managed from Cilycwm.

Relations between the two may understandably be a little tense as a result.

Like Tegwen Devichand, Maria also runs personal and political social media accounts, although there is not much to choose between the two.

While most residents of Cilycwm will be worrying about the likely devastating impact of Brexit on Welsh agriculture, milk prices, school closures, the spiralling cost of living, the exodus of local young people, the language and the state of the roads, the things which have really got Maria worked up recently include Ken Livingstone's suspension from the Labour Party, Academy Schools in England (there aren't any in Wales), and the internecine warfare raging in the Labour Party between the Corbynistas and Len McCluskey on the one hand, and the forces of evil led by Labour's Deputy Leader, Tom Watson MP, on the other.

Maria may not have much to say about milk prices or slurry management, but she does dispense invaluable political guidance from her Twitter account to the toiling proletariat of Cilycwm.

What should we think about Ken Livingstone, for example? Maria's line seems to be that Livingstone is a washed-up old has-been, but that dark forces have whipped up a campaign against him, with the result that the whole affair has become politicised, when clearly it has nothing whatsoever to do with politics. 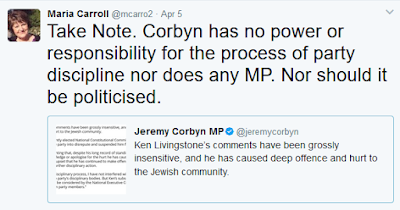 Livingstone was up before Labour's National Constitutional Committee on charges of bringing the party into disrepute and not Anti-Semitism, she says. FACT!

As for that bourgeois imperialist lackey Tom Watson, the party's deputy leader has accepted a donation from Sir Trevor Chinn, vice president of the Jewish Leadership Council, even though he is supposed to be leading Labour's work on fake news, she tells us:

Fortunately for Maria, the Jewish vote in Cilycwm is unlikely to be a factor in the election on May 4, but judging by her social media feeds, the county council elections are much less important than the battle for control of Unite and her very own Twitter vote on whether or not Tom Watson would win another election to become Deputy Leader. 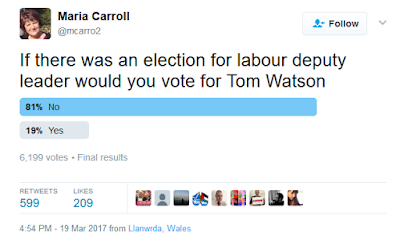 Maria is unlikely to attract 6,199 votes in Cilycwm.

I believe the Tories left Mathew Paul rather than the other way around. Although being a "remainer" is bad enough in Carms Tory circles, standing in a by-election against an official Tory candidate while being a paid up conservative Member s a hanging offence. Had he stayed a Tory, definitely an expulsion matter.
He should have taken some legal advice from Cllr Mansel Charles who in the past quite properly resigned his membership to stand against Plaid Cymru in one council election and rejoined to be their official candidate in the next.

I would rather read about policies! There's way too much character assassination in virtually all media these days.