Election Tour 2017: Carry On in Carmarthen

Ifan Morgan Jones, lecturer in journalism, author and generally the fount of all knowledge, was pontificating on Twitter yesterday that there were a lot of 'unvetted candidates' saying silly things on social media, and he recommended that they should lock their accounts.

There are several things wrong with this. Firstly, wouldn't the world be a dull place if our would-be masters only spoke and tweeted on message, and would it not be a profoundly dishonest and undemocratic way of conducting election campaigns? And if Ifan is right, wouldn't it be sensible to wire candidates' mouths shut and remove all writing materials from them for the duration, because some of the daftest things are said and written in real life away from social media websites?

Five weeks ago at the beginning of his campaign he got into a spot of bother for producing English-only campaign literature and then talking a lot of nonsense about Welsh-medium education.

In the ensuing row, he locked his Twitter account and had a major spring clean before letting the public back in.

Charlie is in his early 20s but really belongs back in the 1950s. A committed evangelical Christian who is against same sex marriage; wants to see overseas aid cut; rushes to the defence of the rich for paying more tax than the rest of us; wants to see high earners paying less tax; thinks that free movement is an "absurd fantasy"; opposes sex education in schools and worships Theresa May, while retweeting fawning messages congratulating Mrs W on turning 91.

Marriage is for procreation only, says Charlie, who would like to stop people who love each other from tying the knot for any other reason, just as he would like to deny young people living in the UK the right to go and live and work in another country.

He's gone from nappies to being a fully-fledged Felix Aubel without passing through Aubel's pinko lefty phase.


It's the sort of thing Tory columnist Matthew Parris was talking about in The Times last week, except that Charlie is under 30: 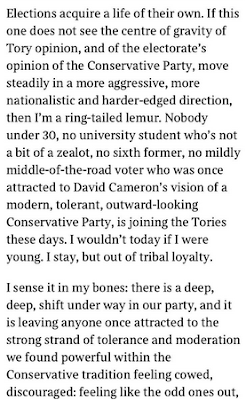 But you don't need Twitter to say stupid things. Introducing himself at a hustings in Carmarthen, Charlie Evans gave his name and told his audience that he worked in the lingerie department of Marks & Spencers. "So, ladies, if you would like to come along for a personal fitting...."

If knicker sales at M&S in Carmarthen go into a sudden decline, this may explain it.

And there we have our Tory candidate. A sort of evangelical Leslie Phillips with intolerant views straight out of the Steve Bannon playbook. Ding dong, ladies!

Equally bonkers are Matthew Thomas and Julia Ault, a Labour duo in Camarthen West next door.

Gwynfor Evans won a sensational victory at the Carmarthen by-election in 1966, taking the seat from Labour. He fought all his life for the vision of a Wales free to govern itself and choose its own destiny. He was both a nationalist and an internationalist. Mahatma Gandhi was a major influence in his thinking.

The Labour Party employed a succession of dirty tricks against him, and he was convinced that Wales could never progress under Labour. Fifty years on, and Wales remains one of the poorest parts of Western Europe, the main difference being that we now have a partly devolved Labour government, with Labour MPs still firmly opposed to transferring power from Westminster.

Against that background, and knowing that many voters in Carmarthen will be acutely aware of who Gwynfor was and what he stood for, you would not imagine that the Labour Party would try to claim Gwynfor Evans for themselves.

You would be wrong.

Gwynfor was a pacifist and would have been horrified by Labour's decisions to go to war in Iraq and Afghanistan. He would have deplored the creeping militarisation of public life under Blair and Brown now being pursued enthusiastically by the Tories - all those march pasts, new war memorials, commemorations and pageants. But no, the real jingoists are Plaid Cymru, according to Matthew Thomas and Julia Ault: 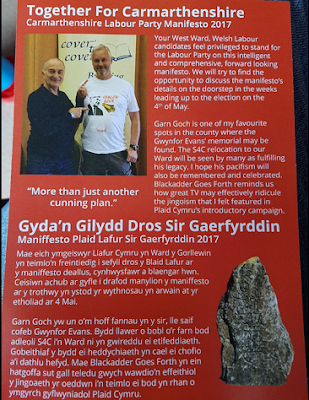 Perhaps this is all part of Labour's cunning plan.

I doubt if I shall be able to sleep after reading that Felix Aubel went through a "pinko lefty" phase. We all know he has 'eccentric' tastes in clothing, but I bet he really let himself go when he was fighting 'the system'.

The problem with pacifism and pacifists dealing with a rampant aggressor, like Hitler, is that the Germanic language would have prevailed here, not Welsh, if he had won the war.
Thank God we had people in the country who were prepared to give their life for the fight against the dictator, which also enabled the Welsh language to be preserved.