There are still 10 days to go before polling day, but the growing popularity of postal voting means that most of those who are likely to vote have already done so.

Percentages will vary from ward to ward, but it is safe to assume that people who request postal votes are more likely to vote than those who haven't. The result is that for the rest of this campaign, candidates are chasing the votes of probably only 15% of the voters in their wards.

This may help explain why Tegwen Devichand and Jeff Edmunds have started campaigning outside their own wards, and have now popped up in Five Roads where veteran Independent Jim Jones is defending Glyn ward.

Standing for Labour is Stephen Donoghue, who not long ago left Plaid to board Captain Corbyn's sinking ship, while Plaid's candidate is John Williams. There is also a Tory, James Hogg.

There are no local opinion polls, but nobody in their right minds is expecting Labour to take back control of the county council after 4 May, and the likelihood is that they will be reduced to a small rump. The only hope, and it is now a vanishingly small one, that they have of getting back into power is in coalition with the Independents.

Llanelli Labour's tactics in this election seem almost to have been designed to ensure that nobody, least of all the Independents, will want to go anywhere near them after 4 May.


Something which should annoy all voters are the meaningless claims put by so many candidates on their election material - and yes, all parties are guilty.

Someone once said that an effective test for bullshit is to insert the word not in a sentence. If the result is something nobody would ever say, then you are being served up with a pile of fresh, steaming manure.

"I will stand up for my community", is the classic.

Here is Labour's leaflet for the county council elections in Llannon: 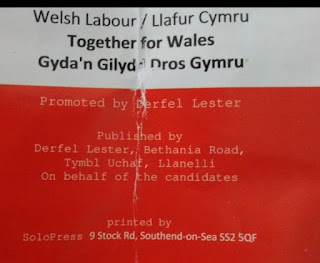 Meanwhile, here is Labour's leaflet for the community council elections, this time printed in Llanelli. Only some of the mistakes are underlined, but voters in this strongly Welsh-speaking community will be surprised that Labour does not even know how to spell the name of one of the villages they hope to represent: 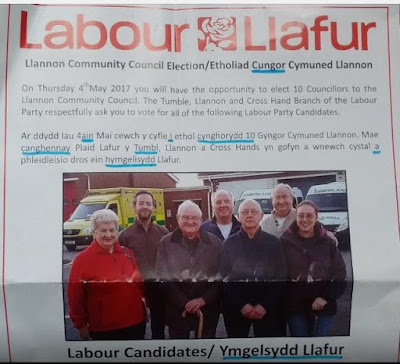 It is perhaps significant that the word "respectfully" has not been translated into the Welsh text.
Posted by Cneifiwr at 06:51

Good God . Wheres the abc/spellcheck ?
So all labour candidates have given printing jobs to england instead of supporting local printing buisnesses in carmarthenshire ?
It seems they cant/wont when it comes out of their pickets . No wonder they have so many new banners and signs .
As for the coalition ���� it seems plaid/indy work well clearing lab/indy backlog . I honestly cannot see any mad hatters tea party with the queen of hearts again . Thats if she is returned .

With Dafen Dolly and Jeff Edmunds' help, Steve Donohue is sure to bomb! And people in Ponthenri (and in the club) have long memories....

Seems Steve Donoghue fell out campaigning and has relieved himself of chair duties . Any truth to that ?

Does Jim Jones fancy his chances to be the new Affiliated Independent group's leader? Generally the more opponents the less of a threat to a sitting councillor and Jim is loyal to the project.

I was a bit confused to find a "Llandybie Ward News" sub-titled Bonllwyn, through my letter box in Heol Ddu Ward, so its not just the Reds that have trouble in the pamphlets. Having grilled a Kipper (twice), roasted some Whitebait and simply shouted away a Red Snapper's proxy, it would have been interesting to hear someone try to justify the claim they've "done a far better job than the previous administration".

There's an epic quote 'Unless you are octopus with no bones in your arms...' in this youtube instructional
https://youtu.be/OyMYn_EdbPM?t=127 (2:07). I remember seeing it and thinking of 'Dai B.D.', the current less-than illustrious council leader, and wondering if octopuses lack backbones too - per the appalling mistreatment of caebrwyn and all that dare to ask questions.

It's not often I empathise with the French, but hearing an interviewee today describe their choice of candidates as voting for "cholera or the plague", I knew where they were coming from.

I have one remaining candidate that's failed to attempt or score delivery of a pamphlet. And two votes. The clock is ticking....


wrt to in-house printing of PC material (not at presumed bulk/batched pre-order discount - which at least does demonstrate a modicum of forward thinking, organisation and best-value), does it really support any local jobs? Are the "printers" volunteers or do they command NMW? Has the tax payer already financed the machine, toner, office space, software, heat, light, electric? I'd hope it wasn't our AM & MP doing the printing - their time would have been better spent replying to their constituents.

Almost all of Plaid's colour leaflets are printed by Gwasg Dinefwr in Llandybie;you can't get much more local than that.None of Plaids leaflets are printed on equipment paid for by Westminster or Cardiff.Jonathan Edwards and Adam Price certainly do not waste their time printing leaflets!

The person who prints the leaflets in the Plaid Office, as well as designing a lot of them, and erecting placards and looking after candidates and generally organising things is probably on about half the national minimum wage at election times, but as compensation gets to eat a lot of biscuits.