Rob James who succeeded in dislodging Bill Thomas, one of Labour's best and most widely respected county councillors shortly after shipping up in Llanelli from Neath, recently sent Cneifiwr an e-mail marked 'Formal Complaint', giving this blog three days in which to respond.

He writes, "In your blog post, entitled 'Fear and Loathing in Llanelli', you have referenced a number of statistics on my attendance record in Neath Port Talbot. I believe this information to be incorrect, and this information has now been used in a Plaid leaflet. I would appreciate it if you could provide evidence of these figures and where you obtained them."

Residents of Bryncoch South may be wondering whether their councillor really lives where he says he does and whether, like them, he has been paying council tax in Neath Port Talbot.

Having been elected, Rob made his mark by turning up to one of the first meetings wearing shorts, a T-shirt and dark glasses perched on his head. The old-school Labour leader, Ali Thomas, was said to have been apoplectic.

Things went downhill from there, with increasingly rare appearances, and a fellow councillor said he could not recall a single contribution to a meeting by Rob during the first four years of his term in office.

Residents of Bryncoch South began to notice that something was not right, and in September 2016 a member of the public wrote to the council asking for details of Cllr James's attendance record.

In response, Neath Port Talbot council said that it did not publish attendance statistics for its councillors, although it was committed to open and transparent local government, because there was no statutory requirement to do so. It was however trialing some new software which it hoped would enable it to publish attendance statistics from May 2017.

In the meantime, the council decided to respond to the request under the Freedom of Information Act, and Mr Rhys George, the council's Electoral and Democratic Services Manager, provided Cllr James's record for the period from May 2012 to April 2016.

For the period from April to October 2016, Cllr James's record has been pieced together by trawling through the attendance records contained in meeting minutes.

The results are shown in the following table:

Having stood down from his various committee appointments in late 2016, Rob James's attendance record has shown a significant statistical improvement, simply because he has had far fewer meetings to attend.

In addition to complaining to Y Cneifiwr, Rob has said that he has also gone to Dyfed Powys Police with a formal complaint.

To save a lot of police time and expense, we can only hope that the HM Constabulary refers Rob back to his council's Electoral and Democratic Services Manager.

In a separate move, Rob James says he has complained to Dyfed Powys Police that a leaflet distributed by the two Plaid candidates in Lliedi, Colin Jones and Dyfrig Thomas, did not contain an address on the imprint, as required under electoral law.

Turning to his followers on Facebook, Rob has also found time to complain that Plaid has subjected both him and his young family to "hateful attacks on an almost daily basis", and that Plaid has been spreading lies about him.

The "lies" presumably refers to  Neath Port Talbot's attendance statistics. "Attacks on his young family" would be deplorable if there were a shred of evidence to back up Rob's claims, but readers will search his social media timelines in vain. 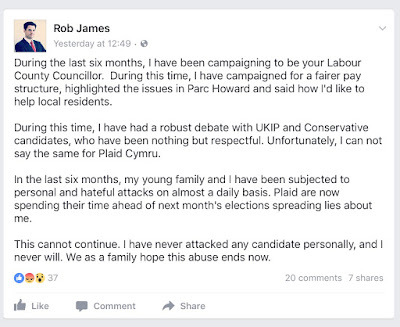 Will the real Rob James please stand up? Someone said to me earlier this week that he wasn't sure if Rob knew who he himself was any longer, such are the twists and turns he has made since the relatively short time we have learned to love him. He arrived on the scene in Bryncoch South with public announcements that he was buying a home in the area. That never happened. He was announced as a man from a once local family, working in the local Tesco Express. That turned out to be a fill-in job, and people who have lived in the area all their lives have difficulty recalling the family. They may have been there but obviously their presence, like the boy himself, was largely invisible. He promised an all singing and dancing website to keep residents up to date. You won't find that since he made it disappear either. Cyneifiwr points out the anomaly with his address. Residents had no idea he had done a flit until it was announced by a local blog. Ask him, as I have, about his attendances in other areas. As a local authority representative on the governing boards of two local schools. Because you'll do better than me if you can get him to go public with the figures.

And these latest developments alleging "hateful attacks" on him and his family over a six month period on an almost daily basis? These, if proven, would be deplorable. But Plod, even those in South Wales, will want to see evidence. Cyneifiwr points it out for all to see. Look at Rob's social media yourselves and where are these daily "hateful attacks"? Has he deleted them? Or have people been harassing him and his family every day in the streets. Something doesn't add up to me. What I do see is a very ambitious man of average talent given the opportunity that can make or break his political career. He has usurped Labour's finest, and been given the task of being their campaign manager to lead them back to power in Carmarthenshire. Do that and the world's his oyster. Fail, and he's a busted flush. He's alleging these attacks have been going on for half a year. Then announces them publicly with just over two weeks left to vote, and just before postal voting is allowed. Plod will take weeks to look into things. A "harassed" Rob and young family will garner the sympathy of any fair minded undecided voter. Complaints will be dismissed by Plod post-election. Job done. Until Rob presents us with the evidence, and there should be lots if what he's said is true, I must remain sceptical. Because we in Neath feel we have seen it all before.

Well done, Cyneifiwr, on an excellent piece about our Rob. The truth needs to be told.

This really is laughable . Labour llanelli have a long history of personal attacks against others so Rob James needs to look at that first . The problem is labour dush the dirt and it is usually just before voting so the other party/independent do not get enough time to correct the lies .

Why does the recent article in Llanelli Online, asking where are Plaid's policies, lead with a photograph of Rob James in a dark suit and red tie, arms folded, looking presidential (smug)? This chap looks lean in the face, not quite chiselled features but getting there. Yet the photos of Mr James I have seen in recent months show a much more portly figure, with cheeks now full, bearing little resemblance to the figure in the Llanelli article. Can Cyneifiwr or his readers confirm if these are both the same chap?

Since taking over the leadership of Carmarthenshire County Council in 2015, Plaid Cymru–The Party of Wales has "restored the council’s reputation" and set the county on the road to a prosperous and secure future.

Are they dreaming or just telling porky-pies ?

I'm glad someone else has picked up on the photo! Dark suit, red tie and folded arms! Not exactly the welcoming councillor look!

If these allegations of Rob James are shown to be total fabrication then the police should give the young man a severe talking to at the very least. There's a democratic process called an election going on. If everyone acted like Mr James the wheels of law enforcement in West Wales would grind to a halt.

With regards to Jeremy Corbin's claims of other Parties being "morally bankrupt ", he obviously remains blissfully unaware of Llanelli Labour it would otherwise be a definite case of Pot &Kettle

Oh robert dear . Cant you see you are useful for the next week or so and then if you dont continue to be a yes puppet your ousted like bowen madge williams etc .