Labour's satnav seems to have developed a strange technical fault. Yesterday it was telling us that the candidate began his campaign in Llandysul; today it says that the campaign began in Drefach Felindre, "an idyllic rural village". An anonymous poster in the comments below would have us believe that it said Drefach Felindre all along, and that to say otherwise is "fake news".

Unfortunately, in his rush to change the location of his launch, the Labour candidate has forgotten to proofread the rest of his brief announcement:

Today was the official launch of the Welsh Labour Campaign in Carmarthen East and Dinefwr. We launched our campaign in Dre-Fach Felindre near Llandysul, an idyllic rural village in the north of the constituency. In my address to Labour Party activists an supporters, I warned of the dangers of another Tory govenrment whih would drive further inequality in our society and further privitise our public services.

Welsh speaking voters wishing to read about the candidate and why they should vote for him will be sadly disappointed. His commitment to the language is limited to telling us that he is a "llais ffres i Sir Gâr".

The rest of Dave Darkin's campaign website tells us about his business and comings and goings in Llanelli, including the fact that he recently became a member of Llanelli Town Council. It forgets to tell us that voters in Llanelli did not think he was up to the job of becoming a county councillor.

Those who voted to make Dave a member of Llanelli Town Council two short weeks ago will be surprised to learn that he appears to have moved to Ammanford since being elected, according to both his own website and that of the Labour Party: 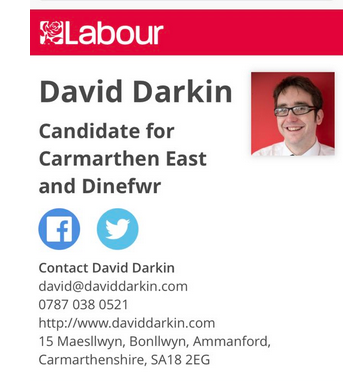 Concerned Llanelli residents may wish to check with the clerk to Llanelli Town Council that Dave still qualifies to sit as a town councillor.

The far north west corner of Carmarthenshire is not exactly fruitful territory for Labour, but then neither is the Amman Valley these days. The whole of the Carmarthen East and Dinefwr constituency returned just two Labour councillors on 4 May in what used to be a sea of red.

Labour has lost its way, and that may explain why the party chose to launch its general election campaign in what it describes as the "idyllic rural village" of Llandysul "in the north of the constituency".

Perhaps someone should give them a map because Llandysul is not actually in the constituency.

This great event is recorded on Dave Darkin's campaign website which contains next to nothing about Carmarthen East and Dinefwr and a great deal about Llanelli and Darkin's work as an architect. It's one way of touting for business.

If Dave's campaign website is to be believed, the Labour candidate, who states on his nomination papers that his home address is in Llanelli, has upped sticks and moved to Ammanford, where he appears to be shacked up with former councillor Anthony Jones:

Having puzzled voters in Ceredigion, the Labour squad headed for Newcastle Emlyn where the Labour vote is only marginally stronger than the Monster Raving Loony Party's. It was cattle market day, and the smell of fresh dung mingled with the heavy scent of slurry the boys had recently sprayed on the fields around the town. The rain poured down relentlessly as the Labour team, a mix of students and Guardian reading avocado munchers fretting about their next Ocado delivery, trudged around the town.

Unfortunately, what with it being a very wet market day and a time when most people under the age of 65 were out at work, most of us missed this very rare Labour outing. The last time anyone can remember seeing a Labour representative was in 2015 when Calum Higgins briefly posed for pics outside the fire station.

Back then Labour announced that Carmarthen East and Dinefwr was one of their top target seats. Calum's campaign sunk without trace, and Plaid increased its majority.

The outlook this time round is even more dire, and that may perhaps explain why, in desperation, Labour headed for Cneifiwr's humble shack.

Cneifiwr was at work, but Mrs C happened to be in. The doorbell rang, and at first she thought it might be those Jehovah's Witnesses again. She looked out and saw a bedraggled group with red rosettes, and decided not to open up.

All went quiet for a few minutes, and then the doorbell rang again. Rashly, she assumed that the Labour campaign had moved on, and went to open the door only to be confronted by the candidate himself and a member of his team who asked a somewhat startled Mrs Cneifiwr to pass on a message to her old man telling him to "stop making people angry".

And with that rather creepy encounter done, the soggy group finally moved on.

Mrs Cneifiwr got off rather lightly, as it happens. Here is an alarmed voter in Llanelli recording her "Labour doorstep" experience:

The question of what Nia has done for Llanelli has been puzzling Cneifiwr as well, and it is something this blog will attempt to answer in the next few days.

What Nia has done is supported or ignored the bully tactics of Llanelli clp members . Why you ask ? Because she is answerable to them . But oh just a minute she is involved in the goods shed . As for David Darkin why do none of the labour councillors declare interests when in planning and his name pops up ?

To be honest don't take what people on the doorstep with any sort of credibility. that works both ways- the person answering and the volunteer canvasser. I've door knocked in the past and had foul language, abuse, out and out racist comments. A Plaid voter once told me he wouldn't vote for Ed Miliband because he was a Jew. I know of one labour canvasser in this campaign who was quite upset by some prejudiced remarks made about Nia when one member of the public revealed the reason he wouldn't be voting for her. You're an ex journalist and should know better than to publish a post with an accusation about a labour canvasser without getting the other side of the story.

Fake news: he launched is campaign in Drefach Felindre. direct from his website- "Today was the official launch of the Welsh Labour Campaign in Carmarthen East and Dinefwr. We launched our campaign in Dre-Fach Felindre near Llandysul, an idyllic rural village in the north of the constituency."

You're obviously still at a stage where they think they might have some effect on you by calling. You must aspire to my status, which has seen me successfully piss off all political parties (and unaffiliated individuals), to the extent that they know what kind of reception they'll get, and so - they leave me alone!

The Jehovah's are convinced they've FOUND God. Welsh Labour are convinced they ARE God. I have always found the former more agreeable visitors, prepared to debate rather than dictate. Buy Mrs C a good solid baseball bat and keep it by the door.

Anon @ 11.39 No it is not fake news. The original post on Darkin's website said the launch was in Llandysul, and he managed to misspell Llandysul. The spelling was then corrected. Then when this blog pointed out that Llandysul is not in the constituency, the post was changed for a second time to Dre-fach Felindre.

Incompetent and liars as well.

Shocking how someone could lie about serving Llanelli town council that he lives in Llanelli yet clearly showing his address as living in Ammanford . But he is labour so shock or surprises there

At least Mostyn didn't call at Casa Cneifiwr! He's too busy making a fool of himself on TV.

Labour would have been safer launching their manifesto in Garnant, that last red bastion in the constituency (although I suppose Bonllwyn is also in the Labour held Pontaman ward). Wandering out to verdant Llangeler is unlikely to win them many votes.

But then again, being a Llanelli boy, perhaps Darkin couldn't find any Amman Valley Laboristas willing to support him for the launch? ¡Hasta la victoria! as they say in Bynea.

Anonymous 10:44
Isn't the point that your party's candidate used a fake address on his own literature? And as for not believing canvassers or householders, it takes a very brave man to accuse someone else's wife of lying to him - and a very obviously Labour one to try not only that smear but two others. Of course, if one does not believe canvassers or voters, it makes me wonder why anyone should believe you.

To quote Uncle Junior in the never to be forgotten final episode of The Sopranos, 'I'm confused'.

If so, what is it with these Labourites, are they constantly on the move or do they simply not know where they live. But then, the local AM, Barry Lee Waters does not provide a good example.

Travelling around Carmarthenshire and Pembrokeshire the Placard war is firmly between the Tories and Plaid. Cardiganshire on the road from Carmarthen to Aberystwyth has a smattering of Plaid placards with one lonely generic Tory placard without name of candidate lying outside Aberystwyth.

He can not live in Ammanford and be on Llanelli town council .