The latest name in the frame is Havard Hughes, another London-based Tory. Hughes grew up in what he vaguely describes as "West Wales", works in PR and was with the LibDems for 17 years before deciding that David Cameron had what it took. If he still has any of his LibDem principles, he must be feeling distinctly uncomfortable in the new-look, strong and stable regime.

If Havard Hughes is to be parachuted in, his career and business interests in London are likely to take priority over any ambition to become an MP in distant Carmarthen East and Dinefwr. Or to put it another way, he will be a paper candidate.

The rumours that Daniel Thomas may stand remain just that, with no confirmation yet as to who has been selected, if anyone.


There are some uncanny links between Carmarthenshire and the London Borough of Barnet. Our much-loved chief executive, Mark James CBE, began his ascent up the greasy pole of local government officialdom in Barnet, and Cneifiwr once lived in digs there. Carmarthenshire and Barnet also share a long history of blogging about council matters.

Rumours swept the internet yesterday that the London borough is about to lend us one of its sons, Cllr Daniel Thomas, to stand in the Conservative and Unionist interest in Carmarthen East and Dinefwr in the general election, the previous Tory candidate, fox bothering barrister and shameless self-promoter Matthew Paul having blotted his copybook with Mrs May's strong and stable party machine.

Dan, or Cllr Daniel Thomas BA (Hons) as he calls himself here, is described as a blue-eyed, blond Thatcherite with a strangely robotic way of speaking and not much going on between his ears. Which may explain why he feels the need to advertise the fact that he is not really thick at all, and managed to get a degree.

On no account should anyone turn to the sensitive subject of receding hairlines when in conversation with Cllr Thomas.

Observers of his career in local politics say that while being very ambitious, young Dan has not always been known for hard work. During a six month stint as cabinet member for the Environment in 2009/10 he failed to hold a single "theme" meeting with senior officers, "theme meetings" being considered very important in this Tory stronghold.

He currently describes himself as a property developer but used to working in the world of banks and building societies. He has now ditched the Ferrari and Porsche for a Smart car.

A Tory source notes that in 2010 Dan Thomas stood in "some god-forsaken South Wales constituency", a reference to Neil Kinnock's former stomping ground in Islwyn. 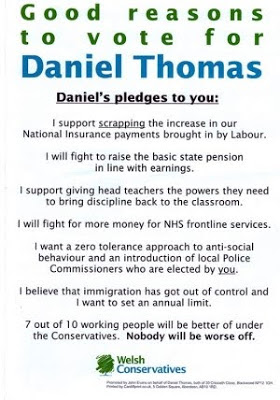 His election leaflet will need more than just a change of constituency name this time round, what with Mrs May being less than keen to promise not to raise National Insurance or keep the "triple lock" on the state pension. The NHS could also be difficult territory, so expect Dan to promise a strong and stable red, white and blue Brexit instead.

Although Dan is still only in his mid-thirties, observers say that he began playing on anti-immigration themes long before that became popular. The threat to the state pension and the fact that English pensioners account for most immigration in this part of Wales may make this a rather tricky card to play.

Carmarthen East and Dinefwr, where memories of the late Blessed Margaret are cherished, is unlikely to prove fertile ground for this champion of Thatcherism, outsourcing to the private sector and generally flogging off public assets and closing down libraries and other services.

But we should never under-estimate the tendency for turkeys to vote for Christmas. The demise of UKIP which has yet to announce whether or not it is fielding a candidate, means that the 4,363 votes cast for the reclusive Norma Woodward in 2015 may be looking for a new home.

Apart from one car-crash appearance at a hustings, Norma never bothered going out to meet voters, and even threatened to sue her party before the campaign ended.

On that sobering thought, Cneifiwr is heading off to work.

Neil Hamilton himself will be standing for UKIP in CE&D. And if you're really lucky you'll get Christine thrown in too!

"Christine thrown in" what?