Having recovered from his, erm, cold and had a shave, Labour's Calum Higgins was out and about on Saturday as part of a Labour campaign called "Cost of Cameron", or for Twitter users, #costofcameron.

Did you notice? No? Well, neither did most people in Carmarthenshire. 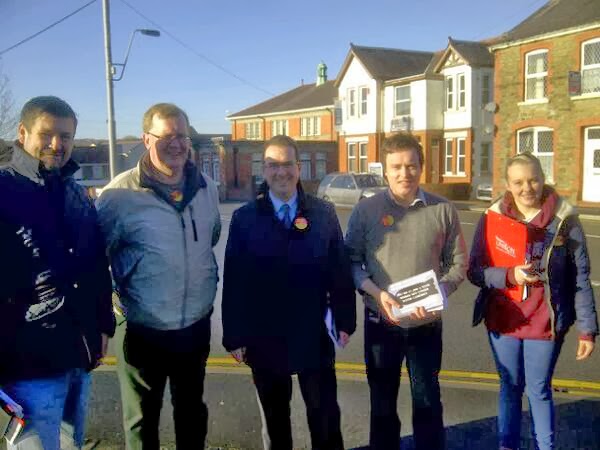 Owen Smith and Mark Fisher ought to have done a little more homework before joining their party colleagues in Carmarthenshire.

The Labour-led council in Carmarthenshire is planning to abolish trade union facilitation time and has regularly gone on the offensive against Mark Fisher's own union. The same council also vetoed proposals to introduce a living wage for council staff.

Of the 8,744 people currently employed by Carmarthenshire County Council (several hundred are likely to lose their jobs this year), 2,876 earn less than the living wage, and 2,583 of those are women (figures provided by the council under a freedom of information request).


Owen Smith also seems to be less than well informed about Carmarthenshire. "700 disabled hit by Bedroom Tax", he tweeted, referring to the number of council tenants affected by this punitive measure.

"More reasons to vote Labour in 2015", replied Mark Fisher, presumably unaware that Kevin Madge and Tegwen Devichand had also vetoed proposals to stop victims of the bedroom tax from being evicted.

Labour's problem in Carmarthenshire is that it has to rely on outside help because of dwindling numbers. It is not clear whether any of Calum's fellow Labour councillors took part in this mini campaign. Perhaps not even Kevin Madge has the neck to campaign in favour of introducing a living wage and protecting victims of the bedroom tax from eviction, while doing the opposite in Carmarthenshire.

In preparation for its day of action, Labour put out contact details on its website (here) under the heading "Wales - Cost of Cameron Day".

One telephone number was available for anyone seeking information in Carmarthen East and Dinefwr or Carmarthen West and South Pembrokeshire: 07872417241.

It turns out that whoever has this number is located somewhere in darkest England. The same number was also used for an "action line" in support of the Labour candidate in the Corby and East Northamptonshire by-election, and it is also given as the number to call if you want to speak to the Great Yarmouth Labour Party.

Calum knows all about bussing in supporters from his own election campaign in 2012. Prominent in his team was Lee Jameson, prospective parliamentary candidate for St Austell and Newquay in Cornwall. Lee does not live in Cornwall either, it seems, but gives an address in West Sussex. At least it's in the same country!

The 2012 campaign in Tycroes was an emotional affair according to Lee's blog. Here he is writing about the count:

"So with all the votes counted and the piles separated we could see we had won, god I have never been so received we did a jig had a big hug and it would not be a true drama if I had not cried. The majority was 65 so my calculation of 150 did not look so bad and if all our promises had turned out that would have been the majority.

"We then headed of down to the pub for lunch a couple of drinks to celebrate. During that lunch the new Councillor Higgins said he could not have done it without me, and that I tell you meant a lot to me he also stated that when I decide to run I will have his full support.

That's local government politics for you.

I wonder if Callum would like to campaign also for all those people he employs forced to take zero hour contracts?
lots of care workers are paid for by the council and have "wages" which are inadequate. These are the majority, employees of private firms who are paid only when they get to their clients, in 10 to 15 minute visits and no pay for driving between jobs with their own car and an allowance of less than 25p per mile.
Are you going to check out the private firms?Something to think about, Callum?

I think there are also quite a few people on the council's payroll in areas such as adult education who are effectively on zero hour contracts, with no travel allowances even though they often have to travel long distances.

It is all very strange that there has been no announcement about this campaign from Unison's Carmarthenshire branch either!

Well Unison in Carmarthenshire are far more sensible and discuss matters on an ongoing and regular basis with Plaid representatives. Unison Carms. don't have much time for Labour........wonder why?

Yes anon 20:52, Unison Carmarthenshire are, as you say, more sensible!! To be fair to Mark Evans, he has given Kevin Madge and his labour cronies umpteen opportunities to discuss matters in CCC. To my knowledge Mr Madge has only made the effort to meet Mr Evans on one occasion. Despicable!!!

Mark Fisher if you are reading this then for the sake of all members of UNISON in Carmarthenshire, you fine tune your communication skills and liaise with your colleagues in the Carmarthenshire branch.

The hypocrisy of Labour councillors campaigning for a living wage when the Labour led council has consistently refused to implement one is well noted within this article and as has been correctly observed by Cneifiwr and several commentators, Unison Carmarthenshire Branch had no knowledge of this event.
This may be in part to do with the fact that we have no Labour party members playing an active role within the branch and possibly because Labour councillors would know that our first question to anyone involved in this campaign would be: Have you signed the living wage petition? Followed shortly thereafter by: Will you fight against all cuts in public services? It is for the questions that we pose to Labour councillors that we do not make ideal compatriots on these PR exercises.
The reality is that in the Labour led Carmarthenshire Council is not only ratifying but also in implementing Con-Dem cuts which will lead to widespread job losses, poorer services and less money being spent in both the public and private sectors. It is not an exaggeration to say that, if left unchallenged, these cuts will bring about the utter devastation of public services and will doom many parts of Carmarthenshire to decline in much the same way as pit closures did to other towns in the 1980’s.
Were Labour councillors willing to stand up for the residents of Carmarthenshire and fight against the cuts in their funding, they would have our unwavering support – These pleas and those of the Carmarthenshire residents who will suffer as a result of these cuts have however fallen on deaf ears.
We have consistently campaigned for councillors to challenge the Welsh assembly and for the Assembly itself to challenge Westminster against austerity cuts – Cuts which have been made “necessary” due to the greed and venality of banks and the profiteering of big business.
It is in the name of big business that we are being told that our services must be cut, it is in the name of bankers that our pension funds have been raided and it is the name of Labour that Con-Dems are making cuts.
Ask yourselves this: Did the elderly whose day centres are under threat of closure cause this financial crisis? Did your local football team whose grounds fees have skyrocketed cause an economic downturn? Did you irresponsibly borrow billions of pounds and then demand public money to bail you out? Our guess is no.
One final question: Did you elect a Labour councillor and give them a mandate to implement cuts? We certainly didn’t.

Oh dear! Neither Calum or Kev will be happy with the post from Unison.

Well done to the Carmarthenshire branch for standing up for their members. It's such a shame other councils are happy to stick by Labour administrations irrespective of the way they treat their workforce.

It's good that we've got a real alternative opposition in the county. The sooner people realise that all Labour party councillors care about is the size of their office and pay packet, the sooner we can get rid of the party altogether and bring democracy back to Carmarthenshire.

Well done to the Carmarthenshire branch for standing up for their members. It's such a shame other councils are happy to stick by Labour administrations irrespective of the way they treat their workforce.

It's good that we've got a real alternative opposition in the county. The sooner people realise that all Labour party councillors care about is the size of their office and pay packet, the sooner we can get rid of the party altogether and bring democracy back to Carmarthenshire.

Where is Mark Fisher when Unison members at Neath & Port Talbot need him? In another county! That says a lot about him doesn't it? As does the article in the link below.

The Unison branch in Carmarthenshire works for its members! Who do you work for Mark Fisher?

It shows how out of touch labour councillors are that they don't even realise that their own council doesn't want to implement a living wage.
I feel sorry for union members in neath. How many people are even further away from a living wage beacuse of mark fisher agreeing to cut 2% of their wages? Why doesnt he spend his time fighting for his members not cozying up to his labour cronies waiting for a scrap to fall from the table.

UNISON should only fund candidates prepared to vote against attacks on our members and on public services. Carmarthenshire branch 100% correct not to take part in this sham. Break with Labour and Fight all cuts!

Unfortunately there is a total inaccuracy in your photo and story. Mark Fisher may have tweeted about the living wage (which incidentally a national UNISON priority). But if you look at the photo - those who know Mark will see he is clearly not there! Nor has he been in the Carmarthen area - when he is clearly committed to working in his own branch. As a member of UNISON I know this to be a FACT! Get it right before you start bumping your gums...!

And who took the photo? I he it on good authority that its mark fisher.
Mark fisher is a labour stoolie who's quick enough to sell his members down the river when it suits his ambitions - that's why his employer gives NPT unison four full time seconded posts.
Compare that to the one full time post that Carmarthenshire have given and are now threatening to take away.
One of these branches has a track record of opposing cuts and the other bends over backwards to please its labour masters. Have a guess which is which.