The recent libel case between Jacqui Thompson and the Chief Executive of Carmarthenshire County Council is continuing to make news as people digest the implications of Mr Justice Tugendhat's verdict.

MP Jonathan Edwards (Plaid) put down an Early Day Motion in the House of Commons (here) to draw attention to the use by Carmarthenshire County Council of public funds to help Mr James bring an action for defamation against Jacqui Thompson, as well as defending an action being brought against him.

The motion also refers to the public interest in knowing how much the case cost the council. Needless to say, the council has no intention whatsoever of disclosing this information, and at least two requests under the Freedom of Information Act have so far been refused. One went to appeal within the council, and naturally the appeal was dismissed as well. Whether the request will now be referred to the Information Commissioner remains to be seen, but that is always a slow process.

In a separate move, Jonathan Edwards wrote what has to be one of the best comment pieces so far on the implications of this case (here), and this and the EDM were picked up by the Western Mail which ran a story here. You will see from that article that there is a clear divergence of opinion between the Welsh Government and the County Council on the use of public money to bring actions for defamation.

The spokesperson for the Government said, "An order was made in 2006 which prohibited local authorities from granting indemnities to members or officers who want to initiate defamation cases".

For its part, the council's view is that it has a "common law power to bring defamation proceedings". A two finger salute to the Government, in other words.

Meanwhile, back in Carmarthen the chief executive has set out his view of the matter in his latest triumphant missive to council staff in Y Gair, the monthly staff newsletter. 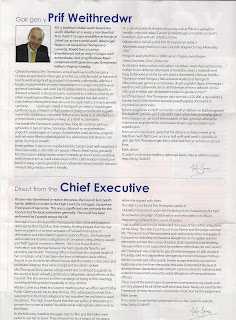 "This was a significant case, not only for the Council, but for local authorities generally. The result has been welcomed by Councils across the UK", he boasts, thereby demonstrating why Jonathan Edwards and so many other people are right to be worried.

The verbal victory parade continues, "The High Court dismissed Mrs Thompson's claims that she had been defamed by the Council, in their entirety".

The spin put by the chief executive on the case is that his counter-claim and defence were selfless acts taken to protect all 9,000 of the council's staff from an unprecedented assault by a middle-aged woman armed with a blog. This assault had been maintained against "numerous officers", he thunders.

Numerous? The court case featured three officers, one of whom had only a brief walk-on part. The other was the head of planning who was the subject of a handful of blogposts out of hundreds, while the third was the chief executive himself, the star of the show (and of Jacqui's blog).

The piece continues for several more paragraphs, outlining the bare bones of the case as it was heard in court along with a summary of the juicier parts of the judge's findings.

Mr James mentions that Jacqui Thompson was ordered to pay damages of £25,000, but does not say that the damages were awarded to him personally. Neither does he hint at what he intends to do with the money. A few weeks ago he told the Carmarthen Journal that any money raised would go to good causes, without specifying what those might be. Now there is just silence.

Somehow, then, the case was not anything to do with him; he was merely defending the council when he counter-sued Jacqui Thompson..

If we accept that, the counter-claim was in essence the council suing a private citizen. Mr James just happened to be the proxy.

That would perhaps explain why Mr James made such liberal use of council resources as he fought the case (the funds, the cars, the first class rail travel and the presence in court of the council's Head of Law, the head of the press office and other council staff).

It is also consistent with attacks Mr James and the press office have made on council critics over the years, who are described variously as "small, unrepresentative groups" with an agenda and people who "have a problem with local government".

Thus, criticism of the chief executive becomes an attack on local government.

At the very end of the piece Mr James pops up in first person for the first time, only to say once again (with an obvious dislike of commas) that it was all for the sake of others:

This is one of the worst cases I have ever come across in my career and I am very pleased for all of the staff who have been falsely accused by Mrs Thompson as they have been completely vindicated by this judgement.

A reform of the law of defamation is currently wending its way through Parliament, and there are growing calls for changes in the law to prevent local authorities from following in Carmarthenshire's footsteps. But there are plenty more legal ways of silencing critics open to councils and other government bodies.

One noticeable feature of the article is the importance Mr James attaches to the Protection from Harassment Act 1997.

This was a piece of legislation passed in the dying days of John Major's dire administration and was intended to deal with stalking. A victim of stalking, Mrs Evonne von Heussen, played a prominent part in getting the bill onto the statute books.

In the years since the introduction of the Act, however, it has morphed into something rather less admirable. If ordinary people can be stalked and harassed, so too can companies or even councils, the legal fraternity has decided, helped along by more illiberal amendments in the Blair years.

In the most infamous attempted use of the Act so far, the British Airports Authority applied in 1997 for an injunction under the Act to ban groups including members of the National Trust, the Royal Society for the Protection of Birds and the Woodland Trust from Heathrow, the surrounding area and even routes to the airport such as the Piccadilly Line. Unsurprisingly, the injunction was not granted as it would have criminalised an estimated 5 million people.

The Act has been used more successfully on other occasions to deal with people protesting against militarism and climate change.

Companies and other bodies which claim that someone may feel "alarmed or distressed" by the actions of protesters or others (Mr James appears to think that bloggers may fit the bill as well), can apply for an injunction. If the injunction is then breached, a criminal act has been committed which can mean imprisonment for up to five years.

Harassment is defined merely as something which causes alarm or distress, and harassment may take the form of words only. Harassment is deemed to have taken place if something is done or said twice. Two blogposts mentioning the chief executive could be enough, in other words.

No wonder Mr James was so pleased with Mr Tugendhat's verdict and the potential it provides to protect councils from the alarm and distress they may feel whenever they are criticised.

More background on the Protection from Harassment Act is available from The Guardian here and Liberty here.

who took the case against Mark James ?

I remember reading recently how one council was complaining about the sheer number of FOI requests it has to deal with.

Why don't we bury CCC in FOI requests? The more trivial the better!

What a shameful statement from Mark James. He was only too happy for his staff to slander and defame me. Unfortunately I did not have taxpayers money to grub into to sue him and his staff for the most disgraceful outbursts when I was only telling them the truth. A truth they did not wish to listen to nor did they wish to deal with. The hurt and damage he and his staff have caused to me no amount of money could put right. So many faces!

Someone made a comment that "The law is never a level playing field." I agree and the judge in Jaqui's case failed to take into consideration evidence from her witnesses that this was not a campaign solely against the chief executive.It was also the council as a whole.He therefore was making an opinion which was denied to Jaqui's witnesses.

@ anon 21:13 ... who used personal finance to fund the case and who used the TAXPAYERS money to counter claim?

Will HMRC be treating the 25K as an asset by reason of employment?

Mark James should be keeping a very low profile on his hollow and undeserved victory in the High Court, not be delighting in it. This was a man who did not use his own money unlike Ms. Thompson; who took no risk, as to lose would still not have cost him a penny, unlike Ms. Thompson who could now stand to lose everything. Hardly something Mark James should be proud of. To use your own money is a whole different ball game Mr. James. As a christian, and someone who has publicly declared he wishes the damages of £25.000 to be given to a good cause, I have a suggestion. Waive the damages and it may go some way to regaining a smattering of respect.

Anonymous @ 8.24 - my feelings exactly. And I've heard many other people in Carmarthen voice similar sentiments.

Proverbs 28:22
A stingy man is eager to get rich and is unaware that poverty awaits him.

Mr James seems totally oblivious to the criticism, of himself and the rest of the council, that has been reported by many others.He seems to be fixated on the libel trial.Of course,if he keeps referring to it, it deflects attention from more important issues to be discussed.

Pity Carmarthenshire County Council didn't offer me the same protection as an employee when I was bullied, belittled, humiliated etc. and all because I blew the whistle on abuse. I was also isolated and some staff told me they were told not to speak to me, and others said they were told to watch what they said to me. I was also stopped from having lunch with service users and staff weeks after attending Officer B's flawed disciplinary as a witness.
I had been having lunch with service users and staff for 12 years previous to that. Their policies offered me no protection.

How shocking is that!There is something sinister at work in Carmarthen.Is there no one able to deal with what has obviously become a situation devoid of integrity.

There is no moral compass in Carms council. They've looked apparently but can't find it.

It's scandalous, but what hope have you got when the investigating officer, who admitted to me in correspondence, dated the 21st June 2007, that it was his decision not to include all the allegations of abuse of a vulnerable person, by a manager, in her disciplinary, and then he is promoted to head of service, on an interim basis in 2008 and then permanently in July 2009.

Something's going to blow soon! I can feel it in my bones!

Can anyone please confirm that the rumours circulating of structural changes are true?