Someone has obviously had words with Mr Thomas, the obstreperous neighbour of Trisha Breckman and her partner Eddie, following publication of pictures on this blog of the gigantic lorry trailer (or agricultural shelter in the view of the County Council's planning department) which has been parked alongside the cottage since the beginning of March.

The logo of Owens Road Services which sold the trailer to Mr Thomas has been partially obliterated with red paint: 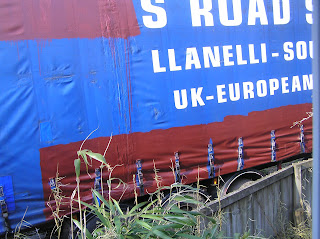 Unfortunately for Mr Thomas, the Owens logo is already seeping through, and the Welsh climate will no doubt help to restore this gigantic advertising billboard to its pristine glory before long: 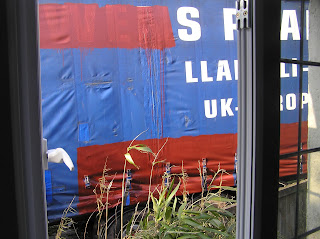 In other news, the Guardian reports that Mike Harris, head of advocacy at Index on Censorship and vice chair of Lewisham Council, submitted a Freedom of Information request to Carmarthenshire County Council asking how much County Hall had spent on the chief executive's recent libel action. The request was refused.

The council's Freedom of Information section (which forms part of the chief executive's department) has clearly been busy recently. Another request asked for a breakdown of advertising receipts for one of the recent editions of Carmarthenshire News, the council's free hamster bedding service. According to the council, advertising revenue averages £18,000 per edition, but it was only able to supply copies of four invoices totalling £1,680. Two of the advertisements in question were placed by the St Catherine's Walk shopping centre and the Scarlets.


Bearing in mind that the County Council was recently unable to say when precisely the chief executive paid himself a £20,000 advance on his returning officer fees last year, and provided differing figures for the amount paid, the rather embarrassing discrepancy between claimed and actual advertising receipts for Carmarthenshire News raises the question of why Mr Justice Tugendhat was inclined to believe the council when it said that it had not paid the legal bills of its Head of Planning when he sued blogger Jacqui Thompson several years ago.

For those who haven't followed the libel case closely, a great deal of attention was paid in the most recent libel case to a mysterious document relating to the Bowen v Thompson case which carried the stamp of two separate council departments, one of which was Resources, the name given to the bit of the council which handles all the dosh and pays the bills.

The council was unable to explain how this document came to be in its possession, but was nevertheless confident that it had not paid Mr Bowen's court fees.

Assuming that the County Council does eventually come up with a convincing explanation for the missing advertising revenue, the beleagured local press will be looking on in despair as the council's propaganda rag continues to drain away much needed advertising receipts.

Thanks to Robert Lloyd's Sir Gar Blog for drawing attention to the latest sales figures for the local and regional press. In the six months to the end of 2012 the Carmarthen Journal saw a further 12.3% drop, while the Llanelli Star and South Wales Guardian reported declines of 6.3% and 6.9% respectively.
Posted by Cneifiwr at 08:38

Shouldn't Inspector Knacker be applying his beady eye to the bank accounts of the planning officer to verify that he personally paid the costs/fees?

There are so many unanswered questions of Carmarthen council and it seems the councillors are helpless in trying to carry out the democratic process for which they were elected.Who is really in charge councillors or officer.

The blue lorry parked so closely to Trisha Breckman and Eddie Roberts property is clearly meant to stay.If anyone has seen the size of the neighbour's sheds obtained for agricultural purposes it is crystal clear why the lorry has been placed in this position.Of course something can be done about it what about harassment intimidation - in other words bullying.

The reason why the judge believed that the legal bills hasn't been paid by ccc is that the lawyers themselves told the judge that they had recoeved payment from a private insurer. It's no that difficult to see that the lawyers would be paid either way and had no reason to lie in court, if foun out they would be struck off. If followed this blog since the beginning and as a loyal reader, I hope you don't tag yourself too strongly to the other blog that has been proven to be a little liberal with the facts

I represent Owens (Road services) Ltd of Llanelli, and I write following the poor publicity our Company has received as a result of the trailer parked in a field outside someones property. this trailer was sold at auction over a year ago, and all buyers of equipment sold at the auction (handled by a nationwide auction Company, not by Owens directly)are informed that the Owens name must be removed from their purchases. I did, however, make the effort following your publication to track down and contact the new owner of this trailer, and informed him of our displeasure of this incident. I was assured that Our name would be removed. I would appreciate that it be known that Owens (Road Services) Ltd are a professional and well respected haulier that does not condone the use of our equipment in such a fashion.

Thank you Rick. All the comments I have received about your company have been positive, and I fully understand your dismay at seeing something like this.