Llangennech: "He laughed at me"

There was yet another inflammatory “contribution” by UKIP leader, Neil Hamilton AM (UKIP, Mid & West Wales), on the Llangennech school row. He accused Plaid Cymru of setting loose “internet trolls” to launch character assassinations, and Jonathan Edwards MP (Plaid, Carms. E. & Dinefwr) of a personal campaign of intimidation targeting an individual protesting against the changes. There's now a case to stop proceedings  and (re)launch an “independent” public consultation.

Rhun ap Iowerth AM was quick to point out that Jonathan Edwards had never named an individual protester or led a "personal campaign of intimidation". What he had done was to write to Jeremy Corbyn drawing his attention to the activities of some Labour Party members and activists in Llanelli and Llangennech, their collusion with UKIP and other extremists, and what he termed the "nasty, divisive campaign" being orchestrated by the Llanelli Labour Party.

Jonathan Edwards' letter (here) was immediately followed by an announcement from the Labour Party that it was suspending a member pending an investigation, and it named her as Michaela Beddows.

Beddows was the public face of a campaign which has run for two years. It was characterised by its increasingly shrill and aggressive tone which left many ordinary parents, school staff, governors and others feeling intimidated. There were personal attacks on a number of individuals who disagreed with the group.

For nearly all of those two years, the campaign had the field to itself. Beddows and others made extensive use of social media and was given an unquestioning, uncritical platform by the local press (the Herald was the only newspaper to express reservations) and the BBC. Last week's false reports in the Western Mail, Llanelli Star, South Wales Evening Post and Carmarthen Journal were just the latest examples of just how one-sided media coverage has been.

This blog reported on the campaign a couple of times and began to suspect the involvement of extreme elements from outside the village, but it was only when firm evidence emerged of the depths to which the group had sunk and their collaboration with UKIP and radical right-wing elements that the floodgates opened.

That the Labour Party in Llanelli was very intimately involved with the group and was aware of its activities is beyond doubt, and the behaviour of some Labour councillors, such as Kim Thomas (Llannon), deeply shocked many ordinary people.

What has happened over the last two weeks was not directed by Plaid Cymru (this blog does not take orders from anyone), but was the genuine expression of people from Llangennech and across Carmarthenshire who had finally had enough.

In recent days one more story has emerged, unreported by the local press at the time, of the tactics employed by the Beddows group.

What alerted Cneifiwr were some comments on Twitter about a mysterious incident which caused Labour's Gary Jones (aka Poumista) to become very twitchy and warn a local man to "be careful what you post" as the matter had been reported to the police. It was not a threat, just a warning, he added.

A great deal was going on at the time (last week), so Cneifiwr decided to file the comments away for another day. All there was to go on was that the incident took place at a meeting of Llangennech Community Council, and that both the police and the Ombudsman for Public Services had become involved.

It turns out that the comments related to a meeting of Llangennech Community Council held on 12 September 2016, which had on its agenda the proposal to establish a Welsh-medium school in the village.

In the event, the council voted 9 to 1 in favour of the proposal.

According to reports, there were some half a dozen rowdy protesters in attendance from the so-called "dual stream group", and they called for the Plaid Cymru councillors to stand down, saying they had been on the council "for too long". Oddly, they did not call for the early retirement of any Labour councillors even though one of them has been a member for far longer than anyone else.

Not long after the meeting, one of the protesters -  Michaela Beddows, again - sent complaints about two Plaid councillors to the Ombudsman, claiming that one had pushed her, and another had laughed at her.

It seems that the police were also called in, but quickly dropped their investigation.

On 8 October, the Ombudsman wrote to the two councillors telling them that he was dismissing the complaints against them unconditionally, and he enclosed a copy of a rather scathing letter to Ms Beddows.

Gary Jones, who normally does not hesitate to contact this blog, even in the middle of the night, chose for some strange reason to contact Jac o' the North instead, asking him to tell Cneifiwr that he did not want the incident dredged up again - even though he had just brought it up on Twitter.

Gary went on to suggest to Jac that the school row had boosted Labour membership in the village. The new members included Michaela Beddows and a number of the other members of the school campaign group which, with the active support of the local Labour Party, used the sort of tactics normally associated with the extreme right. 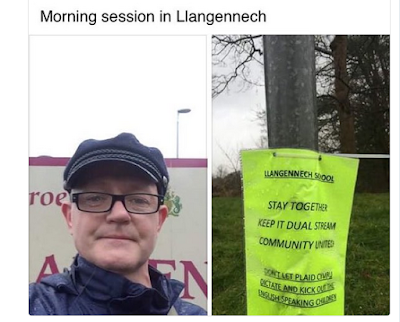 If Gary would like to get in touch to put his side of the story, he is most welcome.

It's clear that we are dealing with some very ugly people in Llangennech. A gang of bullies. Gary Jones has been riding a tiger, and like all who choose that mode of transport is now finding it rather difficult, dangerous even, to dismount.

In an effort to diffuse the situation with regards the incident at the community council meeting, and out of respect to the Councillor involved I tried to warn people not to dredge it up again. I am willing to be contacted , remember I work shifts.

It's not only Llangenech unfortunately it's in Dafen Llwynhendy Bynea and Glanymor/Tyshia . The sooner these so called people are shown the doir the better .In my opinion they are all very nasty dangerous people who have no life outside politics and aim for power irrespective of who they trample on the way up . But it's a big fall too coming down .

That poster with Gary saying English speaking kids would be thrown out was put up in the spring last year- just before the Assembly election in 2016 Is it legal to put about lies just before an election?

I think that what has befallen the Labour Party is very sad. I am old enough to remember some of the great names of the past in the Labour Party from Carmarthenshire...Jim Griffiths, Elwyn Jones and many decent hard-working Labour Councillors who did their best for Wales and their local communities. The state of the Labour Party in Carmarthenshire, particularly in Llanelli is a source of despair to me. They are an absolute disgrace...to Llanelli, to Wales and to the Labour Party. If I still had any say in the Labour Party I would de-select the lot of them..Mrs Devichand and her daughter, Keri Thomas (!),Kim " Apartheid" Thomas, Jeff Edmunds etc etc. The only decent councillors they have are Pat Jones and Bill Thomas..neither of whom are standing in May. Fighting with each other, supporting UKIP and collecting £13,000 a year for doing nothing!

To Anonymous 20.40
Don't want to add to your problems but you are being offered one of NPT's finest in Lliedi come May. To be honest I don't think the problems you have are unique to Carmarthenshire though you do have some amazing characters and tales to tell in your patch. Just look at the situation in Cardiff and Bridgend with resignations, infighting and deselections. Huge scale deselections in NPT. And with the news about the money wasted in Caerphilly while the case of those 3 senior staff members remains unresolved, this will surely mean a right drubbing for them at the ballot box in May. They are clearly in dire straits everywhere.