Whatever the outcome of the elections, Carmarthenshire County Council will look and feel very different after May. Among those standing down are Meryl Gravell (Trimsaran), Pam Palmer (Abergwili) and Ivor Jackson (Llandovery) for the Independents; Terry Davies (Gorslas), Pat Jones (Burry Port) and Keri Thomas (Tyisha) for Labour; and Dafydd Thomas (Cilycwm) for Plaid.

We are likely to see several more booted out by an ungrateful electorate, while others who are well past their best-before dates will somehow cling on.

In common with councils across the country, particularly those serving largely rural areas, Carmarthenshire Council is dominated by the 65+ generation. Some of those standing in May will be 80+ if they serve the full term.

The combination of rigidly sticking to day-time meetings on working days to suit elderly members who are reluctant to venture out on winter nights, and the meagre allowance of £13,000 a year mean that becoming a councillor is not an option for most people of working age, unless they are self-employed or have understanding employers.

So while we may see a few new younger members returned in May, it is sad to report that two of the youngest councillors, Calum Higgins (Lab., Tycroes) and Ryan Thomas (Lab, Kidwelly) are both standing down to pursue careers in Cardiff.


Their departure illustrates one of the biggest problems facing us in the west, which is the loss of so many young people due to the lack of decent employment opportunities and affordable housing.

This blog has given both Calum and Ryan a fair amount of stick in the past, but while Ryan Thomas has been a councillor for only a short while, Calum Higgins has contributed much more. It was significant that Labour's youngest councillors rebelled against the cynical and antediluvian attitudes displayed by the dinosaurs in the Labour group, and voted in favour of bilingual Welsh-medium education in Llangennech.

How depressing, not just for Labour voters, that the party should be losing people like Calum and Ryan while the likes of Tegwen Devichand maintain their gnarled grip on the sclerotic movement.

For reasons which elude Cneifiwr, Calum and Ryan had something of a following among the otherwise sensible menopausal matrons who make up the Take That! fan base, but in an entirely different league is Plaid's Dr Rhys Thomas who will be standing in Manordeilo and Salem, currently held by Cllr Joseph Davies (Ind.). It is fair to say that Cllr Davies has kept a very low profile - low to the point of invisibility.

Rhys is a consultant anaesthetist, flying doctor, a former colonel in the Parachute Regiment who served in Afghanistan and many other places, and an Ironman triathlon competitor. He lives near Salem. 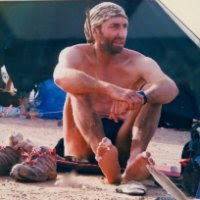 Since leaving the army, Rhys has been instrumental in reshaping the Air Ambulance Service, drawing on his experience of treating casualties in remote areas of Afghanistan. Here is a Guardian piece which explains Rhys's role in developing a service which is a lifeline for rural Wales, and there is another in-depth piece written by Rhys Thomas himself in the December 2015 issue of Cambria Magazine. 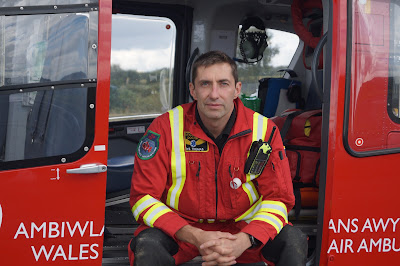 On the other side of the county, and at the other end of the quality spectrum, is Labour's Rob James, who has elbowed aside Bill Thomas, arguably Labour's best councillor.

As readers will recall, Rob is currently a serving councillor in Neath, although given his very poor attendance record, serving is perhaps not the right word.

When he first blew into Llanelli, the spin was that here was a bright, talented, young and ambitious new string to Llanelli Labour's bow. He had friends in high places and was set to go far in the Labour Party. Definitely MP material.

A few months later, and just about the only thing that everyone can agree on is that he is very ambitious. Llanelli Labour appears to be falling out of love with Rob.

Here is the view from inside Labour.

Rob James is a right can of worms. Extremely ambitious and playing games all the time to try to get where he wants. Always running with the 'Hare and the Hounds'. Definitely centre of left to the more moderate members and on the other hand an extreme Corbynista..... the only person grooming Rob is Rob himself. The more astute members saw through him a long time ago and even Tegwen and Co seem to have now. He seems to cut quite a lonely figure these days and there is no evidence of him being 'sponsored' by Cardiff. He moved here because his wife to be lives here and this is to be his home for some years to come. His 'coup' on Bill Thomas for the Lliedi County seat was silent and deadly using members that don't usually turn up and probably Corbynista who thought they would get someone of their 'ilk' on the Council. Very poor show. Bill has doggedly served that ward. Apparently the other Bill Thomas (Rural for Swiss Valley) who is Chair of the Ward was supposed to have given Bill a reference to go straight through to the selection, but says he didn't get the email.  Rob is very much style over substance - not much under the surface.

If that were not enough, it is becoming increasingly clear that Rob is something of a loose cannon. He was publicly reprimanded by a fellow Labour candidate a few weeks back for saying in an interview with the Herald that the council chief executive should be suspended and investigated. While most people in Carmarthenshire would agree happily see Mark James run out of the county, Rob's fellow party member had to point out that mouthing off in the press like that could easily backfire and give the chief executive a very useful legal stick with which to beat huge amounts of compensation out of the council.

More recently, for reasons best known to himself, Rob took to another social media platform to suggest that another NPT councillor, a widow, had been getting very "cosy" with a councillor from distant Aberystwyth. Nudge, nudge, wink, wink. The poor lady was not best pleased.

And then a couple of weeks ago he put in an appearance at Neath Port Talbot's annual budget bash. He was the only councillor to get up to speak, and to shouts of "sit down!" from fellow Labour councillors, he launched into a paean of praise for the Labour-run council which had, he said, kept the salary multiplier between the chief executive and the hoi polloi much lower than is the case in Carmarthenshire.

If Rob had done his homework more thoroughly, he would have discovered that Labour was running Carmarthenshire along with the Independents during the period when Mark James's pay packet was pumped up to its current grossly inflated levels, and that it was the Labour-Independent coalition which approved the unlawful pension contributions opt out, with Labour leader Kevin Madge bringing in a top London QC at great expense to defend the scheme.

Knit your own yoghurt

But this council election is not all about Plaid and Labour. Other parties are also available. If you cannot stomach the thought of Ayatollah Aubel and his Tories, how about the LibDems?

Carmarthenshire's LibDems more or less became extinct after their last elected councillor, Ken Rees, defected to UKIP (this is Carmarthenshire, after all), but news reaches Cneifiwr of a rather select buffet at Dryslwyn to launch the party's election campaign.


A grand total of four LibDem candidates will be standing in the more genteel bits of Carmarthen East and Dinefwr constituency, and you can join them on 23 March for a sumptuous feast of falafal filled pitta pockets at an informal supper. Ample parking for the Volvo. Beards and sandals frowned upon.

With Welsh agriculture facing annihilation thanks to Brexit, the English-only invitation is entirely free of any Welsh lamb or beef, or indeed anything else that suggests meat.

Bill Thomas is an honest, decent man who has served both his ward and this County with dignity and tenacity. His 'young pretender' breezed into his ward without the voters, who have repeatedly turned up on polling day to tick Bills box on election day, even being aware of this dastardly coup.
With a whole County to choose from, full of Councillors, some of whom haven't twitched in the past four years, let alone raise their hand to ask a question, I have to ask, why target Lliedi ward? Perhaps its the new political Klondike! Who put him up to it? It certainly won't upset Mark and his mob to see Bill Thomas being ousted, before he asks some more very awkward questions in the Audit committee.
Llaneli labour need to bow their heads in shame. The one guy they had with backbone and decency, booted out by a carpetbagger.

The Lib Dem candidate popped up our lane a few weeks ago to canvass. She stopped her car and spoke to my partner who happened to be standing in the gateway, and on indicating Y Ddraig Goch flying overhead said 'I take it you're voting Plaid Cymru' and jumped back in the car. In her book it seems that only Plaid Cymru supporters are proud of Cymru and willing to fly the flag. It's just as well it wasn't me she talked to or she would have got a very robust response about the danger of jumping to conclusions. She didn't bother speaking to our next door neighbour who was a bit out out as they are Lib Dems - or were.

Most of the genteel Lib Dems are virtually new to their areas , never served on Town or Community Councils . Apparently LIB DEM HQ feel that a presence has to be seen in County Council Elections , a bit like in 2012 TORY HQ said the same thing . Thats a bit of a coincidence - no its not they were in Coalition . As for Labour moving in Momentum Lab into Llanelli - a party in Llanelli that has lost its way, full of in fighting and double dealing , no wonder old style Labour Party members are stepping down or have been deselected ,not liking the tactics being employed

I see you have the same problem as NPT with regard to the preponderance of aged councillors. In NPT last year the make up was this out of 64 councillors:

Our percentage over 75 was similar to that in that other geriatric debating place, the House of Lords.

But this is serious stuff because councillors should broadly be representative of the community they represent in age, sex, religion etc in an ideal world. And with advancing age it's a fact that generally we become less sharp with our mental faculties. I say generally because in fairness some of the younger councillors we have in NPT would give the octogenerians a run for their money in terms of apparent dementia on occasions. Indeed it has been suggested that some of them even have difficulty remembering when to attend council meetings.

The latest on the LIB DEM Menu
Lib Dem president Sal Brinton will be visiting Carmarthenshire to support the campaigns of our 6 intrepid candidates. Please join us for an informal afternoon tea at the Castel Hotel in Llandovery. High tea at the Castle is a real treat. £10 for the full spread, £2.50 for tea of coffee.

We need to have at least 10 bookings for the high tea, so please let us know if you are joining in, by accepting the event invitation.

Looking forward to seeing Carms Lib Dems out in full force. This is a real thumbs up for our nascent group.