Only the other day Oggy Bloggy Ogwr was having a bit of a moan:

As an aside, however glorious it is to see Labour eat itself in Llanelli, reputations take a hit and Carmarthenshire live up to the title "Wild West", this whole thing is starting to get a bit boring now. Just what is it about Carmarthenshire?

Perhaps it's something in the water; perhaps nothing interesting ever happens in Bridgend. Who knows? But Cneifiwr is confident that whatever the outcome, Carmarthenshire will once again put on a spectacular display of electoral fireworks this year.

We have already had several complaints to the police (at least that's what Jeff Edmunds and Tegwen Devichand claim); the quinquennial ritual of complaints about Cllr Siân Caiach by chief executive Mark James (also the county's returning officer - no conflict of interest there then!) to the Ombudsman for Public Services; more complaints to the police from Mr James against blogger and community councillor Caebrwyn; a mysterious caravan fire near Pontyberem; and now a letter from the Ombudsman to Cllr Sharen Davies (Lab) following complaints about her conduct in a council meeting.

In another sure sign that an election is in the offing, Llanelli Labour's very own human megaphone, Rosemary Emery, is cranking up her social media accounts for a spring offensive.

And nominations for all those wishing to stand in this year's council elections on 4 May don't actually open until 22 March.

Five years ago, Cneifiwr celebrated the council elections with a bus tour around some of the more interesting wards. The bus has been standing in as a chicken coop ever since, but after a lot of frantic hammering, quantities of baler twine and a few gallons of red diesel, the old beast is ready to hit the road again.

In recognition of the success of the big red Brexit bus which had £350 million a week painted on its sides, Cneifiwr's bus has £5.41 daubed in red paint along its bodywork. This is the sum which Google would pay if this blog agreed to carry adverts tailored to Cneifiwr's readers. Surgical stockings, Viagra, electric chairs (not of the mobility kind) and back numbers of Y Cyfansoddiadau most likely. 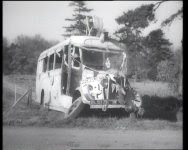 Let's start in Carmarthen South where young Charlie Evans is hoping to unseat Cllr Alun Lenny for the Tories.

Charlie tells us, or at least he did until he locked his Twitter account, that he is passionate about Theresa May, Jesus, education and something called Conservative Friends of the Commonwealth beneath a picture of a union jack flying at half-mast from a lamp post in what looks like the Devon Riviera.

Update 12 March: After what seems to have been a heavy duty spring clean, Charlie has now reopened his Twitter account. Lots of very intense religion in place of his recent political discussions.

He says he is currently campaigning vigorously in Carmarthen, and was boasting about his "snazzy" literature and calling card. When it was gently pointed out to him that his literature was in English only, Charlie came over all defensive.

Nobody had complained, he tweeted. People were far more interested to talk to him about public services. That would presumably be the public services that Theresa May is busily running into the ground in a Christian, caring sort of way.

Anyway, Cneifiwr decided that if nobody had complained, he would - as a voter.

Charlie was having none of it, and promptly had a go at Welsh medium education.

Charlie's "passion for education" clearly does not extend to understanding how the education system works in a part of the world where he thinks he is qualified to become a county councillor. If his claim were true, he would be running into young monoglot Welsh speakers all over Carmarthen.

Before anyone could ask him where these "hundreds of kids" are who have been uprooted, he stomped off and locked himself into his Twitter bedroom, leaving Uncle Simon Hart to tell a cruel world off for mocking his boy. Charlie used to work for Uncle Simon.

Simon Hart decided the best form of defence was attack, and so he rounded on Charlie's critics, claiming they were mocking him for learning Welsh. That was not true, of course, but a couple of inquisitive souls wondered how Simon's own efforts at learning the language were coming along.

The MP for Carmarthen West and South Pembrokeshire regularly heads up the rankings of highest expense claimaints among Welsh MPs, and his claims are nothing if not thorough. In the 12 months to May 2016, for example, his claims included £1.34 for a biro and several hundred pounds for Welsh lessons from a modest total of £62,049.02:

And here are some more:

With hundreds more items to plough through, Cneifiwr gave up at that point, but anyone wanting to dig deeper can do so here.

This is of course an excellent investment, but it is only fair to point out to Simon as a Tory who is keen to slash public expenditure that he could have signed up for an intensive Welsh course in his own constituency. Pembrokeshire County Council will get him on the road to fluency for just £100 for 180 hours of study over a year. Cneifiwr has heard that the tuition is first class.

Campaigning in the digital age


Voters hoping to have a word with Charlie will now just have to wait until he comes knocking because he has locked them all out of his Twitter account, and the website he advertises on his Twitter page is defunct.

Perhaps this is for the best because Charlie's previous forays into social media have sometimes attracted unwanted attention, and for one so young he has already clocked up quite an interesting political CV.

During the 2015 general election campaign, someone had the bright idea of launching "Milifandom". 15,000 Twitter users signed up to say that they fancied Ed Miliband.

Not to be outdone, someone claiming to be a 13 year old girl called Emily launched the "Cameronettes" in appreciation of sex god David Cameron. Inexplicably, Emily attracted only 150 followers.

The Cameronettes attracted a lot of media attention, and Emily complained that she had been subjected to online bullying. She also rejected requests from the press to identify herself, and it was left to the Daily Mirror to announce that Emily was in fact an Exeter University student called Charlie Evans.

Charlie initially denied that he was Emily, before coming out to the Daily Telegraph.

Six months later Charlie/Emily fell dramatically out of love with David Cameron when he announced that he felt "sick to be a Tory" after George Osborne announced plans to cut tax credits. Shortly after that Charlie told Huffington Post that he had decided to leave the Conservative Party because all that "one nation" and green stuff was a sham.

What caused Charlie to fall back in love with the Tories is not clear, but it would seem to have something to do with Brexit and cuddly, caring Theresa May. At any rate, Charlie can now once again indulge his "one nation" passions as an enthusiastic member of Bring back the Empire Conservative Friends of the Commonwealth, whose patron is that caring one nation Tory and former Secretary of State for Wales John Redwood.

Unless Cllr Alun Lenny is unmasked as 13 year old Llinos Wyn, founder of the Dole-ettes, he probably does not have too much to worry about in Carmarthen South.

A wailing and a gnashing

Leaving Carmarthen we now head to Trelech, where quietly competent Cllr Jean Lewis (Plaid) can be pretty confident of being returned in May.

For reasons known only to himself, Dr Aubel seems to do his political campaigning well away from Trelech, preferring to terrorise the residents of Ceredigion instead, perhaps hoping that his flock won't notice. He is also an almost permanent feature on Pawb a'i Farn, S4C's answer to Question Time. There he can be seen shouting down anyone who disagrees with him, either as a panel member or a member of the audience, as he roars his support for the use of nuclear weapons, raves against refugees and immigrants and generally bangs the Tory drum.

His Sunday sermons are probably not for the faint-hearted.

One of Dave Allen's best jokes involved the late Dr Ian Paisley delivering a hell and damnation tirade in Belfast.

"Please, Dr Paisley, what shall I do? I don't have me own teeth any more", calls out an elderly biddy from the congregation.

"TEETH WILL BE PROVIDED!" roars the good doctor.

It is fair to say that Dr Aubel has more than his fair share of bees in his bonnet. There's the evil EU, socialists, nationalists and the BBC to start with. Then there are the Muslim hordes and tidal waves of refugees.

A good idea of the sort of thing which bothers Dr Aubel can be gleaned from his Twitter feed, where it turns out that he is an avid reader of the Daily Express. Among his current pleasures is reveling in the apparent demise of UKIP, and there for once he is right. Who needs UKIP when Dr Aubel is busy out kippering anything that Farage's barmy army can come up with?

Here's one recent piece of fan mail warning of the sort of thing which is now an everyday sight in Trelech: 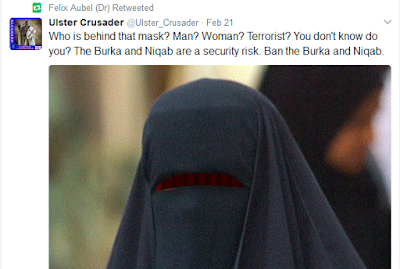 As far as we know, Dr Aubel won't be standing in Trelech in May, but perhaps Ceredigion will be more fortunate.

Thanks for the mention Cyneifiwr. :) You may have breached your friend's Jac's 'copyright'. That is his description of me normally. I do find it far more palatable coming from you though. I think you will find both Plaid and Labour have been campaigning for months. You may want to have a look around a bit more. I will follow you to make it easier. Not much from the Independents or UKIP, though.
Peace and Love.

Always good to hear from you, Rosemary.

Wonderful stuff, Cyneifiwr! Round these parts (NPT) there's no election bus. They just parade a donkey with a red rosette through the streets and that's always done the trick. We have noticed the closure or locking of social media here too as the election looms and focus comes on what our politicos are up to. They are being shut down more quickly than our Labour councillors can get to a free bar. Couldn't help noticing that Simon Hart is one of those 25% of politicians that employ a relative. I take it that Abigail is his wife. Her salary has shot up over the years to now being within the range £25K to £30K but possibly because she now works full time? I hope you get right around the constituency in due course. There are many around here looking forward to your coverage of the Llanelli area particularly.

Poor Carmarthen South Ward, statistically the most christian ward in Carmarthenshire and therefore prone to all sorts of religious lunatics. They should be more careful what they put on the census form!

How can we be sure that's not Dr Felix 'Beaver' Aubel under the burka playing the agent provacateur?

Felix has been misbehaving again (Daily Post/ Golwg/ BBC Cymru Fyw) as he aspires to be Trelechs' version of Farage/Nuttall. Just a question when the next incident will be and how soon Dewi Llwyd and Pawb a'i farn will have him back.