Llangennech: Michaela and the EDL

Readers of this blog will have seen how Michaela Beddows, one of the more prominent anti-Welsh medium campaigners in Llangennech posted a comment on this blog yesterday.

"Bless you", the campaign group was not anti-Welsh, she protested, and Cneifiwr had totally misunderstood the whole situation. "You would not take one bullet into a battle you would take all the ammunition you could take and that is exactly what I am doing. I am fighting a battle of common sense and fairness", she went on, defending the group's decision to cosy up to UKIP.

Beddows was silent on the group's links with Glasnost.org, run by right-wing extremist Jacques Protic, and she also forgot to tell us about her friends in the English Defence League, those bastions of fairness and common sense.

Thanks to sharp-eyed observers for picking up on the following "misunderstandings": 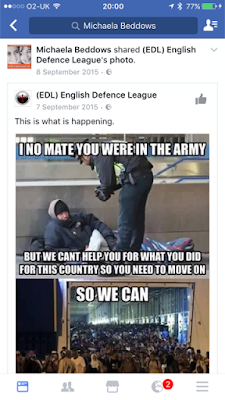 And here she is passing on the views of her friend Protic whose latest rants mix fake news about Islamic rapist rampages in Germany, pro-Putin black propaganda and statements such as "Welsh is a tribal language": 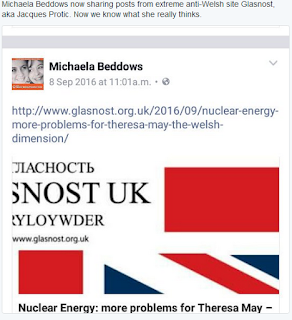 Needless to say, the Hamiltons' meeting in the village last week with assorted Labour activists, candidates and Beddows is now propaganda gold for UKIP: 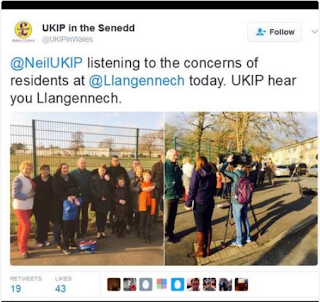 Mainstream media sources, such as the South Wales Evening Post and the Llanelli Star, which have been happily providing a platform for Michaela, the Sewards and others, need to consider carefully what they are helping to foment in Llangennech.

Whilst you are entitled to your opinions I would ask you to say who the 'assorted Labour activists' are please. It is one thing to suggest that they are Labour but another to state they categorically are as you have which as far as I can see incorrect. Thanks.

I suppose it was inevitable that these kindred spirits should find each other.

Are Labour that desperate for candidates that they let bigots and xenophobes like Michaela Beddows stand?, It suggests the local party is in big trouble - lets hope Plaid Cymru or an independent win in Llangennech because the situation is toxic and needs calm heads, facts and willingness on both sides to listen and reach a deal.

Anon @ 15.48 Michaela Beddows is not a candidate, at least not yet!

Anon@ 8.14Four of the people pictured with the Hamiltons are Labour activists. They have all had pictures taken while out canvassing.

Thanks for that Cyneifwr. However I do dispute what you say as I know most of the members and supporters? Can you say which ones and produce the pictures taken whilst canvassing for the Labour Party? They may have supported the Llangennech School Group and delivered leaflets for them but that was not a Labour campaign and people from all political parties were welcome to get involved. Unless it is corrected it sheds doubt on your credibility pertaining to this issue. I do accept however, that you may just be repeated unsubstantiated information from another souce. Many thanks.

The collaboration between Michaela (she says that she is standing as community councillor,Jacqueline S standing for Council election and Neil Hamilton was made clear in Michaela's Facebook post Collaboration of Labour w the far right is unacceptable

Anon @17.50 For a starter, look at the pictures posted on this piece:

One of the pictures is of an adopted Labour candidate out canvassing. Then check out the group photo with Hamilton.

There is more evidence, and more very interesting information is coming in. Stay tuned.

Many thanks for this Cyneifiwr. The adopted labour candidate is definitely not there. The lady on the right in the picture you referred me to is neither a member or supporter but maybe a member of the Llangennech School group. I am most certainly sure the young man on the right was not there so I do think your blog needs amending to reflect this. I will stay tuned. Many thanks.

And now labour Llanelli have control of rural council with "Dafen dolly" the leader . Several of them have been reported to the ombudsman so how can Llanelli people trust these to run a council ? I cant see many cllrs attending the next two months meetings unless they are "dafen dollys" friends or sian caiach ofcourse . I wonder what labour HQ think of it all ? Why havent they closed the clp down ? This normally happens . Then you get across the water the ombudsman intervened in Swansea council fir a lot kess . And Neil McEvoy for what was it ? Oh yes he stated it would be a change from May i believe ? What the hell is happening to Llanelli today ? I sympathis with Plaid and Independent cllrs in llanelli rural and the people of the rural areas ie Bynea where Steve Donoghue was labour inde plaid and now back labour where exactly is his political allegence ? Then the other lab clkr moves from bynea to llangenech how can he represent the people of Bynea ? Sian Caich suppirts them and yet ckaims she peoples first . Bill Thomas claims to support swiss valley yet is standing in felinfoel ? Shahana najmi is proud to start canvassing in lleidi but lives in llwynhendy ? And it was noted setve don saying on her face book well done on selction they wont select me boohoo . Then fozia shahanas sister who wrote "that email" claims to be buisness women when it was shahana on p.o and the other sister on the shop part of john street p.o that their dad run called star9/starnine ltd as a buisness . And then had lorraine johnson when (april 2013)
from amanford p.o working there £115k fraud . It just beggars belief . Im pretty certain there is far more going on .

It is clear that some Labour members have been collaborating with Hamilton, and there is now an attempt by Labour to cover it up.

One of the women pictured with Hamilton was out canvassing for Labour with Jacqueline Seward, and she also appeared in a picture which appeared on the masthead of Llangennech Labour's Twitter account, wearing a red rosette. To claim that she is not a Labour member is ludicrous.

You are also forgetting that Michaela Beddows boasted how she and Jacqueline Seward had managed Hamilton's visit.

Labour needs to get to grips with this situation quickly and honestly.