Visit Wales has launched a glitzy advertising campaign to persuade more visitors to come to Wales. The website ends with this rallying call:

Now, what’s stopping you? Come and create your own legends…

If the tourists flock to Llanelli (well, you never know), they won't need to go to the trouble of making their own legends, because the local Labour Party has been busy creating a whole raft of modern myths for them.

First up, we have the cautionary tale of former Santes Michaela, now Michaela the Unmentionable. She was a Labour Party member, and then she wasn't. As recently as 9 February she was telling the Herald that she was planning to stand as a Labour community councillor. Two weeks later, Lee Waters said that "she does not consider herself as having ever been a party member", but the Labour Party suspended her and said that she had not informed them that she wished to revoke her membership.

We are indeed a land of mystery.

Then we have a crack report put out by ace journalist Abbie Wightwick in the Western Mail, suggesting that an unholy alliance of Cymdeithas yr Iaith and parents in favour of Welsh-medium education had slashed car tyres, and verbally abused members of Michaela Beddows' campaign group.

After apologising to Cymdeithas, the paper then had to print a follow-up acknowledging that the tyre slashing was not believed to be related to the school issue. Next we learned that nobody had reported any incidents of harassment or abuse to Dyfed Powys Police, who must be scratching their heads.

But the Western Mail, Carmarthen Journal, Llanelli Star and South Wales Evening Post had all run with the false story by then.

This is our parochial equivalent of Donald Trump's bowling green massacre. 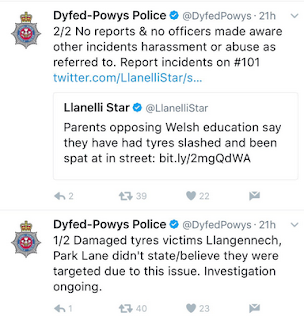 The Vatican waits until someone has departed this world before it begins the laborious process of canonisation, and it requires "proof" that at least two miracles have been performed before a candidate can become a saint. In Llanelli you can meet a real, live saint, Santes Tegwen, whose career in local politics has been truly miraculous.

This blog recently disclosed that Santes Teg had shared Britain First material on her Facebook timeline.

First, she said she could not remember posting it. Then, a couple of days later it was being put about in County Hall that the post was not on her personal timeline, but on a 'dummy' account for dummy voters. Being a very important person, she did not manage the dummy account, but had entrusted that task to another member of the Labour Party. So it was all somebody else's fault.

The trouble with that one was that the post was on her personal account, and was still there several days after Cneifiwr wrote about it.

Speaking to the Herald, Lee Waters tried a new tack. "The post in question is not recent," he span, as though we were talking about something that had happened years, rather than weeks ago in December.

But time is relative, and there are constituents in Llangennech complaining that they wrote to their AM back in September, and still have not had a reply.

By the end of the week, Labour's myth machine was working at full steam. Jeff Edmunds told the Herald that someone had tried to hack his Facebook account and duplicate it.

It was the fiendish work of those nasty Nats who must somehow not only have hacked Tegwen's account, but placed on her timeline the sort of populist, rabble rousing stuff Tegwen would never touch with a barge pole.

Meanwhile, Santes Tegwen got around to culling some of her Facebook friends.

Llanelli Labour is unlikely to take Cneifiwr's advice, but if they did they would be rather less worried about hackers and ask themselves instead whether it was wise to leave Tegwen, with her track record of playing on populist fears, alone and unsupervised with an internet connection. They might also want to take a closer look at some of her friends both on and off Facebook.

But the mystery gets deeper, with Jeff telling the Herald that someone purporting to be a Labour member had e-mailed asking for statements, and those statements had appeared on blogs (plural) within hours.

It occurred to Cneifiwr that many readers may have no idea of who Jeff Edmunds is. Without wishing to be unkind, he is not even a household name in Carmarthenshire, let alone the world beyond it, which makes the sudden interest in what he has to say even more puzzling.

For the record, Cllr Jeff Edmunds is leader of the Labour group on Carmarthenshire County Council, and for what it's worth, Cneifiwr thinks he is a fundamentally decent man who has landed an impossible job

The Welsh blogging world is small, and nothing like this has appeared on any of them. So which blogs would those be, and what did he tell them?

Jeff has reported the matter to Dyfed Powys Police, who must be scratching their heads again.


Nats under the Bed

Cneifiwr is not a fan of Facebook, it has to be said. Too many cute kittens, pictures of babies, people bragging about their visits to the gym and marathon running, rubbish jokes and dodgy "news" sources.

Why anyone would want to hack Jeff Edmunds' account is a mystery, but here is something which has come in from one of Merched y Wawr's field intelligence operatives, codename "Bara Brith":

6.30 Awake and pull back the curtains to another sloeblack, slow, black, crowblack day. It is raining in Llanelli.

7.00 Switch on the radio to listen to the news. Labour has lost in Copeland. I knew it was a bad idea to send Nia up there to campaign. We had held Copeland since 1935, almost as long as we have been in power in Llanelli, but then look at everything Labour has done for Llanelli.

7.10 Tegwen has sent me a picture of a noose on Facebook. What can it mean?

7.45 Go to the wardrobe to pick out something to wear for the busy day ahead. Black, black, black. Yes, I think I'll wear black again today.

8.00 A sound of retching from the hall. The cat has thrown up all over the rug.

8.30 I decide to write some notes for my speech at tonight's meeting - "How dialectical materialism has shaped recent developments in Llwynhendy".

8.45 Tegwen sends me a picture of some electric chairs.

9.20 Lee Waters sends me a message to call him immediately.

9.25 "Hello Lee. How's the weather in the Vale?" I ask, innocently. "I'm not here to chat about the weather, you fool," he snaps. "Get a grip, mun, and tell me what you are going to do about this mess. That bastard Conifer, or what ever that ludicrous Welsh name is, has posted more muck."

"I am working on it," I tell him, "and Gary Poumista Jones has a cunning plan. First we ask Dyfed Powys Police to arrest everyone who says anything negative about Labour in the village, and then we get our members to chant 'Lock her up, lock her up' every time someone says Leanne".

Lee is not happy. "Carwyn has been on the phone and I've never heard him so angry. He's blaming me, for God's sake, but I hold you responsible. Now, get on the phone to the press and tell them it's all Plaid's fault."

"What does Nia have to say about it?" I ask.

"I don't know", says Lee. "Nobody can get hold of her. According to her office she is addressing Vegans for Nukes in Surrey tonight. Just get a grip and sort it!"

Lee slams down the phone.

9.35 That speech is not going to write itself, and so I switch to Classic FM for some inspiration. They are playing the Death March. 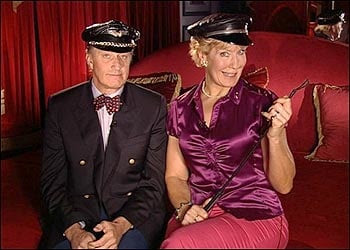 10.00 Ping! It's a message from Christine Hamilton. "Hello, big boy. Neil says he thinks it all going splendidly, and he is happy to help in any way he can."

10.05 Tegwen sends me a picture of a guillotine. I can see this is going to be another one of those days. The rain intensifies.

Is the picture from the Lighthouse Theater, Kettering 2012 when Neil and Christine had that wonderful success in the Christmas pantomime "Cinderella?
They are so wasted as politicians!

Classic! The picture of the Hamiltons cracked me up - cheered me up no end. This has got to be one of your better efforts .. thank you for bringing a ray of sunshine to a truly dire situation.