Council Crisis: What the Papers Say

Before we get down to looking at the papers, there has been a lot of confusion about the availability of a council statement on the legal advice it received. The statement has moved around on the council's website quite a bit over the last 24 hours.

The statement contains links to two documents setting out the legal advice.

The original 2008 advice can be found here.

The report produced by Timothy Kerr QC in November 2013 can be found here.

This blog will be carrying a summary and commentary which will be published in the next couple of days barring any major new developments.

This week's South Wales Guardian shows once again why it is the best local newspaper in Carmarthenshire as it examines and explains the issues involved in the crisis at County Hall. The council's bizarre press release - actually there have been several in recent days - seeking to question the auditor's competence and threaten MP Jonathan Edwards - reminds the paper's editor of Gerald Kaufman's description of the 1983 Labour Party manifesto as "the longest suicide note in history". 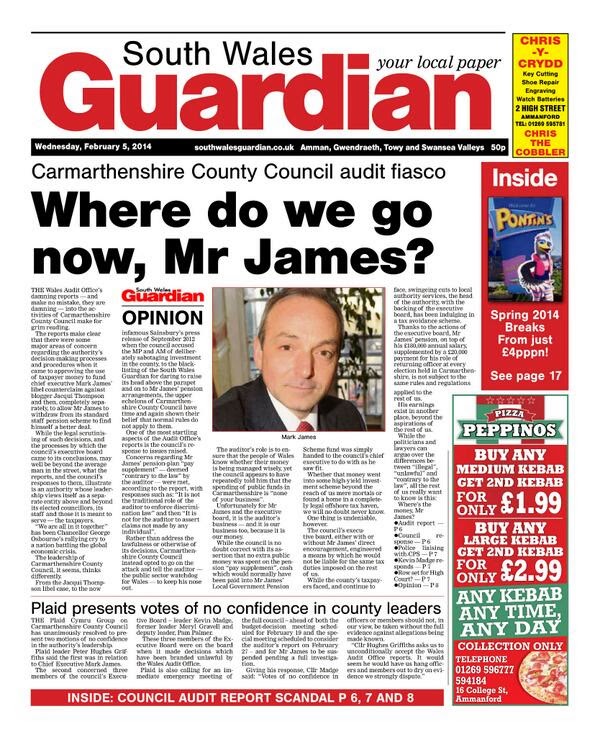 If you live in the area served by the Guardian, rush out and buy a copy while stocks last because this week's edition is likely to fly off the shelves.

Mr James's rictus grin made it onto the front page of the Carmarthen Journal last week as well (here), but not for any of the reasons readers might imagine.

After a review of the blessings he has showered upon the county, including the evangelical bowling alley, Mr James tells the Journal that what really seems to be top of the wishlist for people in Carmarthen is saving the town's Wimpy and opening a Primark store. He can't make any promises, but he'll see what he can do.

As some websites like to say, readers who are interested in this sort of thing may also enjoy a documentary entitled Mad Dog: Gaddafi's Secret World about the late Libyan dictator and his plans to become "King of Africa", broadcast on BBC4 a couple of nights back.

This week's Journal does cover the meltdown at County Hall. Well, it would be difficult to ignore it in a week which has seen the Wales Audit Office's damning public interest reports, calls for sackings, dismissals and resignations of the council top brass, the announcement that the police are looking into matters, the council's bonkers press releases, Kevin Madge's plans to slash and privatise council services, a 4.7% rise in council tax and a Unison demonstration outside County Hall.

After stories including "Sleuthing pupil goes online to find his lost pooch", the Journal has a two page spread (actual 1.25 page spread if you exclude the ads).

First up is the full text of a council press release responding to the auditor's report. Next, we get a few paragraphs explaining that the leader of the Plaid group is going to push for a vote of no confidence in the chief executive, Kevin Madge, Meryl Gravell and Pam Palmer.

That is balanced by remarks attributed to a "council spokesman", including this little gem referring to Plaid Cymru:

Headline grabbing and power is what they are after, not truth and justice.

We get more of the same in another article which quotes Kevin Madge at length before Jonathan Edwards MP is given space to explain why he thinks the council leadership is not up to the job.

On the next page we get the full text of yet another council press release, complete with lengthy quotes from Kevin Madge, announcing that an extraordinary meeting of the council has been called for 27 February and that Kev aims to put all the facts on the table.

Tucked away under a picture of County Hall are a couple of column inches revealing that the police have been asked to investigate the scandals.


Just in case you missed them

For info and bedtime reading.

Excellent piece on west Wales news review on this situation.

Do you know, I've completely forgotten what it was Jacqu Thompson said, or rather was inferred from what she said, that was alleged to be the defamation of MJ/council whatever (like, who gives a sh*t?). Wasn't part of it some reference to the Disney puppet character? Did these Bigwigs who provided the advice do so in the context of the exact nature (wording) of the alleged defamation? Or was it a response in principle about defamation? Anyway, the best advice would have been "Oh FFS, GROW UP!"

I would suggest that, if they are not already doing so, people keep local copies of EVERY iteration of EVERY document, press release, etc from ghe council.

In similar circumstances, the key copies of various drafts of various documents have disappeared, making ot difficult to prove exactly which bits were excised and when.

I worked for the nonentities at County Hall and whilst on paper many have academic qualifications, few had any common sense. They bullied juniors into keeping quiet with threats of dismissing them from their jobs.

Many of the senior personnel I recall, had little emotional intelligence and even less empathy with the majority of their staff. I was glad to leave when I did.

If the Welsh Government were to look more closely at how the County Council is run, maybe they'd find even more problems than is alleged in these blogs.


They claim there is scrutiny, but in my experience there was little critical analysis of what really went on.

We need whistleblowers - those with integrity who can tell their side of these stories.

I too worked for the nonentities in CCC and my experience wasn't so dissimilar to that of anon 21:39. Common Purpose graduates at their worse!

Who on earth is COMMON PURPOSE (CP) I hear you ask? Research suggests that CP is a CHARITY, based in Great Britain, which creates ‘Future Leaders’ of society. CP selects individuals and ‘trains’ them to learn how society works, who 'pulls the levers of power' and how CP ‘graduates’ can use this knowledge to lead 'Outside Authority’. Over £100 million of our money has been spend on CP courses alone, and its been hidden from the public, and members names are a guarded secret. It charges substantial figures for its courses. Matrix for example costs £3,950 plus VAT, and courses for the high flying ‘leader’ can be as much as £9,950 plus VAT. This money is ours, paid by government departments financing senior staff to become agents for CP, instead of loyal to their own jobs.

Trained leaders are encouraged to act as a network, enable other members' plans, and have meetings under the so called Chatham House rules. This effectively means their statements are not attributable to them, nor can attendees reveal information heard at a Common Purpose meeting.

Council Officers are having secret meetings with, for example, property developer Common Purpose friends. No agendas and no minutes. Common Purpose Graduates from the public quango sectors such as the Regional Development Agencies attend, and have the power to award large sums of public money to projects.

It is the worst national example of cronyism, closed contract bids, fraud and corruption. And unseen to the general public.

Readers would be wise to research this organisation. Here are just a few links to start you off.

@ anon 00:23 sadly the whistleblowers who have tried were persecuted and hung out to dry. CCC control by fear and gagging orders!