Back in February 2006 the then Labour Home Secretary, Charles Clarke, announced plans to reorganise policing in England and Wales, drastically cutting the number of police forces. In Wales he was determined to create a single force.

The Tories were unhappy, with Nick Herbert MP, Clarke's shadow, arguing that it would reduce local accountability. Incredibly, one of the options they were keen to pursue was merging North Wales Police with a neighbouring English force.

Because policing has not been devolved to Wales, the Welsh Government and the people of Wales were mere spectators in this debate between Clarke, who represented a constituency in Norwich, and Herbert, MP for Arundel and South Downs, as they argued over where the lines should be drawn on the map.

Fortunately for Wales, Clarke became embroiled in a scandal over foreign prisoners and had to resign. His plans were then quietly shelved.

Whether or not Welsh police forces should be reorganised should be a matter for Wales to decide, and not MPs representing Norfolk and Sussex or colonial nabobs in Whitehall.

"Welsh" Labour has long been divided on this issue with, broadly speaking, Carwyn Jones impotently calling for devolution of policing on one side, and Labour MPs in Westminster opposing any such change on the other.

In the general election campaign Labour in Wales is fighting on two manifestos: a UK manifesto, "For the many, not the few", and a second document entitled "Standing Up for Wales".

On page 3 of the Welsh manifesto Carwyn Jones writes, "And, working together, we’ll devolve policing to Wales – making our neighbourhoods safer after years of Tory cuts and neglect".

On page 96, we are told, "We will bring forward legislation to make the devolution settlement more sustainable as set out by the Welsh Labour Government in its Alternative Wales Bill, including the devolution of policing".

The same words appear on page 105 of Labour's UK manifesto.

Clear enough, you might think, and Labour assures us that the whole party has signed up to this and other commitments.

Or not. Here is an exchange which took place on Twitter yesterday: 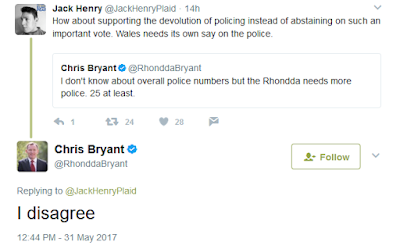 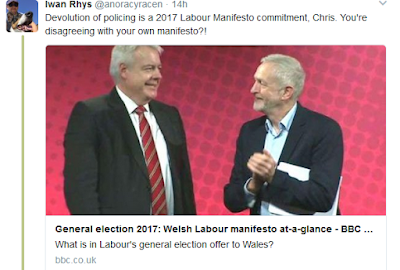 And that was it. Bryant disappeared into the ether.

Since Chris Bryant would have had some involvement in putting these manifestos together and has signed up to them, and since he has consistently opposed devolving policing, it's fair to assume that he knows something that the rest of us don't. Perhaps, buried deep in these two documents, is a clause which could negate what looks like a pretty clear commitment.

And if Chris Bryant is right that Labour is not actually proposing to devolve policing despite what the manifestos say in black and white, how much can we believe any of the other promises?

In a recent programme on Radio Cymru looking back at the Meibion Glyndwr campaign, a retired Welsh policeman recalled how the English high command wanted the scope of investigations to be expanded to include various suspect organisations, including that notorious nest of arsonists and troublemakers Merched y Wawr, so little did they understand Wales.

That Welsh sensitivities are different was demonstrated at this week's Urdd Eisteddfod where police armed with loaded machine guns have been patrolling the maes, presumably in response to orders handed down from Whitehall and to the discomfort of many eisteddfod goers for whom the presence of weapons goes against everything that the Urdd and the eisteddfod tradition stand for.

A oes heddwch? ("is there peace?"). Hardly when children are mingling with machine gun toting police officers, even if those officers were wearing friendly smiles.

There are also very important practical and financial implications to devolving policing, as Jonathan Edwards pointed out in this speech to the House of Commons on 22 February of this year, and it is worth reproducing his arguments in full.

I want to take the opportunity initially to raise some general points about the funding of Welsh police forces. Unlike in Scotland and Northern Ireland, policing is not yet devolved in Wales. Whereas in Scotland and Northern Ireland policing is funded via the usual Barnett allocations, Welsh police forces find themselves reliant upon a funding formula designed in Westminster for the 43 Welsh and English police forces. If policing were devolved to Wales and the usual Barnett allocations applied, Welsh police forces would benefit from an extra £25 million-worth of investment per annum in policing services in my country—if, of course, the money were ring-fenced by the Welsh Government. The Wales and England formula has not been historically kind to Welsh policing.

Dyfed-Powys, my police force, has already faced cuts of £13 million over recent years. This was one of the primary reasons for the very controversial loss of our dedicated police helicopter. I will resist the temptation to raise those issues again here today.

The aborted funding formula review led by the previous Minister last year would have led to a cut of £32 million from Welsh police forces’ funding—a further £7.9 million from Dyfed-Powys, which is a staggering 16% of its budget. The aborted formula aimed to concentrate on socio-economic data and general crime figures as criteria for determining funding allocations. These crude determinations cannot possibly reflect the true cost of policing rural areas such as the ones I represent, and it is vital that the Minister takes a broader view before he publishes his new formula for consultation.
Traditionally, due to Westminster underfunding, local residents in Dyfed-Powys have had to make a greater contribution to police services via the annual precept. It is a typical accounting trick, whereby the burden for funding public services is moved from general taxation on to local taxation, and with the Tory manifesto pledging not to increase income tax during this Parliament, the UK Government obviously have to look at other forms of taxation to make up the numbers. This sort of fiscal strategy is, of course, completely regressive, a point made by several hon. Members.

There is no operational reason why policing should not be devolved to Wales, and it is hugely disappointing that the last Wales Bill lacked the ambition to equalise powers between Wales, Scotland and Northern Ireland—not to mention cities like Manchester, where policing powers are being devolved. With all four Welsh police commissioners supporting devolution of policing and with a clear financial dividend, it is clear that narrow ideology is driving Welsh policing policy in Westminster.

The area cost adjustment factor that the police use for calculating the police main grant is skewed in favour of areas in the south-east of England where the cost of living and salaries are higher. Although this may be necessary, it does not consider the higher costs incurred by rural police forces for providing services in rural areas. The Department for Environment, Food and Rural Affairs published a report in 2014 outlining how the cost of service delivery in rural areas is higher than average. The report mentions travel costs and travel downtime. Evidence shows that travel time for police forces in rural areas is 25 times longer than in metropolitan areas.

The issue concerns the size and shape of the areas that some forces are required to police, and particularly the distances they must travel to deal with public safety, welfare and transport incidents—a point made by Steve Double. Population in a small compact police force centred on a single city will make less demands on travel time than one in a large irregular police force area with multiple population foci. The City of London police serve a resident population of fewer than 8,000 people based in 290 hectares, while Dyfed-Powys police serve a resident population of over half a million people spread across more than a million hectares of largely dispersed towns and villages.

The UK Government report also outlines the difficulty of channel shift. As heard in countless speeches from Plaid Cymru Members, digital infrastructure is a major problem in our country. Too many of our communities are without broadband. Our police forces therefore need to rely on other ways to communicate with their service users that are more time-intensive. For example, a call handler can deal with only one voice caller at any one time, but may deal with several simultaneously using webchat. Another example is the issue of holding cells. Owing to its geographical territory, Dyfed–Powys needs three holding cell units, which must be manned simultaneously on a 24-hour basis. That is obviously more expensive than having a single central unit. I could go on and on giving examples of that kind.

It is hard to conceive of a simple police grant formula that can encompass such a range of circumstances as the national and international capital city grant. The specific needs of the City of London and metropolitan police forces have long been recognised, primarily through that grant, but Cardiff, which is also a capital city, does not receive it. What consideration has the Minister given to awarding Wales a proportion of the national and international capital city grant so that the unique challenges faced by police forces in the capital city of my country can be adequately addressed?
When it comes to the funding of police services in my country, the devolution of policing to Wales is a political and financial no-brainer. Let me end by saying, Madam Deputy Speaker, that this is probably the only time you will ever hear me say something positive about the Barnett formula.