Havard Hughes and the Nasty Party

The Tories, LibDems and UKIP have finally got round to sending out election communications - too late for many postal voters.

We can safely ignore the LibDem and UKIP efforts because saving their deposits is about the most they can hope for, but right from the word go the Tories have treated the public and the democratic process with utter contempt.

There are still old-fashioned voters out there who like to talk to candidates and read their literature before casting a vote. For most of the campaign, Theresa May has avoided rubbing shoulders with unvetted voters, refused to engage with the press, refused to take part in televised debates, refused even to talk to Woman's Hour on Radio 4, opting instead to feed the electorate with endlessly repeated, meaningless slogans.


Locally Havard Hughes has adopted much the same tactics.

His large and glossy leaflet is for the most part a re-hash of his profile in the Western Mail, reviewed by this blog here.


He claims that being chosen (parachuted in would be more accurate) to represent the Tories in Carmarthen East and Dinefwr is the greatest honour of his life. If that were so, you might think he would have been a bit more active during the campaign, but so far his few public outings, dressed in Sloane Ranger country weekend attire, have been confined to Llandeilo and the surrounding area.

Roughly half of the leaflet is given over to Brexit and Theresa May. He is "Theresa May's candidate", and she is, yes you got there first, "strong and stable". She will deliver a "good Brexit", but he does not tell us what a good Brexit will look like.

Preposterously he claims once again that he would join Theresa May round the negotiating table.

No, he won't, and he won't get within several hundred miles of it.


In this puerile and irresponsible fantasy, it is 1940 all over again, with plucky little Britain standing alone against the evil Juncker and his goose-stepping bureaucratic army who are determined to break the British economy, with Plaid cast as treasonous fifth columnists.

And that's it. No policies, just tired and empty slogans and ludicrous accusations.

The rest of the leaflet is devoted to claims that he is really a local, Welsh-speaking candidate. Yes, he grew up near Carmarthen, but his entire adult life has been spent in England, mostly in London which is where he actually lives. In another breath he tells us that he comes from a long line of farmers, but in the next he tells us that his father was a solicitor and that his grandparents were shopkeepers.

Beneath a picture of a slightly paunchy middle aged man in a smart office shirt and slacks posing with an axe, he tells us that he likes to keep fit by chopping firewood. 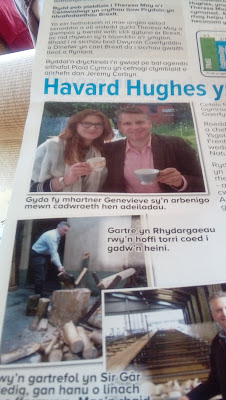 There may be people out there who vote for candidates on the basis of rubbish like this, but there can't be many.

The log chopping came up again at the beginning of a Q&A with an audience of young voters on S4C's Hacio programme (link here, 12 minutes in) last night.

Hughes sauntered in looking a bit like Michael Gove, carrying a large wad of papers. Bearing in mind that he is in the PR business, he should have known that the bundle of papers was going to be useless in front of a live audience. If you don't know the answer to a question, fumbling around in a pile of papers is not going to work.

What followed was 10 minutes of excruciating embarrassment as he mangled his way through his pitch, trying to work the words "cryf a sefydlog" (strong and stable) into every answer. The effect was like a Dalek that had been plugged into Google Translate.

Here he is on the subject of Jeremy Corbyn:

At which point the young man who had asked why Theresa May was not prepared to debate with Corbyn politely interrupted to point out that Hughes was not answering his question.

Ignoring the way he butchered the language, this was crude, puerile and dishonest, and reflects the tone of the rest of this car crash performance. Apart from anything else, Corbyn would have a strong case for suing Hughes for libel.

Little wonder that the audience, who were politically balanced, shifted uncomfortably in their seats, raised eyebrows and grimaced as Hughes lurched and ground his way through.

For someone whose career is all about communication, Havard Hughes is a remarkably poor communicator.

Hacio was pre-recorded, and last night Havard Hughes ventured back to Llandeilo to take part in a hustings along with the other candidates (except Neil Hamilton for UKIP who has boasted that he has not set foot in the constituency since the election was called).

The sort of people who go along to hustings are by definition interested in politics, intelligent and informed debate. Havard Hughes had other ideas.

Again he turned up with a huge wadge of papers and put on a performance which relied on endless repetition of "strong and stable" (audience groans) and smears.

Jonathan Edwards was nothing but "a troublemaker on the sidelines". An audience member with an English accent commented that he would rather be represented by a troublemaker than a lapdog. Just as in his leaflet and his Wales Online profile, Hughes told incredulous voters that he would be sitting round the EU negotiating table with Theresa May.

The audience bristled at being fobbed off with empty slogans and crude attacks on opponents in what is likely to be their only chance to hear from the Tory candidate before polling day. To make matters worse, several members of the public pulled him up on the pronunciation of Dinefwr, having assumed that a "local" candidate would at least be able to pronounce the name of the constituency.


It is probably for the best that we leave Havard Hughes there, raging incoherently away in his bizarre fantasy world.

Arrogant plonker is my description of Tory boy . I was at the hustings and if he thinks that performance was going to win votes. But then he will retire to a safe Tory seat

Everyone in plaid is fighting the wrong campaign.

Meanwhile Labour are doing the 'Vote Labour to beat the Tories' ' Only Labour can beat the Tories ' stuff. So what do the voters do, with the 'evil tories' thing from all and sundry in every party resonating in their heads?

They vote Labour to keep out the Tories

bois bach - if ever there was a parody of a tory here it was, straight out of a Harry Enfield sketch. he was heckled no end and deservedly so, then i saw the S4C programme and thought god this is what i sound when i try to speak Spanish, !!!

He was disastrous at the hustings.Even poor old Norma (UKIP 2015) was better.Come back Mathew Paul please!

I agree with Lionel. Until Plaid Cymru stops believing in 'progressive' alliances with English parties, and viewing Labour as fellow-socialists, there's no hope for Plaid, or for Wales.

His interview in this week's Herald is well worth a giggle or seven.
It's the reading equivalent of listening to the music they introduce the clowns with in the circus.

Well i been to vote in this horrible weather . And for the FIRST (in 30+years) time ever i have NOT voted labour in Llanelli .