I am writing to complain about a recent Visit England Tours trip my wife and I took with your company.

We booked and paid online, and about a week later our travel documents arrived. The glossy brochure describing our itinerary would seem to have been written by someone not wholly familiar with the English language.

We got the gist of parts of it, but some of the information was complete gibberish and frankly weird. I quote:

There is necessity reach the place start punctual. If you will arrive platform one ten two later than 9.30 the morning, not will be means join with the journey........There will be a small house on the bus. Not will be allowed come with cream ice with hand. Enjoy out across.


We arrived at Euston Station at the appointed time, and joined a huddle of about 30 other passengers to be greeted by the first of our guides, whose name was Heinz. Heinz welcomed us "in Oyston" and accompanied us to a place he called Leyeg-ton Bootsart where we left the train and boarded a bus.

Giovanni took over from Heinz, and we travelled across country, going through a small town called Bitch-ester and from there across the Cotswolds to a big place called Glow-chester. From Glow-chester, we went on to another city called Vor-chester, and thence to a smaller town which Giovanni said was the birthplace of a famous Italian-sounding poet called Siaccaspiri.

In the coming days we got to see a lot more of England in the company of our cosmopolitan guides: Var-vick, Likester, Logborog, Ber-vick on Tveed and back down through Carlisslee and the countryside of an area called Lancas Hire.

You get the picture, Mr Smith.

Now, I would like to make it clear that we are not bigots or racists. Your staff were charming and helpful, but we and the other passengers felt that you really ought to spend a little time training them in how to pronounce the names of places we visited. And it certainly would be a good idea to send your brochure off to a professional translator.

One of the passengers told us that she was pretty sure it had started life in Welsh and been translated by someone word for word from a dictionary. And for your information, there was no little house on any of the buses, just a rather smelly toilet.

A week or so later, Mr G.B. received a rather flannelly reply from the customer relations department of Visit England Tours, thanking them for their "valuable feedback", and expressing satisfaction that the couple had enjoyed their trip. Staff received extensive training to ensure the "best possible customer experience", it added.

Of course, Mr G.B. was complaining about his experiences on holiday, but in Wales this is something Welsh-speakers are confronted with every day as they use transport and other services which are funded wholly or in part by the taxpayer. Garbled place names, marketing material and written information in Welsh which is excruciatingly bad, unintelligible or even misleading.

One of the worst offenders is Arriva Trains, but there is no shortage of examples from other bodies, and besides receiving public funding, what they all have in common is that they have adopted Welsh language policies which promise to respect Welsh speakers and treat them equally.

Several of those stations are on the Heart of Wales Line. Arriva went to the trouble and expense of producing a glossy, colour brochure to advertise its services, but when it came to the Welsh wording, the company clearly decided that sitting someone down with a dictionary would be good enough.

The results are embarrassing, to say the least. Does Arriva really have nobody in its marketing department, or in any of its offices, come to that, capable of writing a very simple sentence in Welsh? 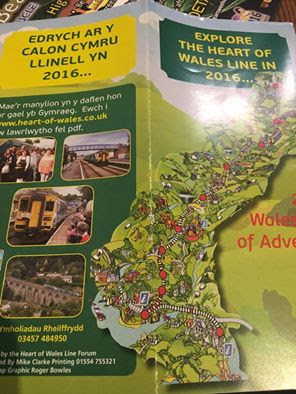 Arriva's website is allegedly available in both languages, but if you click on 'Cymraeg', this is what you will  be presented with if you want to subscribe to the company's newsletter:

Arriva was awarded the franchise in 2003. Thirteen years into its 15 year franchise, and if you click on the "Contact Us" menu in Welsh, you get a grammatically incorrect sentence telling you that this page is currently not available in Welsh, and that they are working on getting a translation "as soon as possible".

It is difficult not to conclude that the contempt Arriva shows its Welsh speaking customers may well extend into other areas of its service as well. If they are that reluctant to spend a tiny amount of money on translating a few lines of text, what else are they skimping on?

There have been plenty of complaints over the years, but despite being in receipt of huge amounts of public money, Arriva has been deaf to them all.

This is not only insulting, but it also reflects badly on Arriva. It would not be acceptable to mangle place names on trains in England, and it is not acceptable in Wales. It would cost next to nothing to ensure that staff can pronounce station names before letting them loose on the public, and it would cost peanuts to update the website and ensure that marketing material was written in something other than pigeon Welsh.

But it's not just Arriva. Here is a recent tweet from the so-called "National" Botanic Garden of Wales, available in English only. The message is, surely, that Welsh-speaking children and families are not expected to turn up and join in the fun: 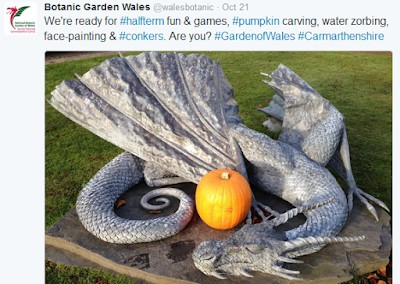 Meanwhile, over at ARCH (Welsh for "coffin" or 'A Regional Collaboration for Health'), bigwigs from the cash-starved NHS, Swansea University and other partners have been whooping it up at one of those weird MBA-meets-New-Age events to encourage blue-sky thinking, and so proud are they of their doodles and revolutionary thoughts that they have been happily tweeting the results to the rest of the world. 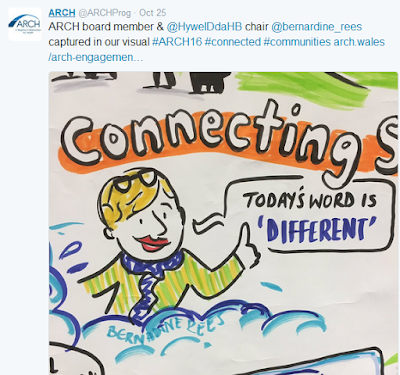 Since ARCH is supposed to be about improving the health and wellbeing of people in the south-west of Wales, it is reasonable to suppose that Welsh speakers are included in their target clientele.

But on second thoughts, it is probably for the best that the sort of profound rubbish being spouted by Bernadine Rees is available in English only.

huge problem with lazy attitude towards the Welsh language, much of it within that large segment of native population that has either not bothered or had opportunity to learn. Along with in-migrants who think they are culturally a cut above these people attack use of Cymraeg at every opportunity.
I see it as a mix of 1)self loathing and inferiority complex, 2)superiority complex mainly among those in- migrants who have relocated from darkest England and feel free to bring their baggage with them, and 3) overt racism fostered by over exposure to the rubbish being spouted by UKIP and the uncouth "militant" yobbo mix that inhabits the layer of society that regards UKIP as a bit soft and wet !
I've no idea what proportions of the hate market each of these types can claim to occupy - indeed it doesn't matter. The fact that these type of antics are tolerated and possibly encouraged by our government is in itself a wicked attack on our society. No amount of statutory rights will add up to any value if outfits such as Arriva and the BBC are allowed to indefinitely piss down our backs and demand we be grateful for their gift of warmth.