This is the first of two posts looking at different aspects of the hostility and lack of respect afforded to people who speak languages other than English in our brave new post-Brexit Britain. The second will deal with the deplorable record of two bodies which serve the public in Wales and which both fall well short of the promises they make.

Two different sides of the same coin: on the one hand official indifference and neglect bordering at times on contempt, and on the other ugly, thuggish and often overtly racist attitudes which have resurfaced to breathe the oxygen of hatred and bigotry unleashed and egged on by UKIP, the Tory right and elements within the Labour Party.

All of the examples which follow appeared on Twitter yesterday and this morning. Random, unconnected acts which speak for themselves.

First up is an account by journalist Ciaran Jenkins of a train journey in England on 22 October 2016. 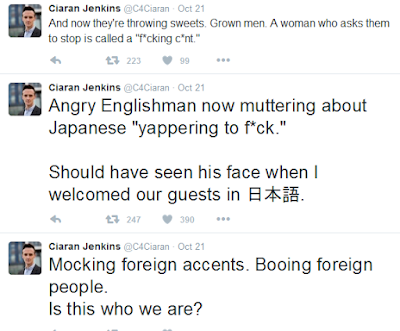 The second incident was reported, without the faintest hint of irony, by Murdoch's Sun, which was at the same time leading a witch hunt against Gary Lineker for taking David TC Davies, Tory MP for Monmouth, and others to task for their diatribes against refugees. 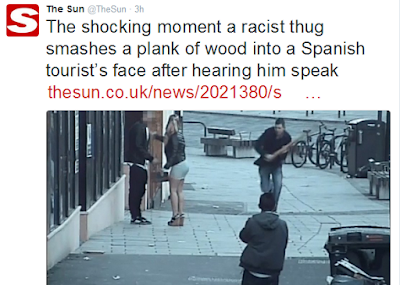 Today, the rag follows that up with this "Exclusive" headline:

You get the message.
But you don't have to be "foreign" to be publicly rebuked for speaking "foreign", as BBC journalist and presenter Aled Hughes found yesterday.

Aled, whose Radio Cymru morning show Cneifiwr enjoys on his way to work every morning, was visiting Tŷ Mawr y Wybrnant, the birthplace of Bishop William Morgan who translated the Bible into Welsh in 1588.

It is impossible to exaggerate the importance of William Morgan's translation to the Welsh language, and Bil, the National Trust's keeper was talking to Aled when they were interrupted by someone who clearly had very different ideas about the place.

(In Tŷ Mawr y Wybrnant talking to Bill, the keeper, in Welsh. A woman comes in behind and calls out loudly and drily "English")

("Before @clegyrog hears her saying that she can't join in in a "foreign language". Bil was talking to children aged 3, 6 and 7 at the time").

Here's a short and rather beautiful film of Bil (or Wil as he is called in the video) talking about the old house.

If you think the message is not getting through to the rest of the world, here's the latest cover of Charlie Hebdo:

If you think that is rude and offensive, you clearly haven't been listening to our Foreign Secretary, Boris Johnson (EU a Nazi Superstate, and "picaninnies"), or our gormless Welsh Secretary of State, Alun Cairns ("greasy wop" Italians).

What I find really worrying from your report on the incident at Ty Mawr y Wybrnant is that there seems to have been no response from the Welsh speakers being insulted.

Unfortunately as far as most people in Europe are concerned "English" is synonymous with "British" which is why I go to great lengths when in France to explain that I'm Welsh, not English and that we are a distinctly separate, proud (but, I hope, not arrogant), country.