Thank you to Anon for finding a link to a COASTAL project meeting held in September 2012 which provides some details of an investigation into allegations of maladministration which was being conducted by WEFO (the Welsh European Funding Office) at the time. Here is the link.


Carmarthenshire County Council's branch of the COASTAL project has used part of its very generous funding to produce a film (here) to tell us what it does.

The film is nicely produced, although someone should have used a spell checker for the small amount of text which appears, and it runs to just over 16 minutes. There is some nice upbeat music, lots of shots of people making things in craft workshops, and short interviews with people who have been helped.

There is no doubt that many of the people who have taken part have enjoyed the experience and learned some new skills, but the film and the project itself suffer from a fundamental problem. The goal, and the reason why the EU provided so much money, was to get people into full-time, long-term employment. Training courses and teaching people new skills were meant to be the means to that end. By that measure, COASTAL has been a truly epic failure.

The original budget for the COASTAL project was £51.7 million spread over six local authority areas across four and half years, and the project is now coming to an end. What the final cost will be is not known, but the film ends with the following message:

"By the end of the COASTAL Project we will have

The basis on which COASTAL was granted funding in the first place was that it would help 9,000 people, support 5,400 to gain a qualification and put 2,870 into long-term employment.


What is noticeable from the film is that quite a few of those who have found jobs have found them in the council's staff canteens or at council-supported ventures, such as the Botanic Gardens.

Very, very few have found jobs in the private sector, and it is questionable how sustainable and long-term some of the jobs that have been found really are.

By chance, an article on this blog about COASTAL coincided with a short piece in Private Eye pointing out that the Westminster Government's decision to close the Remploy factories had been a disaster. Two thirds of the those thrown out of work had been unable to find employment, while a good many of those who had found work were former Remploy staff in Halifax and Fforestfach in Swansea. There the workers came together and formed a cooperative with their redundancy money (BBC story here). 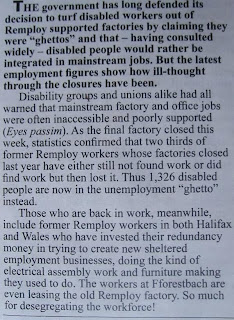 One other aspect of the film which is extremely disappointing is that it is all in English. Not a word of Welsh anywhere, even though statistically around half of COASTAL's target client base in Carmarthenshire will be Welsh speakers. Having watched the film, it is a fair bet that quite a few of those interviewed can speak at least some Welsh, and several were more than likely brought up with Welsh as their first language.

There will also be potential clients of COASTAL in Carmarthenshire who are much more able to express themselves in Welsh than English. What about them?

It is fair to say that some of COASTAL's clients with learning disabilities might struggle to learn a second language, but for those who can speak the language or are capable of learning it, an ability to speak Welsh can be a very important asset when it comes to finding jobs in many parts of the county.

Employers looking to take someone on in a shop, a cafe or any other business which has significant numbers of Welsh speaking customers will naturally regard an ability to communicate in Welsh as either essential or a very desirable skill.

Perhaps there is a Welsh-language version of the film out there somewhere, but if so it has not been publicised by the council. Was the use and promotion of the language part of the agreement underpinning the public funding package in Carmarthenshire? If not, why not? Is this in fact just another example of the council's two-faced approach to the language, saying one thing in public, and completely disregarding it otherwise?

A couple of times during the film COASTAL managers express the hope that the project will continue in some form or other, but serious questions need to be asked before any new funding is agreed, and the Welsh Government and the participating councils need to ask themselves whether the money would not have been better spent helping set up cooperatives, as in Fforestfach.
Posted by Cneifiwr at 11:48

Even if we ignore the fact that most of the 100 jobs created are in the council, and assume that they are all permanent and full time, then that is £517,000 per job created!

"What is noticeable from the film is that quite a few of those who have found JOBS have found them in the council's staff canteens or at council-supported ventures, such as the Botanic Gardens." No Cneifiwr, NOT JOBS ... placements i.e. time limited traineeships!!! Come on Cneifiwr ... think .... positive outcomes.

so £51 million across 6 welsh counties and only a 100 jobs created what is the cost per head per job then? is there anybody bothered about this appalling waste of european money just used to keep incompetent council workers in work? Ye gods i despair this has been oging on for 20 years and nobody bats an eyelid, meanwhile no improvement to skills, infrastucture and transport links in west wales no wonder we are a third world country

As I have noted over on my blog, more than once, it is remarkable how so much EU funding has been wasted with, apparently, no criticism from the donor.

We can but hope that strict conditions are attached to the next round of structural funds (beginning next year) to ensure that these are better spent.

According to the evidence below WEFO have followed up a complaint of maladministration in the Coastal Project. Rumour has it that WEFO are currently carrying out an intense investigation.

You probably won't print this, but I must jump to the defence of COASTAL in Carmarthenshire as I work for them and think I'm entitled to offer another view point. The figures you are suggesting are wrong as are many of your assumptions. To date Carmarthenshire alone is on target to deliver well over 100 work outcomes alone and this will rise substantially before the project ends. These are proper jobs, not placements and less than half a dozen are jobs within the Authority... if you got your facts right you'd know this.

The 'incompetent' Council workers Gaynor alluded to, are in fact a team of dedicated and experienced staff who are supporting people who otherwise are likely to be left marginalised and isolated. By funding training and helping our paricipants into employment, they cease to be a burden on the benefits system and their improved well-being is immeasurable in terms of what the health service saves.

I can't speak for the other areas, but I can assure you we are stringently monitored and audited and there is no maladministration. I could go on, but instead of being detractors, come out of the shadows. I'd happily welcome anyone to visit COASTAL in Carmarthenshire and see first hand the wonderful work we do.

@ B Harrison - you are of course entitled to offer your viewpoint but if your comment is to be believed and given any credence then instead of generalising, you might want to provide readers with facts, figures and supporting evidence.

In respect of Cneifiwr's figures, may I suggest as a COASTAL employee, you take an interest in the project you work for and do some research. The evidence is in the public domain!!!

As I am at present on the Coastal Project I think you really need to look into the running of this white elephant. All the staff are doing is trying to keep their current expenses to a minimum so that it can be carried over to a new "project" when the Coastal Project ends. They have no empathy or experience of helping people with complex means. They do not try to find work experience sponsors for the clients. Their flagship café is in County Hall, massive outlay in a basement room, not visible to the public. I could go on and on, but you seem to know.