One of the intriguing aspects of the campaign currently being waged against relocating Ysgol Dewi Sant to Llanerch Fields in Llanelli is that it has been fought almost entirely through Facebook, with the mainstream media paying scant attention to it until recently.

Leaked e-mail correspondence from the small group running the campaign shows them complaining repeatedly that the local press was failing to bang the drum for them, but the flipside of that coin was that the campaigners were able to spread their one-sided message without challenge or scrutiny.

Fair play to Newyddion 9 on S4C for shining some light on this story a couple of weeks ago, and now also to the Llanelli Herald which led with it this week: 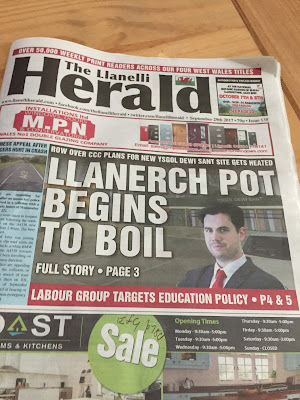 Campaigners will no doubt see this belated upsurge in interest and scrutiny as a conspiracy cooked up by Leanne Wood's black ops division.

The unsurprising truth is that the self-appointed campaign group does not have the unanimous support of the local community it claims for itself, and that the campaign itself has been built on distortion, disinformation and pandering to prejudice.

The alternative is the retention of a large expanse of grass no longer used for organised sports because of its poor condition, and liberal amounts of dog mess for kiddies to roll in.


Rather less explicable is the failure of the council's bloated news and PR operations to do the job they are so richly resourced to do and ensure that the scheme is properly presented and promoted.

If Carmarthenshire County Council and Y Cneifiwr make for unlikely bedfellows, lined up on the opposite bench is an even more unholy alliance of NIMBYs, bigots, the far left, Cllr Rob James and Lee Waters AM, some of whom have very different agendas. 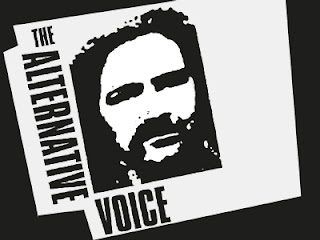 A couple of days ago the Carmarthenshire branch of Unison issued a statement which takes the form of a letter addressed to the school's head, reproduced from Twitter below. 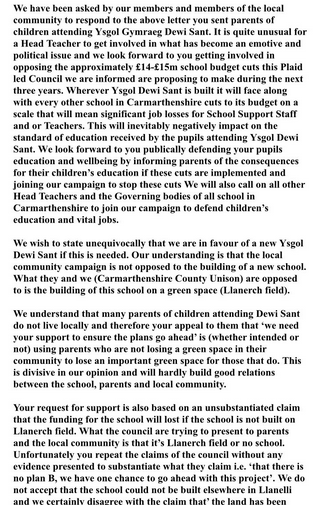 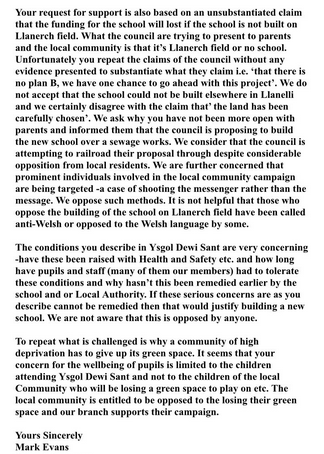 The first thing to say about this is that local Unison members Cneifiwr has spoken to are exasperated that their branch secretary would once again rather fight high profile political battles than looking after the interests of the union's many low-paid members.


What on earth has Llanerch Fields got to do with Unison?


Even if Mark Evans were justified in writing a letter, it should have been addressed to the school's governors and not the head teacher, who is in no position to respond to what amounts to a vicious political and personal attack. The rant about cuts to school budgets is, of course, completely irrelevant to the Llanerch Fields issue, and should have been addressed to the council.


But perhaps he was taking his cue from Lee Waters AM who used the floor of the Senedd to launch an attack on the staff of Llangennech School whom he claimed had misled him and his family about plans to phase out that school's English stream - before the plan had been adopted by the council.


Both were grossly unfair to professionals who cannot answer back.

Next comes the accusation that the head is lying about the school losing the £9.1 million allocated under the 21st Century Schools programme.

The funding, which comes from both the county council and the Welsh government, is predicated on the school being built on part of Llanerch Fields, and comes with many strings attached, including consultations and exhaustive technical evaluations.

If the council were to turn around to the government at this very late stage and say that it had changed its mind, the funding would be withdrawn, as Mark Evans ought to know. You cannot just put the £9.1 million in a piggy bank and wait for a few years while an alternative site is found, tests carried out and detailed plans drawn up. Government and local government budgets do not work like that, and as he knows, schemes of this kind do not have a 'Plan B'.

The reality is that if the campaign succeeds, the children and staff of Ysgol Dewi Sant will face years more of cramped and unacceptable conditions.

As for the "targeting" of prominent individuals associated with the campaign, does Unison really want to align itself with people who describe parents of Ysgol Dewi Sant as brainwashed plebs, and the head of the board of governors as a "jumped up Welsh tosser"?

Next is the completely false claim that the new school would be built "over a sewage works". There is no sewage works on Llanerch Fields, but what are called attenuation tanks. This is how the council and Dŵr Cymru explained the function of the tanks to the campaign group:

In terms of DCWW [Dŵr Cymru/Welsh Water, Ed.] apparatus on the site, it has been established that a number of attenuation tanks have been constructed under the recreational ground to the North of the site.

Having protested that he and his branch are all in favour of a new school - just Not In My BackYard - the final paragraph gives the game away. True, the pupils of Ysgol Dewi Sant are drawn from a wide area, but Llanerch Fields is bang in the middle of the school's catchment area, and it includes children who live close to the site.

Just like the campaign group, Mark Evans is trying to portray Ysgol Dewi Sant, and by extension Welsh medium education, as something belonging to an alien, privileged elite being imposed on the area.

And finally we come to the intriguing political aspects of this saga.

Remember all the uproar coming from sections of the Labour Party about entryism before the general election? It's gone awfully quiet.

Let's hope no one tells Carwyn.

Does anyone doubt that Labour's Rob James is using his Cllr role to attempt to score party political goals based upon the slightest whiff of a rumour that PC have to make a ££ decision on something whether its true or false. Does anyone doubt that the dinosaur demogogues in Labour in Llanelli have their hopes pinned on his CCC career being a springboard to future success with selection at a higher level? Labour offer games. Labour do not offer alternatives.

Speaking of alternatives. Watch out for those Independents too. Shifty buggers. Entitlement and self importance. Play their electorate as an 'independent' but then cosy up to party politics.

"We wish to state unequivocally" is classic Spartism. I can imagine it being written with a clenched fist held aloft.

Perhaps it would be an idea to ask Ysgol Dewi Sant school governor Councillor David Darkin (Llanelli Town Council representative, Labour, Elli Ward) where he stands on this issue?

If it's anything like the teachers and pupils in Dewi Sant, he's standing close to a bucket thanks to the leaking school roof. The school building is in an appalling condition and delaying the build of a new school is shameful. Who is Ysgol Dewi Sant's Carmarthenshire County Councillor governor representative? Do they even have one?

As someone who has worked in local government in the South Wales valleys for over 40 years and was a member of Unison since its inception (previously NALGO, NUPE etc.), I am not supprised by Mark Evans letter and his intervention in the campaign to block the new Ysgol Dewi Sant.

Over the years, the incestuous relationship between the Labour Party and Unison officials was often detrimental to the interests of ordinary members of the Union. The tribalism of the Labour Party often manifested itself within the union, particularly when Unison, instead of working with other political parties to safeguard the interests of members, chose instead to align itself with the ruling Labour administration.

At Llanelli, Unison officials are clearly returning the favour. Unfortunately, the ordinary member of Unison are being drawn into this campaign in the name of their union.

If members jobs or conditions are threatened in someway then it has a valid reason to intervene and protect its their interests. Jumping on the bandwagon to support a dubious campaign that has unsavoury political undertones does nothing to help its members or the good name of the union.

Attenuation tanks are all over Llanelli, filling up after every rainfall lasting more than half an hour according to former Cllr Bill Thomas. The Sewage is diluted by surface drainage from roads and land drains but the image of the tanks quietly draining into the sewers later is sweet but not accurate. The truth is that they only give a short respite to the overloaded sewage treatment works. Dwr Cymru are always saying we need a another tank the size of Parc y Scarlets to prevent sewage discharges. The truth is that the contents these tanks are often just discharged into the Loughor Estuary to prevent back flooding of the locality. Llanelli Town is currently being tunnelled under to drain much of the town's surface water directly into Delta Lakes in an attempt to further offload the sewers.
With increasingly heavy rainfall and sea level rising the elegant gravitational drainage is often assisted by pumping out these tanks into tanker lorries. Despite the dilution it does often stink and I doubt these tanks will ever be decommissioned as they are a vital part now of preventing sewage back flow flooding which is still not uncommon in Llanelli.
Its a shame this has become a political battle because there is good support for Welsh Language education throughout the town. The problem is the old one of decisions being made by the great and the good of Carmarthenshire Council without bringing the local community on board and properly assessing the suitability of the site.

This site is suitable only because it is public land and can be appropriated. I don't believe it is the best site but it is clearly the most convenient for the County Council. When will openness and transparency break out on jail hill?
This is not a re-run of Llangennech, it is a re-run of many contentious planning and land use/disposal issues like Park Howard, the Eastgate demolitions and Stradey Park. So far the Council has always steamrollered them through.

Doesn't that letter writer and fibber know what at paragraph is?