Time to catch up with the claims being made by some of our elected representatives in Cardiff Bay.

First up is Ken Skates, Labour AM for Clwyd South:

This tweet went out on 13 April before the postal ballot papers had been printed and dispatched, what with nominations only closing on 9 April.

The tweet was subsequently deleted, but packing that many porkies into a single short sentence deserves recognition.

Almost in the same league is Joyce Watson, Labour Assembly Member for Mid and West Wales, who put out this message on 16 April:

The reason Leanne didn't say it is because it's not exactly true.

According to the council itself, just 11 two-bed bungalows have been built in the county (all in the Labour-held Llanelli constituency) since Labour took over leadership of the council in May 2012, with one other specially adapted bungalow having been completed. This year the council is not expected to build any council houses at all.

Something else Joyce probably won't be telling voters is that the Welsh Government recently ranked Carmarthenshire 21st out of 22 local authorities for delivery of affordable homes.

If she has time, Joyce may also like to pick up a copy of this week's Carmarthenshire Herald and turn to page 5 where she can read all about the Brynmefys estate on the outskirts of Llanelli where there are a lot of derelict council homes, some even with trees growing through them.

One of the main reasons for this sorry state of affairs according to council sources is that Brynmefys is not on a bus route, which is probably understandable given the state it is in and the fact that hardly anyone lives there any more.

In his defence of Carmarthenshire County Council last week, Kevin Madge warned that abolishing the council would mean the end of the council's "10 year housing plan".

Anon, who seems to reside in County Hall, objected strongly to the use of an image of a run-down council house taken from a council report. Not only was the house not at Brynmefys, but Cneifiwr was accused of breaching copyright.

So here is a picture of something which shows what Brynmefys actually looks like. Unfortunately for Anon, the truth is even more damning than the original picture. 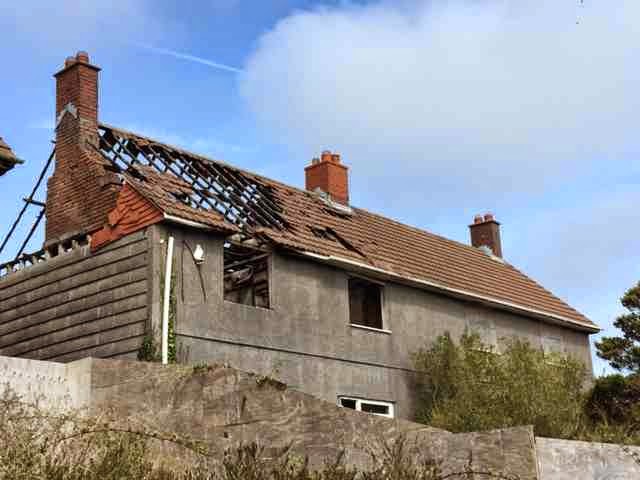 Brynmefys is on the main Llanelli - Carmarthen bus route, which is a reasonably frequent service.
At present 3 properties are (owner) occupied out of a couple of dozen, the rest are derelict, some burnt out. Squatters have been a problem.
CCC had planned to sell the sit to Gwalia, but they pulled out some time ago. The council now intend to dispose of the site, probably for clearance and the building of 'executive housing'; in part the site has terrific views of Gower, and the sea.....
By the way, the photo is not of Brynmefys.

Thank you Anon. The picture is taken from a 2009 council report on bringing empty homes back into use. Clearly, the strategy has not been very successful, bearing in mind the numbers of empty homes there are across the county.

If anyone has any up-to-date pictures of Brynmefys, please send them in.

As for Ken Skates, it is bad enough for any AM to be peddling blatant falsehoods, but Skates is also a minister.

Once again you are wrong CNeifiwr , the Empty Home Team is One Officer and last year 90 houses were turned into homes. Imagine if there 2 or 3 officers , they have to deal with landlords who seem to want to sit on empty houses or absentee landlords living across the border. Empty Council Houses are quickly turned around .
Don't moan at the Council moan had the Landlords

Can we look at the crux of the matter - why doesnt the council sell the plots cheap to local people so that they can self -build family homes there? & Create a landtrust so that it remains affordable housing - the site is an eyesore and it makes my blood boil to see empty houses like this when there is such a shortage of affordable homes in Carms. I shoudl thin the Pontiets/Carms bus goes on this route don't know how often

Brynmefys is a prime example of how a council neglects its duty of care to people who pay their wages. The remaining residents have worked hard and continue to do so to buy their homes. Yes, they own them. What would their plots be worth to the council or the developers? Probably 10 times the paltry amount they have been offered. How do the developers propose to work around the remaining residents? Will they ensure clean air and that their homes remain dust free? Will they make it a priority to renew the pavements, which as they stand are prime for a claim against the council. What of the hall which has been neglected by both rural and county councils? This prime piece of land is a cash cow and the execs can smell the money. It isn't quite clear where these affordable new homes for local people will appear you see, they say that they could be in Brynmefys but they don't have to be as long as they are SOMEWHERE in the county then all is well. How the local comic can print the stuff they get from ex comic staff at county hall is beyond me. Don't reporters leave the office these days and talk to real people or are we now content to accept the word of the play station generation? In the words of mr. Holmes 'There is trouble afoot' and it needs intelligent investigation. I wouldn't hold my breath as long as the pigs in the troughs are feeding.