What has Labour done for the Rhondda?

If you haven't seen it, take a look at this short film report produced by the Guardian newspaper.

With only a day of campaigning in Scotland left we have just lived through one of the most remarkable weeks in the history of Britain for many, many years. Nobody knows how it will end, but one of the things the campaign has done despite massively biased media coverage, is to expose the huge gulf which separates the understanding and experiences of communities in different parts of these islands.

A few days ago No supporters staged a big rally in Trafalgar Square in London. The main speakers were Bob Geldof and the comedians Eddie Izzard and Al Murray, once 'edgy' and radical figures turned rich members of the establishment. 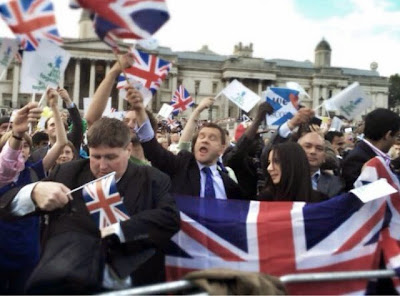 Izzard's CBE will soon be in the post, and having received a knighthood already, Geldof must surely be in line for a peerage. How they think that they can win over the Scots by standing in Trafalgar Square in their Gucci shoes waving union jacks is a mystery.


Travel a few miles from there to Essex where the Clacton by-election campaign has kicked off, and once again for people in Wales, Scotland, Northern Ireland and parts of northern England we could be on a different planet.

Head south-west from Essex to Surrey and Sussex as I did last year, and you are in a world of expensive gastro-pubs, private schools and wall-to-wall Chelsea tractors. If they think of Wales at all it is as a destination for mini-breaks in holiday cottages, boutique hotels and adventure sports - the sort of thing you can see in the Sunday travel supplements every week.

Whatever we wake up to on the 19th of September, we can be sure that no amount of jubilees, Hyde Park concerts and Team GB events will ever put this Humpty Dumpty back together again.

[Thanks to BlogMenai for the shamlessly copied Trafalgar Square picture]
Posted by Cneifiwr at 07:31

I listened to the interviews last night and I have to say that Gordon Brown came across very well.

Mr Salmond appeared to be hiding things. He still cant explain about the currency and the more the campaigns go on the more uncertainty there is over pensions, currency jobs etc.

I wouldn't vote for separation if I were a scot and there is no appetite here for the same.

The Tories, Labour and LibDems couldn't even deliver reform of the House of Lords or agree on constituency boundary changes. How do you expect them to come up with the deep constitutional and economic change needed to rebuild the UK? The Tories are already in revolt over this.

John Redwood is not the Tory party but at the end of the day he is right in what he says.

If more powers are devolved to the nations why shouldn't England have the same.

Why should Welsh and Scottish MPs vote on issues in Parliament that do not affect them like health policy etc.

Love him or hate him but he is right !

I despise John Redwood but even he can make sense sometimes.

Some English counties have larger populations than Northern Ireland ...

I agree with the last two comments. The irony is that it was Redwood's great heroine who kicked off the process which will sooner or later bring about the end of the UK. Yes, we are talking about Mrs T.

Unlike villages in Scotland, Rhondda people have never been given the opportunity to decide their own fate.
Except in Maerdy..
http://www.youtube.com/watch?v=Zmu-rnDWOD0
Rather be Argentinean than British.
Viva Erscosia.