If last week's marathon 5 hour extraordinary council meeting wasn't enough, you can settle down to another council webcast this coming Friday. Among the items which could spark some interesting debate is a Plaid motion calling on the Executive Board to freeze its plans to ramp up charges for sports facilities.

Unless the Executive Board pulls a rabbit out of the hat, the public response, particularly in the south of the county, should have Labour and Independent councillors wondering what this will do for their chances of re-election.

Kevin Madge and Colin Evans have both been adamant that this policy is all about fairness, creating a level playing field and neutralising the cost of maintaining sports grounds.

As listeners to Taro'r Post heard the other week, the rugby and soccer teams in Tumble are being asked to stump up £1,000 a week for the use of the council-owned grounds. Unless Mark James is personally mowing the grass, it is hard to see how those charges were arrived at.

The reaction on Twitter is just as heated. Absolutely disgusted just about sums it up, and this graphic has been making an appearance: 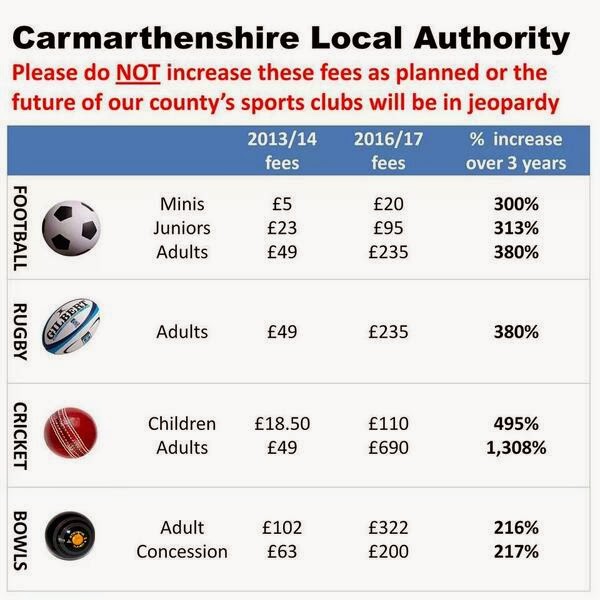 Also up for discussion is that perennial favourite - senior officer pay. With what Cllr Cefin Campbell (Plaid) described last week as "the top monkey in this place" currently resting at home on full salary of around £14,000 a month for what may turn out to be a very long holiday indeed, a lively discussion can be expected.

The report up before the councillors notes that:

The Council does not permit an employee occupying any post on the Council’s agreed establishment to be paid other than via the Council’s payroll.

Does that mean that the chief executive's remuneration as returning officer in e.g. Assembly or Westminster elections is paid through the payroll? Or how about his appointment as Non-Executive Director of the Assembly?

It would seem that there are exceptions to the rule. 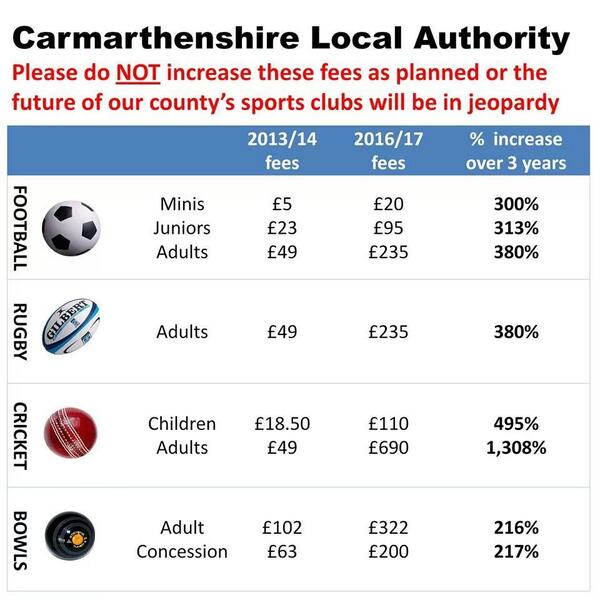 On Radio 4 today they discussed how the average council tax in England is less than 1%.

We have also heard that Wales' GDP is circa 75% of the rest of the U.K. and that we have some of the poorest communities in Britain.

We have crumbling roads, pot holes all over our highways. There is also litter and refuse strewn all around many of our streets.

Why then do we have some of the highest paid senior council officers? Surely if they were paid by results they'd all be paupers.

There are clubs folding at the moment due to these fee hikes. It's worth pointing out that some clubs are lucky in that they own their pitches but when they have no one else to play against that will be moot.

I've seen that graphic before, it's very good. I'd be interested to know who made it.

Maybe cricket will get some funding from a Council sub-company.
You never know .

What time is the WEB CAST on FRIDAY please ????

don't tell me i have to go back to carmarthen?

if someone dares to ask the question, even to satisfy the curiosity, if the cuts are actually legal or enforceable. as before, grants and subsidies are bursary, and most of them are non repayable. unless there is something in the application which stipulates a subsidy has got to be repaid.

another question must be asked... what grants are actually available that the council cannot access?

if anyone takes some short time to view sportswales lotto for example, let me know what is available to an existing club :)

The graphic appears to obscuring the last part of the post.

Thanks Anon. The Blogger software is a nightmare at times, and does all sorts of unexpected things to formatting. I have tried to insert some more spaces beneath the graphic in the hope that it works.

It does look OK on my screen, but short of deleting it and starting again, I'm not sure what else can be done.

And what about the elaborate leisure centre facilities in TRIMSARAN? Are these facing cuts or an uncertain future?
I guess that Mrs Chippings will ensure the survival of this place, despite the fact that both Llanelli and Carmarthen also have leisure centres.
It's alright for some......

According to councilor Anthonty Jones that is the going
Rate in London for executives,but I thought we lived in
Carmarthenshire?

Cllr Cefin Campbell should be ashamed of the comment he made about the CE. It was insulting and a comment that you would expect children to say on a playground. Certainly not a comment you would hear a County Cllr say. If I was him I'd be extremely embarrassed and be issuing a public apology.

If you feel what he said was wrong report him to his council's monitoring officer - please!

What came out today Cllr Peter Hughes Griffiths held a meeting with sports Clubs in Llanell area why as he lives in Carmarthen so what about the Sport Clubs in the Carmarthen area , who speaks up for them what was said today also 60 clubs had money 60 clubs had nothing and one club had a lot , and we all know who that is.. !!!!!