The Big Lottery Fund and a community newspaper

Syniadau reports here on the decision by the Big Lottery Fund to turn down an application for a small grant from the Welsh community newspaper Y Gloran for funds to upgrade its publishing software on the grounds that the newspaper, which serves the Rhondda, is published in Welsh only.

For readers not familiar with the papurau bro, these are for the most part monthly newspapers run by volunteers which serve small, defined areas. Typically they contain news on local community events; they report that Mrs E. is recovering well from an operation, that Mr W. has been taken ill and that somebody else has graduated from university. They may contain a recipe or two, and usually feature a couple of longer articles on cultural matters or the interests of their contributors, and are funded partly by the cover price and partly by advertising from local tradespeople and businesses.

Like all local newspapers, the papurau bro are facing difficult times as their readership grows older and advertising is harder to come by, but they play an important role in keeping communities together and promoting the use of Welsh.

The Big Lottery Fund justified its decision on the grounds of inclusivity. A local newspaper published in Welsh excludes people who cannot read Welsh and are not prepared to make any effort to learn it. The BLF says that its terms and conditions stipulate that projects which receive funding in Wales must make make provision for both languages.

It didn't take Syniadau very long to find an example of a project which does not appear to meet the BLF's terms, and there are undoubtedly many more. Here's another.

Towy Community Church is receiving £800,000 from the Big Lottery Fund and Welsh Assembly Government towards its bowling alley, debt counselling, etc., etc. project. See if you can find any Welsh on the website which describes the project. Presumably no such strings are attached to the almost £1.5 million funding package being provided by the County Council, which claims in its glossy Improvement Plan that one of its aims is to ensure the promotion of the Welsh language and culture.

And when it comes to inclusivity, you have to wonder just how inclusive an organisation is which says that anyone not signing up to its beliefs faces "eternal conscious punishment" (a slightly nicer way of saying that we will burn in Hell for all eternity).

£800,000 of funding would have kept all of the papurau bro in Wales going for a very long time indeed, of course, if not quite for all eternity.

The Big Lottery Fund and its close relation, the Heritage Lottery Fund, help very many worthwhile causes, but you have to wonder whether their grip on the projects they fund is any better than it was when the Welsh Government and BLF were dishing out £7.1 million to Awema.

As Cneifiwr ponders these questions, he can see another project which received generous support from the Heritage Lottery Fund, known affectionately to locals as the Giant Phallus of Newcastle Emlyn. At least it's a bilingual phallus, though. 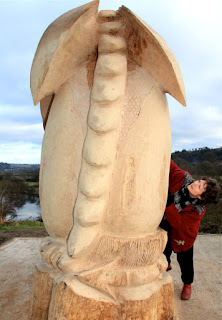 This should be in council chamber, at least it has what appears to be a spine....