Something Nasty in the Wood Shed

The swallows have headed back to warmer climes; the kids are back at school; the shoplifters who keep local supermarket security staff busy have gone back to Walthamstow, Brum and Manchester; and Julian and Henrietta have loaded up the Range Rover, locked up the holiday home in Newport (Tudrath) and returned to Hampstead for the winter.

Not so the resident population of lesser spotted bloggers in Carmarthenshire and Pembrokeshire who spend their time rummaging through mouldering mounds of council documents in search of a tasty morsel or two. Currently they are in a feeding frenzy, having sniffed something which smells remarkably like rotting flesh emanating from the county halls in Carmarthen and Haverfordwest.

Can Cneifiwr resist the temptation to join in? Of course not.

What has got Caebrwyn, Old Grumpy and Jacob Williams sitting up and sniffing the wind is the long-running saga of huge EU funded grants dished out by Carmarthenshire County Council for schemes which were perhaps less about creating jobs, jobs, jobs for the many, and rather more about replenishing the bank accounts of a favoured few.

This blog first poked around in this particular wood shed back in 2014 (see Meryl's Millions here and here), and the press took a fleeting interest, only to be told that everything was absolutely fine and that there was nothing to see.

Here was the then deputy chief executive of Carmarthenshire, Dave Gilbert OBE, giving a master class in spin to the Western Mail in September 2014. His message boiled down to this:
The fact that the council and the WAO were still locking horns over the grants a year later, as is evident from Grant Panel minutes, suggests that Mr Gilbert was a little premature in making the first of these claims.

In March 2016, 18 months after Mr Gilbert told Shipton of the Mail that a working group was to be set up, Carmarthenshire Council Council's Grants Panel (more about this body in a moment) announced in minutes buried deep in the minutes of the council's Audit Committee that there was after all no need to set up a working group because WEFO (the Wales European Funding Office) had taken EU third party grant funding programmes away from Carmarthen:


"It was intended that a working group be set up to review the current third party grants process and to implement improvements. However, the Authority will no longer be administrating third party grants via European Funded Projects. These will be managed by Intermediary Bodies that have been approved by WEFO (WG, WCVA, DEST & SHELL)."
http://democracy.carmarthenshire.gov.wales/documents/s7222/Minutes.pdf
But it is the third of Mr Gilbert's claims which leave connoisseurs of spin gasping in admiration. The truth was that some senior figures in the council (the Director of Resources and a senior councillor) were so alarmed by what Meryl Gravell was up to that they had asked the WAO to take a closer look.

As Caebrwyn has noted on her blog, the idea that Carmarthenshire County Council would proactively go to the despised WAO in an exercise in self-improvement is comedy gold.

The Grants Panel itself is a no-go zone for our elected councillors. Requests from the Audit Committee to be allowed to send along its chair began while Plaid was still in opposition, and it took the Head of Law two years of agonised sleepless nights to conclude that the request was inadmissible.

Heaven forbid that anyone should get the idea that old accusations that Carmarthenshire County Council is officer-led are still valid, but scrutiny of a body responsible for handing out millions of pounds in grants is clearly not something for our elected representatives to worry their little heads about.

It may or may not be legally inadmissible, but politically allowing busybody councillors to go sniffing around her grant awards is the last thing that Meryl wants, and as she holds the balance of power between Labour and Plaid, it ain't going to happen. Besides which, Labour will want to tread very carefully because just about all of the bodies were buried on their watch.

Strangely, given the seriousness of concerns about grant awards, meetings of the Grants Panel invariably record that senior officers invited to take part in their meetings, including Chris Moore, the new-ish Director of Resources, never show up. Anyone with a suspicious mind might think they wanted to keep everything at arm's length for some reason.

Meanwhile, Old Grumpy has been doing his level best to try to dig into one of the grants approved in Carmarthen for an office block in Johnston in Pembrokeshire. A planned visit to County Hall in Carmarthen by Old Grumpy chaperoned by a council officer from Haverfordwest was vetoed, presumably by someone not a million miles from Mark James.

As Old Grumpy notes in his laconic way, if he were a conspiracy theorist, he might think that someone was trying to hide something.

The horse having galloped off into the sunset, the Wales Audit Office has decided to re-examine its stabling arrangements and change its approach to audits of this kind in future, placing greater weight on "outcomes". This would presumably mean that Meryl, Kevin Madge and others would no longer be able to claim that they had created huge numbers of jobs, safe in the knowledge that nobody could ever prove otherwise.

In reality, Brexit will mean that it is highly unlikely that there will be any more grant schemes for job creation schemes, genuine or otherwise.

Back at the ranch, attempts to get to the bottom of what happened in Crosshands, Johnston and elsewhere are continuing. As lesser spotted bloggers can testify, a useful sign for anyone interested in digging for old corpses in Carmarthenshire at least is old press releases announcing the presence at the scene of Meryl and her old friend Edwina Hart with large cheques in their handbags.

Here's a press release snapshot from March this year taken at Delta Lakes, for example: 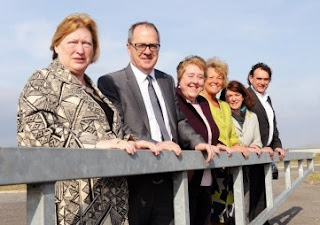 This one is set to run and run.

The ERDF funded Collaborative Communities project had a grant scheme as part of it. Collab Comms was a joint project between CCC, PCC, SCC, NPT and the county voluntary councils for each of those areas. My experience of that was that the minor community officers in each of the local authorities who worked on that project worked together against the cvc's to make sure that they pulled in most grants. Petty rivalry rather than outright corruption. On one particular occasion though a much bigger fish of an officer was sent to a meeting to ensure that a pet project of Meryl G's got approved. Lowly officers are quite happy to support their line managers though and their Cabinet Members.....it keeps them in their job and they get remembered for future opportunities. This is the same everywhere, the corruption is down to the politician using their position.
The PDF was a consortium of the same councils with CCC as the lead body and thus responsible for the outputs and finance for all the 4 local authorities. The PDF project was designed by all 4 local authorities and managed by all 4 local authorities.
The petty rivalries of officers in each local authority much lower down the tree than your Dave Gilberts were a problem with this one too, and each l a's rivalries higher up each of their seperate trees as they jostled for power and pieces of the pie around the PDF but also for their individual places in an increasingly important regional playground. This way of operating should not be underestimated as a major structural problem and a major contributor to the issues surrounding the PDF and other grants. Dave Gilbert, who is one of the honourable men in my opinion, had to deal with all those issues and trying to herd local government cats is no easier than any other sort of cat herd!

On a completely unrelated matter, I've been doing some digging in recent days into housing associations, and now I find myself following (on Twitter, let me add) someone working for Community Housing Cymru, named - Edwina O'Hart. https://twitter.com/EdwinaOHart Mildly disconcerting.