Cantref - the blood-letting begins, and a letter to the Editor

When Cantref's shareholders voted themselves into oblivion and approved the "merger" with Wales and West (WWHA) a couple of weeks ago, they did so at gun-point. It was either merge with WWHA, or go bust thanks to a secret government report produced by the London firm of Campbell Tickell, which we now know enjoyed some unusually close links to WWHA.

As a last minute sop to wavering shareholders, vague promises were made that Cantref's Newcastle Emlyn headquarters would remain in some shape or form, and that the Welsh language would be safeguarded.

At the time, this blog wondered what mechanisms were in place to ensure that these promises were kept and who would be around to hold the Cardiff-based housing giant to account.

We have not had to wait long to find out that the promises had a shelf life equivalent to that of the proverbial snowball in hell.

Cantref's ICT manager, two senior housing managers and others are understood to have received letters informing them that their jobs no longer exist, although they could stay in work if they up sticks and move to Cardiff or Flint.

HR interviews have been conducted in English, and WWHA is said to be looking for smaller premises to house what is left of its staff in Newcastle Emlyn.

Letter to the Editor

It is fair to say that you would be hard put to find many supporters of WWHA in Ceredigion or the rest of Cantref's patch, so readers of the Cambrian News would have been surprised this week to read a letter to the Editor from a WWHA supporter with an address in Llanarth.

I have been a close observer of WWHA for 20-plus years and can confirm that, on most performance indicators, it is the best performing HA in Wales (It is also the largest).

He goes on to claim that,

If the merger does indeed proceed, Cantref tenants will, I have no doubt, be well served. The tenant voice will have an opportunity to be heard, and both responsive and planned maintenance will be undertaken in a timely manner. It is to my knowledge that WWHA has had a language policy in place for many years and business can be conducted “yn yr hen iaith”.

Judging from the garbled nonsense on WWHA's website, the language policy consists of cut and paste into Google Translate. The result is Yr Hen Iaith on drugs:

So who is this Llanarth resident who has been observing distant WWHA for 20 years and more?

Byron Butler, it turns out, has a holiday home in Llanarth and is more often to be found in Bridgend. A retired butcher and prominent freemason, the Worshipful Brother Butler is one of those local government dignitaries who in the good old days would have dressed up in fur trimmed velvet robes (when not posing in funny aprons), his girth expanding with every passing year, as he gradually amassed municipal bling and  honours. 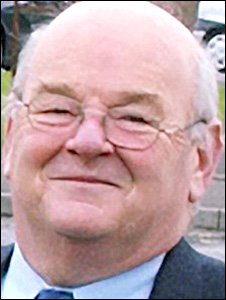 In 2007 he was appointed Deputy Lord Lieutenant of Mid Glamorgan after serving as High Sheriff, and when not down at the Lodge could be found dispensing justice to miscreants in the Magistrates Court.

The title of Deputy Lord Lieutenant is awarded for life, and it was a little unfortunate that a year later our Worshipful Brother found himself in hot water for remarks made in an episode of the BBC's Week In Week Out documentary series called "The Only Gay in the Village" when he was interviewed by former Steps singer, Ian "H" Watkins.


Talking about gay people, Butler said, "We haven't got much time for them...Well, I think probably it's a suspicion of the mainstream that they perhaps will interfere with young people and so on and that's historically been the case."

"Paedophiles, solidophiles [sic], not necessarily, but they do, don't they. That's the reality."

A year later, just as he was about to face disciplinary action after an investigation by the Office for Judicial Complaints, Butler decided to resign as JP, thereby depriving the bench of his enlightened views.

Butler is a regular at a Christian place of worship in his home town, and he probably drew some comfort from support he received during his suspension, including a press release from those Carmarthen-based nutjobs, Christian Voice, which called on the authorities to end "this witchhunt of an innocent man".

Fortunately, Butler was able to carry on in various other posts, including as a trustee of the Slocombe Cottages for the Aged and Infirm, a registered charity which is run out of WWHA's headquarters in Cardiff.

Perhaps next time Mr Butler will be a little more open with readers of the Cambrian News about the extent of his links to WWHA.

The Editor never tires of pointing out that this blog is read in many a manse and other respectable homes. Readers looking for adult content in the pursuit of unusual fetishes are politely directed elsewhere.

In response to some of the comments below, the Y Cneifiwr wishes to emphasise that the following image is reproduced for cheap laughs only. 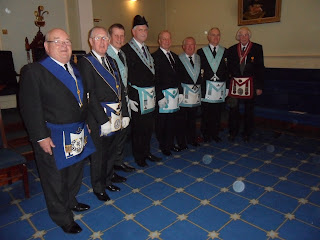 What constitute a prominent freemason and why are the aprons funny?

It all very well mocking such things but that only serves to dilute your argument and encourage criticism from people who otherwise might support your cause.

Please don't stoop to such petty mindedness; you can present a good argument without that.

And for information, freemasons are one of the largest financial donators to charities in the UK, yet this goes largely unnoticed. Please don't mock what you don't know much about. Fine, shoot the individual, but not the society.

Where to begin in response to that....

Firstly, to be fair, the Bridgend Lodge is unusually open and transparent. Lots of pictures and reports available to anyone. Secondly, I know that the masons raise a lot of money for charity, but so do lots of other groups and individuals. You don't need to be a mason to donate money to charity.

The masons have been around for a very long time, and I am not naive enough to think that they are about to disappear any time soon.

However, there is something disturbing and anachronistic in the 21st century about a society which is open to men only (and overwhelmingly white men in middle and late middle age) drawn very largely from a pretty narrow cross section of society. Senior police officers, magistrates, businessmen, clergy....Clearly, the masons see themselves, with some justification given their membership, as the backbone of society, even though they are increasingly unrepresentative of the world we live in.

But it's a free(-ish) society, and if grown men want to join and put on aprons, that's their right.

That does not mean that groups like this should be immune to criticism. Butler plays a very prominent role in the lodge, despite his well-known antediluvian and repugnant views.

Social attitudes have, mercifully, changed a lot in the last 50 years. A close friend of my parents is a prominent mason, and one of his sons, now in middle age, has been happily and openly living with his same sex partner for years. It is really refreshing to see how my parents and their friends, all in their late 70s and 80s, have accepted J's sexuality. 30 or 40 years ago, their response would have been very different.

As for Butler, the combination of religion, honours (a representative of the monarchy, no less),engagement in public life and repulsive social views makes him fair game for a bit of ridicule.

The rolled up trouser leg is very funny, actually weird. They may donate to charities but the institution can be very harmful to some people who have been wronged and seek justice due to some serious practices by masons employed within the system. The brotherhood. Masons will support their brothers no matter what they have done. There have been many documented cases about this. It is not a healthy organisation.

Apparently they can have you 'removed' if they disagree with what you say too.

Very powerful dark forces operate within freemasonry and woe betide anyone saying anything against them. They can access anyone, anything and everything, can find out what they want and when they want and have immunity from the law too, I hear.

An organisation you really don't want to cross.

You talk absolute drivel and clearly haven't got the slightest clue what you are talking about. What is weird about freemasonry? Do you actually know what happens in freemasonry? Is the trouser leg really rolled up?

There are many examples of masons who have been expelled for breaking the law or bringing masonry into disrepute. Such behaviour is simply not tolerated.

You confuse reality with hearsay and unless you have proof positive your comments prove your ignorance. Why not give links to these documented cases you cite?

Cneifwr makes an argument and defends his rational for criticising Butler but my comments above relate to him too. If he is as bad as suggested then maybe the accusations will curtail his masonic position.

But please don't mock something you know nothing about, which, contrary to Cneifwr's assumptions consists of people from ALL walks of life.

Meanwhile have a look at this site: ugle.org.uk

@22.50 Open to people from all walks of life, perhaps, but the result is white, all male, middle to late middle age and overwhelmingly middle class. You only have to look at pictures of gatherings to see that - with an astonishing number of Church in Wales clergy taking part for some reason.

Put another way, if anyone were to do a survey of membership newspaper reading habits, I don't think the Guardian would feature prominently.

Instead of this trivial about the fact this chap is a Free Mason should the dialogue be the fact that this housing association will not respect the ethos of Cantref namely protecting the rural welsh speaking community . Should we not be examining why a Cardiff centred labour government allowed this acquisition w hen the offer by Carmarthenshire County Council to take over and protect the welsh language ethos was ignored.

The argument about freemasonry is all very entertaining, but the fact is that Mr Butler never disclosed that he was the trustee of a charity that shares offices with WWHA and he does not reside in Llanarth on other than a casual basis.

I think that is the point of the article. Perhaps someone would care to comment on how and why he felt moved to write a letter, the effect of which was to deceive - despite being written, no doubt, from the purest and best of motives.

You have hit the nail on the head, Cadno, as indeed did Anon (12 September).

After Anon's comment came in, I re-read the piece because I could not remember making a big deal of Butler's freemasonry and was beginning to doubt my sanity. All I found was a passing reference to the fact that he is a prominent mason in Bridgend (true) and a little joke about wearing aprons.

Clearly that was too much for some hyper-sensitive souls.

The true scandal here is the underhand way in which the takeover has been brought about, and Mr Butler's disingenuous letter is of a piece with what has gone on.