A reader writes,  "I thought that I should mention that back in about 1960, there were some (two I think) railway coaches hitched together sideways, to form a bungalow, which were on the opposite side of the road and in close proximity to Penllwyngwyn Farm.  When travelling on the bus from Pontarddulais to  Llanelli, the bus conductor always shouted out "Swindon" when approaching the railway carriages".

As readers may be aware, Dai Lloyd's recent attempt to give a measure of protection to historical place names was vetoed by the Labour Party, with Ken Skates, Cabinet Secretary for the Economy and Infrastructure, declaring that the proposals were "premature".

Meanwhile, cultural vandalism continues unabated, with ancient farms, cottages and even geographical features being given twee new names. One example brought to Cneifiwr's attention is Pencraig in Llangoedmor, Ceredigion, a former farm now converted into holiday cottages which was recently re-named "Owl Farm".

Pencraig is by no stretch of the imagination difficult to pronounce even if you don't know a single word of Welsh, and there is even a small eponymous village over the border in Herefordshire which has somehow survived through the centuries with its name unmolested.

Perhaps it is time we renamed Ken Skates.

Now reports have come in from Llangennech (yes, afraid so) where Gary Poumista Jones, one of Labour's two candidates for the county council, is complaining that Plaid has blocked attempts to have a lane named "Heol Swindon". 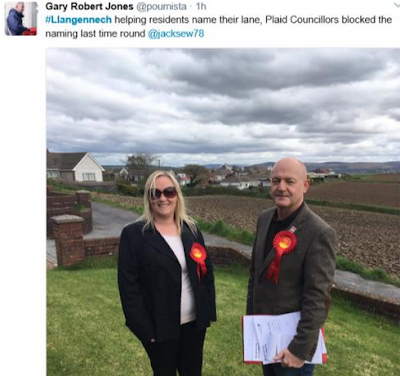 A little known fact about Swindon, the rather unscenic English railway town, is that you can usually pick up Radio Cymru there - in fact the reception is better than in parts of Ceredigion. It was also the birthplace of Diana Dors.

Unfairly or not, Swindon has acquired a reputation for being a rather drab sort of place, and so why anyone would want to name a lane in a Welsh village "Heol Swindon" is a mystery.

And it's not the only mystery because the lane in question is known as Heol Penllwyngwyn, which is also the name of the adjacent main road. As far as the Royal Mail and the County Council are concerned, the address of all the properties along the lane (post code SA14 9UG) is Heol Penllwyngwyn, and the council's planning department has said it has received no applications to have the name of the lane changed.

The two current county councillors for Llangennech also say that nobody has ever raised the matter with them, and they have never blocked any proposal to change the name of the road.

Purely by coincidence, there is a very popular pub close to Llangoedmor called Y Penllwyndu, next to a crossroads where in days gone by rogues and vagabonds would be strung up, a fact commemorated on the pub's famous sign.

Fortunately the worst that can happen to Gary Poumista Jones is that voters will send him off with a resounding raspberry.

Llanelli boring ? They are the mad hatters of all mad hatters . The party further west are more dignfied up that end . Llanelli is ruled by the nasty few and they are continually throwing mud at others and bare faced lies . They cant play clean dirty here !