Nominations for the county council elections closed on 4 April (see full list here), and the campaign is now officially underway.

Unlike 2012 when every single ward was contested, four of the 74 councillors have been returned unopposed this time round. They are:


All three were sitting councillors, so no change.

In Llanddarog Ann Davies has been returned unopposed for Plaid. She takes over from veteran Independent Wyn Evans.

Pig in a poke

Some voters going to the polls on 4 May will be presented with an even more bewildering array of independents than usual following a cock-up by Siân Caiach's People First which did not manage to register as a political group in time. As a result, People First candidates will show up as independents on the ballot paper, meaning that voters in a number of wards will be asked to pick and chose between three different types of independent:

There is no way that voters can tell which is which by looking at the ballot paper, making votes for independent candidates even more of a stab in the dark than usual.

In Glanaman Labour has hit on the novel approach of nominating someone called David Jenkins to stand against the sitting Plaid councillor David Jenkins.

The council's chief executive, Mark James, will as usual earn a hefty fee for conducting the elections, and may already have banked the winnings (in 2012 he paid himself £20,000 before nominations had even closed).

Perhaps he was too busy counting the money to notice that a couple of candidates listed had rather unusual names. Standing against Tegwen Devichand in Dafen is Mr Rob Evans Paramedic (Independent), while over in Llangeler we have a candidate who could have come straight out of Monty Python's Very Silly Party called John-y-Gof Wigley Bee Keeper (Independent). 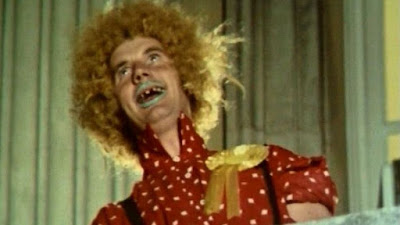 Staying with the Very Silly Party, one of the unusual features of the Carmarthenshire list is the relatively high number of UKIP candidates standing. The party is fielding just 80 candidates across the 22 local authorities in Wales, and they have found only one candidate willing to stand in the Rhondda, one of their supposed strongholds.

In Ceredigion the sole UKIP councillor, Gethin James (Aberporth), has come over all shy and has decided that his best hope is to stand as an independent - a good illustration of the sort of thing which may lurk behind that innocuous label.

Carmarthenshire is hosting no fewer than 12 UKIP candidates, even more remarkable when you consider that the party has been imploding while nominations have been open. Having lost Douglas Carswell as their only MP, it seems they are now about to lose one of their AMs, Mark Reckless. Another, Michelle Brown, is facing deselection, and Nathan Gill, the party's "Welsh leader", now sits as an independent.

Meanwhile the party is facing financial armageddon, and its executive director in Brussels has just resigned, leaving a growing pile of unpaid bills.

A quick glance at the list of UKIP candidates shows that they seem to be made up for the most part of a mix of white flight nutjobs who have settled here to recreate a little piece of England, elderly disenchanted Labour voters and Ken Rees, Llanelli's former LibDem councillor.

Unsurprisingly, the Kippers are mostly concentrated around Llanelli and Ammanford, and they include Richard Hart, who runs something called The Golden Spirit Centre from a smallholding near Maesybont.

Standing for UKIP in Betws is Krishna Seunarine, who appears previously to have stood for parliament as a UKIP candidate in Glenrothes, Scotland.

What do you mean "Unsurprisingly, the Kippers are mostly concentrated around Llanelli and Ammanford"? Take that back!

I spoke to one of the "UKIP" candidates last weekend, who actually was doing a leaflet drop door-to-door, when we've not seen hide nor hair of the incumbents in our part of the Ward for years! I don't know why but I did ask if he was standing again as an independent, but got the surprise answer that he was under UKIP (though not obvious skimming his A5 flyer). That's a shame. Whilst I want someone (anyone?!) that will represent us better, behave decently and hold govern diligently, I can't/won't vote for a UKIP candidate.

The Ward pdf's from the Council's site are "interesting". I notice under council owned in Ammanford, Ysgol Dyffryn Aman is still called Amman Valley Comprehensive, despite officially changing from that name in the 1990's. In Llandybie they call out Glanmarlais Care Home, closed by the council in 2015, but set to reopen in 2018 under a private operator with the Council supporting the grant applications.

We have 1 ukip . Laughable really he always stood in lleidi as a lib dem . I cant see him getting anywhere . But it does make you think why now ?

“Here in Bangor, change is happening fast. Bangor has turned a curve and is facing the future in the right direction. I want to carry on as a councillor, to see these developments through and continue making sure that these changes benefit everyone in our community. My absolute priority for Bangor is to ensure that we form and support new communities in our city centre and that as a city we continue to be innovative and outward facing.”

But now he’s turned up as their candidate for Cydweli. I can understand why he originally defected from the Labour Party to the Greens, but why is he so ashamed that he’s had to move to the other end of Wales? Just a bit offside!

Cneifiwr can we have a profile of the UKIPers please, we need a laugh