A week has now gone by since the Hamiltons' outing to Llangennech, and if anything the fallout is intensifying.

Attention has now turned to Lee Waters AM who is facing scrutiny for his role in the whole Llangennech saga. What did he know? What has been his relationship with the group running the school campaign, and what has he said and done?

Fortunately, thanks to public pronouncements and social media, we know quite a lot about Lee Waters' role in all of this, and we can say for certainty that his involvement goes back a long way.

Back in August 2016, this blog wrote an open letter to Lee Waters asking him to show real, decisive leadership. Needless to say, the letter did not receive a reply.

Two things were happening at the time. First, the Labour leadership contest between Jeremy Corbyn and Owen Smith was in full swing. Waters backed Smith, as did Nia Griffith, which can't have gone down well with many of the movers and shakers in the Llanelli Labour Party, not to mention people like Michaela Beddows who had joined to support Corbyn, despite holding views which he would find completely repugnant.

Whenever there is a row in Llanelli, you can be sure that Tegwen Devichand will be close by, and Cneifiwr noted her less than whole-hearted support for her MP:

Taking up her knitting and her seat in the viewing area at the foot of the guillotine, Tegwen Devichand told the Carmarthenshire Herald this week that, "Nia is entitled to her opinion. When it comes to re-election, if people want to re-elect her, only time will tell".

Meanwhile, Lee Waters was writing about the virtues of what he called "Leadership".

At the same time as war was raging in the Labour Party, the Llangennech school campaign was in full swing, and it was already clear that the campaigners had developed close bonds with some very extreme elements. As this blog noted earlier this week, Tegwen Devichand shipped up outside the school in Llangennech at a very early stage, even though Llangennech is not on her patch.

Demonstrating what he meant by "Leadership", Lee Waters' response to the school campaign was first to keep a very, very low profile. But then, at the end of July 2016, he came out with what he said was his first public pronouncement on the issue. That suggests that behind the scenes discussions had been going on for some time.

Showing yet more "Leadership", Waters sided with the campaigners while claiming that he supported his government's policy on extending Welsh medium education, a stance which would leave the policies being pursued by Alun Davies and Carwyn Jones dead in the water.

Lee Waters had decided that the best approach would be to ride the tiger of intolerance and ignorance in the hope of picking up a few more votes, while keeping his fingers crossed that the tiger would not turn on him.

It is clear that Lee Waters has maintained close links to the Llangennech campaigners. Nobody would accuse Waters of being lacking in grey matter. Was he really unaware, with his background, that they held views and were consorting with extremists diametrically opposed to the values the Labour Party is supposed to stand for?

The ties between Waters and the campaign group have continued right up to the present, as this leaked very recent exchange from a closed Facebook group shows: 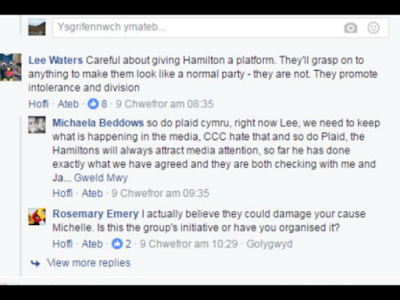 Waters was aware that the Hamiltons were being invited to Llangennech, and he knew that Beddows and Jacqueline Seward, both Labour Party members, had taken the lead in arranging the visit and the PR.

The visit involved other Labour members and activists as well, as we know from a wealth of photographic evidence.

Once again, Waters showed what he means by "Leadership".

Instead of saying, "this visit must be cancelled, and under no circumstances must any member of the Labour Party associate themselves with it. In fact, by liaising with UKIP, you have broken party rules and must now face disciplinary proceedings", Lee's response was "be careful".

Neil Hamilton must be chuckling away to himself as he tucks into his full English in Wiltshire.

Labour in England are facing an existential challenge due to its leadership and Brexit woes.

Whilst they are desperately defending seats at Stoke and Copeland, here in Wales, we see Labour Party members in Llangennech openly cooperating with UKIP. They have clearly given the UKIP leader, Neil Hamilton an excellent opportunity to raise his party's profile before the forthcoming May elections.

The Labour Party in Llanelli have clearly been, at best complacent or worst, complicit with their involvement in the fiasco.

Sadly, the party of Jim Griffiths is not what it used to be!

As I have been mentioned here I will respond. That has been taken from the Llangennech School campaign group to which everyone is eligible to join so not a secret society. The only reason it is closed is because some more extreme people who cannot engage in a debate without being abusive were making it their home. What I would also point out is that you have seemed to have cropped the reply to my question where Michaela
said it was her who had organised it. I am happy for my remarks to stand. You carry on and make what you want of them including the conspiracy theory that it was Llanelli Labour and Llangennech Labour who colluded in bringing the toxic UKIP down here. Nothing could be further from the truth and despite giving advice in good faith that it could do a lot of damage it is not up to us to what an individual decides to do. It is still a free Country.

While Michaela and Jacgueline hobnob with UKIP in Llangennech,
Lee dawdles and Labour squirms!

It Lee Waters as Director of the IWA who arranged the infamous debate on the European referendum between Carwyn Jones and Nigel Farage mainly to boost Labour's electoral chances in last May's election that saw the First Minister badly beaten by Farage and put the Welsh Remain campaign on the back foot for the remainder of the campaign.

The same could be said with what's going on in Llangennech, Lee's intervention is all for Labour party advantage in elections, i hope it backfires on him and his sordid party.

I am pleased to confirm that screenshots show that you contributed to the discussion with Michaela Beddows, as did a UKIP activist based in Neath.

I can also confirm that you expressed strong reservations about inviting Hamilton, although as someone who is extremely active in the Labour Party, it was odd that you did not point out to her that she was in breach of your party's rules and was bringing the party into disrepute.

As you also know, Jacqueline Seward, your party's candidate in Llangennech, was named in the same conversation as being actively involved in setting up the UKIP visit. There is unfinished business there.

The reason why you and the UKIP activist were cropped out of the picture was that, with respect, neither of you holds elected office or is a household name, and you only really repeated what Lee Waters had already said.

Thanks for your reply Cneifiwr. On your firsr point of me accusing another member of breaking Labour Party rules. Had I done so, I probably would have been breaking rules myself by doing it on a pubic platform. There is a protocol to follow which is probably the same in all political parties. As far as your final comment is concerned, I really have no interest in massaging my own ego by appearing on your blog and am very happy that I am not a household name - the point I was trying to make was that in the reply she confirmed that it was an individual choice to invite UKIP and had nothing to do with either Llangennech Labour or Llanelli CLP which damages your assertion that it did. I also appreciate that you will probably not accept this. I am, however, grateful that a fair proportion of the local Plaid Cymru party have not taken advantage as they have enough knowledge and common sense to separate 'the wheat from the chaff' Generally we have a respectful relationship with them realising that Community comes before party politics. At the moment I am sure that both parties are more concerned about our local DWP office being closed at the moment.

We could go on like this all day and all night, but it seems to me that you are trying to spin what has happened. At least two members of your CLP were involved, and both you and Lee Waters knew what they were up to. Did you make a complaint to party officers that members were collaborating with UKIP?

Also, you are a highly active member of the Labour Party. You clearly knew the people involved, and you clearly follow(ed) them on social media. Was it acceptable for a Labour member to post EDL material?

But it goes much deeper than cwtshing up to UKIP and giving neo-Nazis a platform, as I suspect you know. There has been bullying and intimidation of other members, councillors and members of the public.

Lee Waters has a lot of explaining to do, and it looks very much as though he has left you to try to spin a way out of it. His Twitter feed today shows him out canvassing with one of the Labour councillors who is also implicated. And what do we get? Lee grinning at the camera and tweeting #topteam.

On a personal note I do not think that it is acceptable that any of our members share any extreme organisation posts whether they be far left or far right. As you say I am an extremely active member and yes I have made my feelings known about through the appropriate & proper channels. you say 'spin' I say the truth. As you say though we could go on like this all day and night so we best to draw a line under it in that we can agree to disagree. I thank you for the courtesy of your reply though.

Just to clarify for Rosemary, the protest group on Facebook was changed from closed to open on the evening that the Full Council passed the changed (18 January) by Jacqueline Seward. Therefore when Lorna Powell asked George Herbert for his comments on 10 February, it was an open group. After Neil Hamilton's visit to Llangennech, Jacqueline then changed the group back to a closed group. Odd that isn't it!? Happy Monday everyone!