Earlier this week a group of Carmarthenshire whistleblowers travelled up to Westminster to stage a peaceful protest and call for a new law to protect whistleblowers and thereby also the victims of the abuse. The campaign is called Edna's Law, named after an elderly victim of abuse in a care home run by a large private company, and a summary of what the campaigners are calling for can be found here.

Pictured below is Delyth Jenkins, the best known of the Carmarthenshire whistleblowers, and friends with two MPs who came out of the Houses of Parliament to show their support. 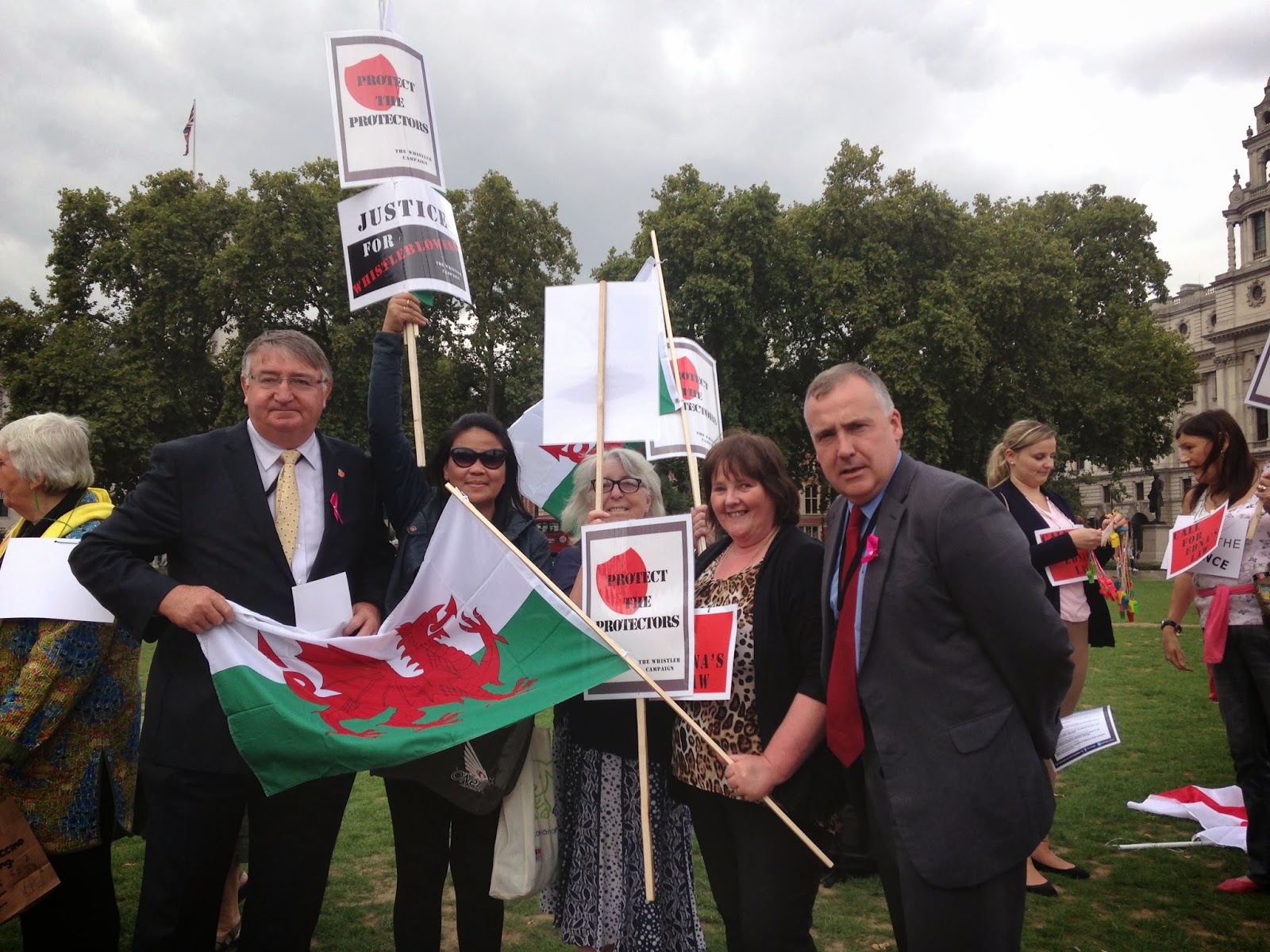 Whistleblowers exist in all walks of life. Perhaps we most often associate the term these days with social services, care homes and the health service, but a whistleblower is anyone whose conscience tells them to stand up and report something which they know to be wrong.

There are a number of cases in Carmarthenshire that this blog is aware of, and they all involve social care. Each one is different, but they appear to follow a pattern. What begins as a simple complaint that, for example, someone in the care of a home or day centre has been abused kicks off an extremely lengthy and immensely complex process which is open to manipulation. The whistleblowers then find that the machinery which is supposed to protect the victims and the whistleblowers themselves is turned against them. Sometimes they will face disciplinary procedures leading to dismissal, and perhaps further lengthy and stressful appeals to employment tribunals.

A large part of the problem is that the authority which is the subject of the complaint acts as prosecution and defence, judge and jury. Ranks close, whistleblowers find themselves frozen out and often bullied, and the abusers and those responsible for them remain in post and are even promoted.

Of course, the problem is not unique to Carmarthenshire.


This is not a party political campaign, and it is something which is in the interests of all of us. One day we may well find ourselves hoping and praying that there is someone there to help us when we are too weak to defend ourselves.

It is outrageous that in todays world of sleeze and corruption there needs to be a protest in order to get something which should be already in place. God knows we need people in the workplace who are conscientious and honourable.- how else do we stamp out serious misconduct.

However the system is geared to defend its own reputation - that means cover up at all costs whoever is hurt in the process as long as the organisation is never seen to be at fault.

It was such a privilege to meet such nice, caring people but it was very harrowing and emotional to hear accounts of the suffering - the victims, relatives and whistleblowers. The appalling treatment of whistleblowers is widespread, and not just exclusive to the NHS. The biggest problem as I see it is that of culture, and it comes from the top. Senior Managers who know what's going on but do nothing to stop it happening.

Just been watching the webcam of last weeks council meeting.
The executive board member for social care and the leader of the Council praise the outgoing Director of Social care for his services.