#daftlibel - Is the Welsh Government about to act?

A very interesting piece appeared in the Western Mail on 15 March. For those who missed it, here is a scanned copy, with apologies for the poor quality. A slightly clearer view can be obtained by clicking on the image. 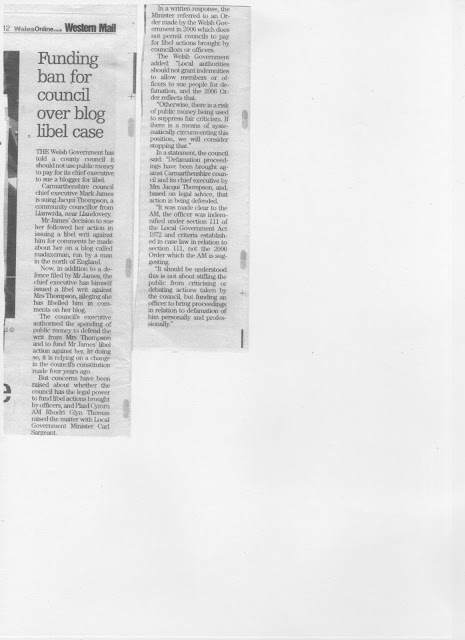 The background to this piece is questions raised by Rhodri Glyn Thomas, the Plaid Cymru Assembly Member for Carmarthen East and Dinefwr. Copies of the correspondence between Rhodri Glyn and the Minister for Local Government, Carl Sargeant, can be found on Caebrwyn's blog here.

The two letters and the Western Mail pieced together advance our understanding of the very shaky nature of the legal basis for the Council's action against blogger Jacqui Thompson.

It has also been clear for some time that the Council, unable to rely on the powers granted by the Welsh Assembly to local authorities, would fall back on Section 111 of the 1972 Local Government Act. Here is what Section 111 actually says:


Without prejudice to any powers exercisable apart from this section but subject to the
provisions of this Act and any other enactment passed before or after this Act, a local
authority shall have power to do anything (whether or not involving the expenditure,
borrowing or lending of money or the acquisition or disposal of any property or rights)
which is calculated to facilitate, or is conducive or incidental to, the discharge of any of
their functions.
This was what underpinned the R Comninos v. Bedford Borough Council case from 2003 and what Carmarthenshire is betting the shop on. A more detailed explanation of the legal background can be found on a previous post, here.
There were several features in that case which the judge pointed out were one-offs, and he added that any but the most litigious of councils should be deterred from granting indemnities to pursue defamation cases in the future. That neatly sums up where Carmarthenshire County Council has put itself.

Undeterred, and putting two fingers up to the Welsh Assembly, it is determined to soldier on.

The case, from the Council's point of view, seems now to rest entirely on Section 111 of the 1972 act. While that gives councils very considerable powers to go about performing their duties and responsibilities, it will be interesting to see what the courts make of the Council's argument that comments and criticism of the council and its chief executive made in a blog have somehow prevented the Council from going about its legitimate business.

The unnamed spokesperson for the Welsh Government told the Western Mail that if the government finds that its guidance and rules on indemnities have been "systematically circumvented", it will consider stopping the abuse. Whether it will do so in the James v. Thompson case remains to be seen, but the Welsh Government seems to be slowly hardening its position. The comments certainly will not have pleased the ruling junta in Carmarthen.
As for the junta itself, the article ends with a classic piece of Carmarthenshire County Council arrogance and contempt. You will notice that the council's spokesperson could not actually bring themselves to name Rhodri Glyn Thomas, who is just "the AM", as they set about rubbishing him and defending the decision by the council's Executive Board.

What many members of the public will not realise is that this decision to give Mr James a blank cheque was taken by a handful of people in the name of the Council under its much amended and unbalanced constitution which gives them sweeping powers without any need to put the matter to elected councillors, who have had no say at all in this.

This case raises all sorts of issues, including the way Carmarthenshire County Council is being run, the use of public money and, not least, the threat it poses to press freedom and freedom of speech. In the famous case between The Sunday Times and Derbyshire, it was said that publicly funded libel actions would have a "chilling effect" on freedom of expression.

This is not just about Jacqui's right to criticise the council on her blog. If the case goes against her, the floodgates will open, and next in the firing line will be the remnants of the local press who dare to question and criticise local government. That is one of the reasons why Rhodri Glyn has been so active in this case, the other being the issue of justice for a constituent.

As for the chilling effect, it will be interesting to see whether readers of the Carmarthen Journal will be informed about what the council is doing. Or will we get more drivel about Meryl, Madge & Co. next week as the paper wraps itself in the warm comfort blanket of conformity?

A final small strange footnote. Back in January of this year, the Western Mail reported on the delight Mr James's father felt when he heard that his son had been awarded a CBE. Nothing very surprising in that, although Mr James Senior's delight was not shared by everybody. The same piece gives us some biographical information, including a claim that Mr James is a non-executive member of the Welsh Assembly's Board of Directors.

But Mr James is not a member of that august body, which begs the question, where did the Western Mail unearth this obscure non-fact?

'The higher they rise the greater the fall' Mark James's arrogance will be his downfall!

The Bedford case cost the taxpayer £500,000. One of the reasons the judge dismissed the challenge in 2003 was that he felt, as so much time had passed. that it would be 'too financially burdensome' for the council officers to have to pay the money back. A question of shutting the stable door after the horse has bolted really.

Thanks Anon - as you say that was in 2003, and cases of this kind have not got cheaper in the intervening 9 years. Also, the Bedford case was a relatively straight-forward one-way case, whereas the James-Thompson case involves both a defence and an offensive claim. Carmarthenshire residents will almost certainly find themselves footing a much higher bill.

Mr James'statement that the council council "will be pursuing costs" against the 'Save Pantycelyn' campaign (Carmarthen Journal March 14th, Llandeilo/Llandovery/Ammanford edition, p.3)is another indication that the council has ceded excessive powers to the chief executive. In the interests of local democracy, vital for those powers to be clawed back.

i don't usually swear online but by jeez this is getting beyond normality. From the last paragraph, all i can see is pursuing a claim for having a right for calling in an application due to public interest and concern. Or am i being a tad paranoid, delusional or not thinking straight today? It is common sense that a counter claim is an offence as i pointed that out on day one. It will be interesting what mr thomas's and mr sergeant's next response will be on the sticking up the V's . Which goes onto the next precedent, isn't pursuing a claim for pantycelyn an offense action too? Would it be just pantycelyn, or does the same rule apply to all forms of protest varying from small planning apps to larger issues such windfarming?(anon2)

personally, i don't see how it is ccc responsibility to pursue a claim against pantycelyn. If anyone had a concern to would have been the education authority itself as the dispute was between them and the people. Or is mark james and co THE education authority as well?

Thank you for an excellent post about a shocking and scandalous situation. I believe a council may revisit a decision and rescind a decision, usually after a brief period of time. Although this decision wasn't by full council, was it? Or did they approve the decision by the executive board? I'm hoping that should the Welsh Assembly fail to address this and intervene to prevent this misuse of public money on a private matter, that a new council will take action following the May elections. I am greatly encouraged by Plaid's opposition to much of the recent abuses of power, and applauaded their (albeit somewhat overdue)motion of no confidence in the Chair after the People First members were blocked from bringing this. Plaid will be getting my vote this year - I hope it helps.

Thank you for your comments, Tessa. The decision was approved, behind closed doors of course, by the Executive Board. Because councillors had delegated these powers, there was no need for their approval.

One of the unsolved mysteries is whether the chief executive was present during those discussions. Clearly he had an interest in the outcome, and as Caebrwyn has pointed out, the minutes of the relevant meeting show that nobody declared an interest.

I dont know this is getting rather silly. At a time when the council are cutting back on vital life afecting things thay seem to be offering a blank cheque to the CE for a claim against a citizen who it appears is just a thorne in his side.

I can understand why the CC should fund his defence but not to take offensive action.

The CE is a proffesioanl man and presumably a member of an association or other "union" type organisation that would no doubt have a legal insurance segment as part of the membership. If he feels aggrieved why not sue privately if he feels his case is strong instead of placing much needed funds at risk.

The up coming election should be used to asses candidates attitude to vital public services.

Go on CE - if you are so aggrieved, risk your own money not ours we need it to keep homes open etc etc etc

I would like to read the "Exceptional Circumstances" in this case.

I don't see how this can possibly be an appropriate use of public money, but I would be happy for the Council to justify it, if they can...

This is not just a waste of public money but also a means to silence the public. Councils as a body cannot sue for libel but clearly can use their council officers to sue by proxy with our money.
The effect is that no-one wishes to offend or criticise in any way likely to lead to possible financial ruin, seriously restricting free speech and truthful comment or complaint.