Have you received a letter from that nice Mark James recently in his capacity as returning officer for Carmarthenshire? The chances are that you have, and that it will have told you that the system of voter registration is changing, but that you have been added to the new register and that you don't have to do anything unless your details have changed.

There are concerns that the new system under which people have to register as individuals rather than be registered by the "head of household", will lead to many more people not bothering to register. Time will tell, but in the short-term the vast majority of us will continue to be registered without having to lift a finger.

All of which makes Labour's latest leaflet drop in Carmarthen East and Dinefwr something of a mystery, with Calum Higgins telling readers that he is contacting them because "if you wanted to vote at any election, you couldn't - because you are not on the electoral register", before going on to reassure them that he can help.

This came as worrying news to some of the recipients of Calum's letter because they vote at every election, and had every reason to believe that they were registered. In fact, they were.


No doubt there is an innocent explanation for this, but unnecessarily worrying elderly voters and others who take their civic duties seriously looks like the sort of thing you would associate with those daytime TV ads or unsolicited text messages telling you that you may have a claim. Just text WHIPLASH to ..... 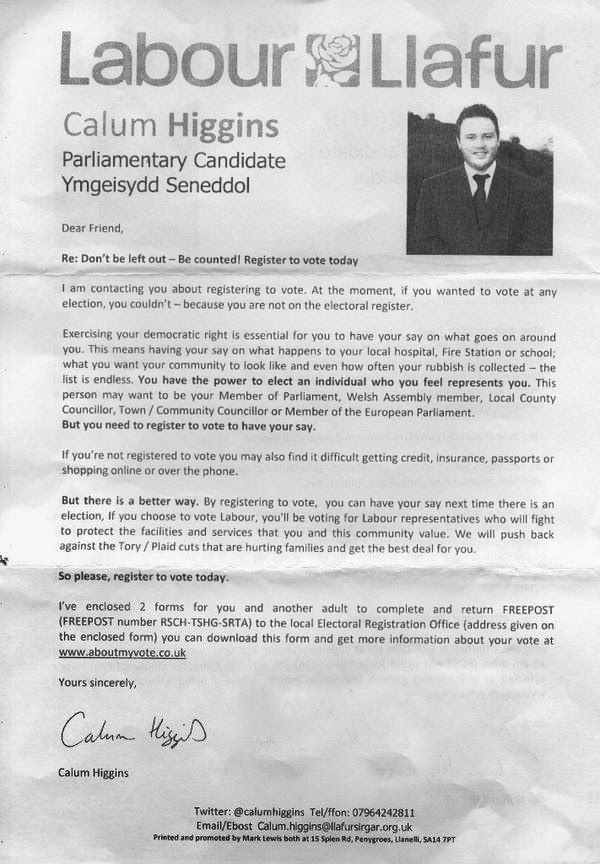 When my wife and I received ours they got me thinking. If people who move, or die, will still be on the electoral register then unscrupulous individuals and groups, especially in areas with fluid populations, have been handed another opportunity for electoral fraud.

The more I hear of young Calum the more I realise he is maturing into a typical Welsh Labour politician.

I think you miss the point. Voter registration now requires verification against a valid National Insurance number. Such is provided automatically if you are in receipt of benefits, housing or otherwise, or job centre assistance. If not, you are asked to provide.

No better way to promote fraud that providing your idiotic local council with yet more innocent information that it will lose, sell or mistakenly alter in some way.

Anon@13.06 - but it seems that just about everyone who was on the previous register is automatically going onto the new electoral roll, regardless of whether they receive benefits.

Anon 13.06 - no it does not require you to re-register. The former electoral roll is being transferred to the new one. You will only need to re-register if you moved house and did not inform the council.

All councils were told to use data-matching techniques (cross checking with other data) to find anomalies and lost addresses. The letters go out and then the law requires the Returning Officer oh, oh, Mr James) sends canvassers out physically to check non- registrations. It is a criminal offence NOT to send out canvassers though no Returning Officer has ever been indicted (there's always a first time ...).

Some councils haven't canvassed for 5 YEARS!

I'm intrigued by Calum's logic. He says "We will push back against the Tory / Plaid cuts that are hurting families".
My understanding was that the Tories and Lib Dems were in power in London, Labour in Cardiff and Labour/Independents in Carmarthenshire.

So how are these Plaid cuts unless Calum is doing that ever-so-subtle Labour trick of trying to link Plaid to Tory at every turn. Oh, how clever!

The legislation is quite clear. No genuine Carmarthenshire resident who is already on the electoral register is at risk of "falling off" it before the 2015 general election.and those recorded as being between 16 and 18 years old upon the previous register, who have now turned 18, will automatically be enrolled.

You do not have to have an NI number to vote, this is a myth. Resident Irish or Commonwealth citizens can vote in the UK parliamentary elections, and it is these people, who cannot be 'verified' by a cross reference to data held by the DWP and it is only these people who need to re-declare their registration, or those who have moved where the electoral role does not match the DWP address due to timing.

The only people who are 'at risk' of loosing their vote are those who vote from a location of a second home, where they are British citizens and are DWP registered at their working address, but vote at their second home address. This also can affect students. The 'fear' in parts of rural Wales is that these individuals will end up being registered to vote at their main working or residential address (England) and not in the constituencies (Wales) where they often vote.

A recent job sample study by the Political and Constitutional Reform Committee at Westminster found that 'volume' was an issue and highlighted electoral districts of Mid Devon, Torridge, West Devon, West Somerset and Taunton Deane as areas where they failed to complete discrepancies by sufficient numbers of home visits. It should be noted that these boroughs in England have a high proportion of second homes. I suggest some areas of Gwynedd, Conwy, Ceredigion (particularly), Pembrokeshire and Carmarthenshire are similar in nature.

All political parties and candidates have access to the electoral register. I wouldn't have thought that following the list on a piece of paper would have been too difficult. Clearly it was.